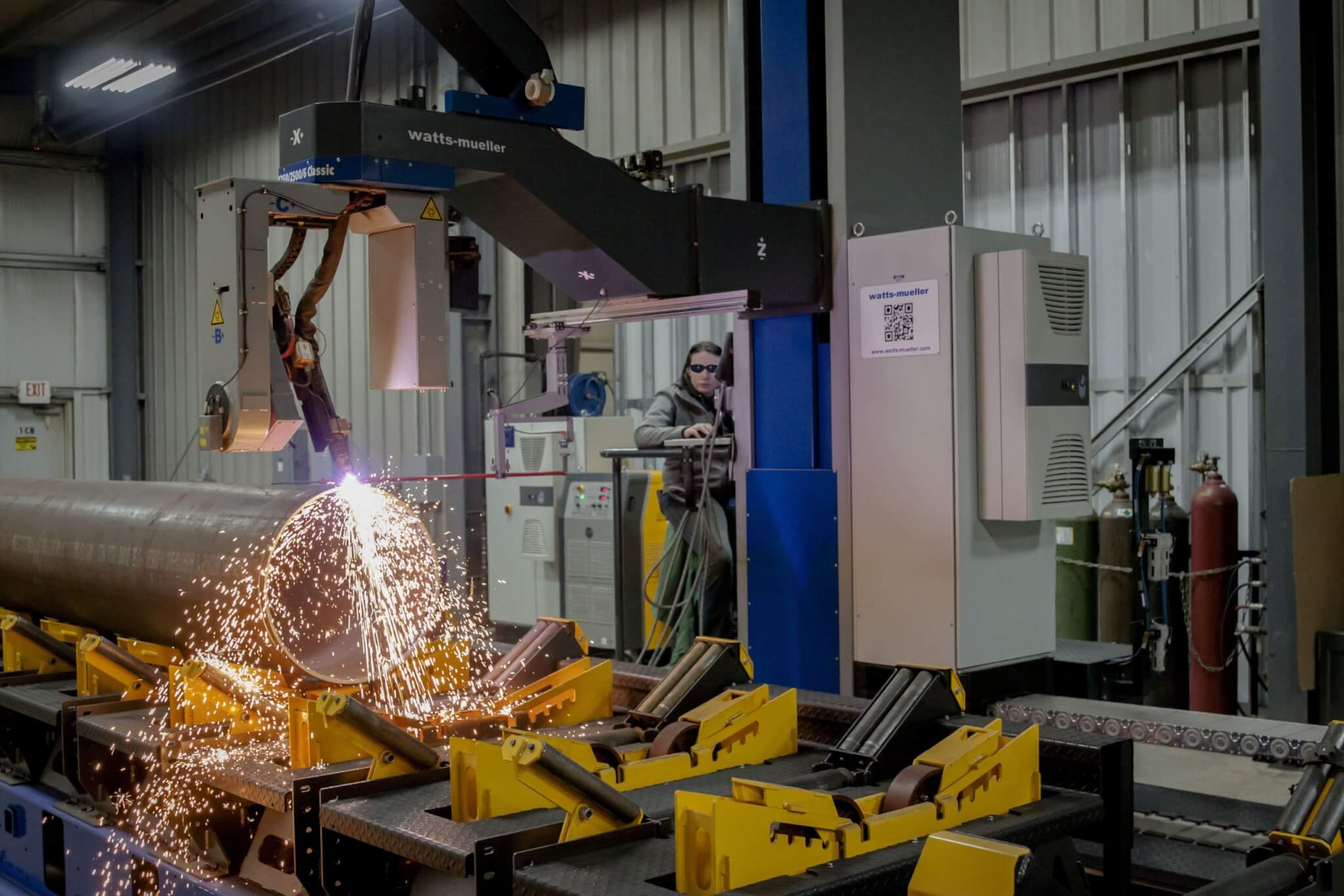 An operator rides on the cutting carriage of the Watts-Mueller WM-60, a system that allows Piping Systems to complete a job that once took seven hours in less than an hour.

Piping Systems Inc. invested in a Watts-Mueller cutting system when it became clear that its current tools were too slow for jobs involving large-diameter pipe. Using the WM Classic Series WM-60 6-axis pipe profiler, a job that once took seven hours to cut was complete in less than an hour. “We knew the ability to reduce cutting times so much would give us a competitive advantage and the investment was necessary,” said Piping Systems President Jeffrey Bunker.

Cutting large-diameter pipe can be cumbersome and time-consuming when done manually. After Piping Systems completed the largest project in its history—a 375,000-linear-foot project with diameters up to 72” and wall thicknesses up to 1.5”—the fabricator realized its current equipment conveyor system would not keep up in the long term. “The equipment’s conveyor we had at the time was only rated for a maximum 500 pounds per foot. There was no way we could run heavy-wall, large-diameter pipe,” said Tony Kent, vice president of Piping Systems.

Bunker added, “Our automated cutting process prior to the new equipment was limited to 42”. Anything more than that was manual or machine-cut, and it was a slow process. After we completed that first large-diameter job, we knew we needed to be able to cut three to four times faster than what we were capable of doing.”

Safety was also a concern, as large-diameter, thick-wall pipe is difficult to move by hand. To meet customer demand for heavy pipe processing, Piping Systems purchased a system from Watts-Mueller capable of managing 1,500 pounds per foot.

Previously, large-bore, heavy-wall pipe had to be brought in using forklifts, set up using the overhead crane or saw cut, then moved to a machine beveling operation. “With the added capacity of the WM-60, most of the large-bore, heavy-wall pipe can be conveyed inside the facility, cut and beveled by the machine, and flowed directly into production,” Bunker said. “There are very few touches by humans beyond that.”

The system is 180’ long and the largest setup Watts-Mueller has installed to date. It includes compatibility with drafting software, which allows Piping Systems to take cutting job files and import them directly to the machine to reduce manual input errors. “Our goal is to reduce input errors, and so the capability to export files from drafting software reduces overall error rates,” Kent said.

The WM-60 computer-controlled pipe cutting machine conveys and rotates pipe from 3” to 60” outer diameter with a 45’ machine bed capable of supporting 1,500 pounds per foot to a maximum of 50,000 pounds. Located in Puyallup, WA, Watts-Mueller produces 3D profile cutting machines for round pipes, tanks, dished-ends, square and rectangular pipes, and steel beams, as well as automated welding solutions. The company has over 1,743 machines located in Germany, the United States, Russia, the United Arab Emirates, India, Singapore, and Brazil.

Large projects require Watts-Mueller to visit a customer’s location to discuss requirements. “We need to see where the machine will ultimately be installed in their shop,” explained David Carr, managing director of sales and marketing. “We complete drawings based off those measurements and design a machine that is then submitted to the customer for approval.”

Watts-Mueller is capable of building 160”-diameter machines. Training time varies. “Generally, the install is two weeks for a system this large, and operator training takes one week,” Carr noted. “This learning curve is quite short. The fact that an operator with one week of training and a little practical experience can train other employees is a testament to how good the [software] user interface is.”

Software plays a large role in maintaining efficient machines and processes. Watts-Mueller’s software creates 3D contours as part of an integrated process chain. “Instead of creating the [drawing] as an isolated element,” Carr said, “with 3D-Profile Plus (3DPP), the machines work with both upstream and downstream workflows. This significantly reduces production time, material costs, and errors.”

The 3DPP CAD/CAM comprehensive system provides models cutting geometries, nests numerous parts to be cut on a single pipe, assigns cutting functions to one or several machines (while taking into account each machine’s capacity), keeps track of each stage of the working process for each machine, and calculates and records cutting times and costs.

Users can reference 3DPP’s extensive reporting functions for calculation or documentation purposes. “This robust software system can be fully integrated into any company workflow as an autonomous software system for the modeling of pipes or by importing drawings from a multitude of CAD software systems,” Carr said.

After a decline in new inquiries in 2020, Watts-Mueller has adjusted how it works with customers to keep projects moving. “By being flexible with pricing and payment terms, we have been able to maintain a backlog,” Carr stated. “We are cautiously optimistic for 2021. Inquiries were up in January, and conversations with prospects are positive—the indicators are good.”

Piping Systems believes its Watts-Mueller installation will be busy in 2021. “We’re expecting a pretty good year ahead compared to 2020,” Bunker said. “I think we’ll get over the COVID-19 hump by the end of the third quarter and expect things to be under control.

“We have relationships with other fabricators in place that even if we lost half our workforce we’d have a backup plan in place to continue to meet customer expectations without downtime,” Bunker continued. “We’ve learned to plan ahead for any scenario.”

Use Watts-Mueller’s calculator to estimate the return on investment of a new system: https://www.watts-specialties.com/contact-roi.php