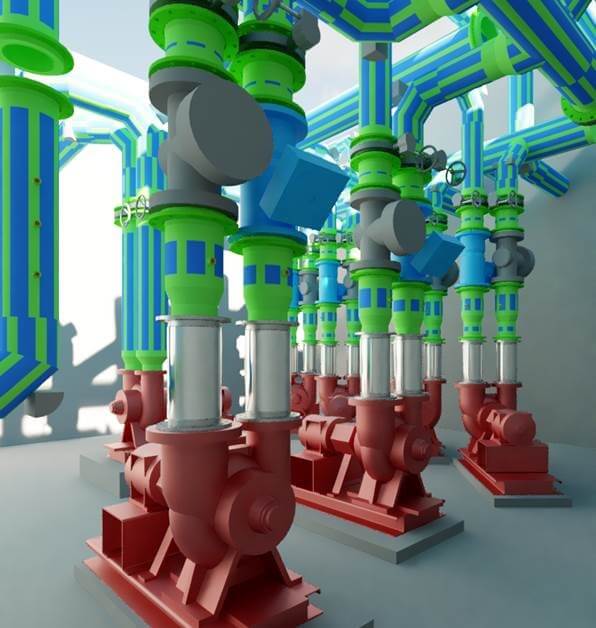 To produce a viable and cost-effective solution for the piping manifolds, Ferguson presented their new VDC services as design-assist. With their new VDC department, Ferguson is meeting demands by providing MMC with drawings, HDPE manifold fabrication, and an integrated planned delivery to the jobsite.

MMC chose to work with Ferguson because they became an integral part of the team early in the project. Everyone, including preconstruction, project management, engineering, design, and field supervision, quickly realized the value of the VDC services when Ferguson pointed out design conflicts on the contract drawings. Ferguson presented coordinated shop drawings and a BIM model as their recommendation for the build. Additionally, they made calculated recommendations for upgrading pipe sizes and wall thickness because of industry availability of the product.

“Ferguson project management, VDC, and fabrication teams were pivotal in creating a successful build strategy and truly acting as trusted advisors and not just a supplier.”

Brent Townsend, MMC operations manager, said of Ferguson, “I’m very pleased with their commitment to partnership. As a design-build contractor, the investment in the time it takes to plan and collaborate can be staggering. Ferguson project management, VDC, and fabrication teams were pivotal in creating a successful build strategy and truly acting as trusted advisors and not just a supplier. Their VDC capabilities set them apart from their competition. It’s reassuring to have a supplier that can partner at this level.” The partnership between MMC Contractors and Ferguson created the best solution for the client while introducing the industry to Ferguson’s new and expanded capabilities in VDC.

MCAA thanks Ferguson for being a sponsor of MCAA’s 2021 Virtual Education Conference.