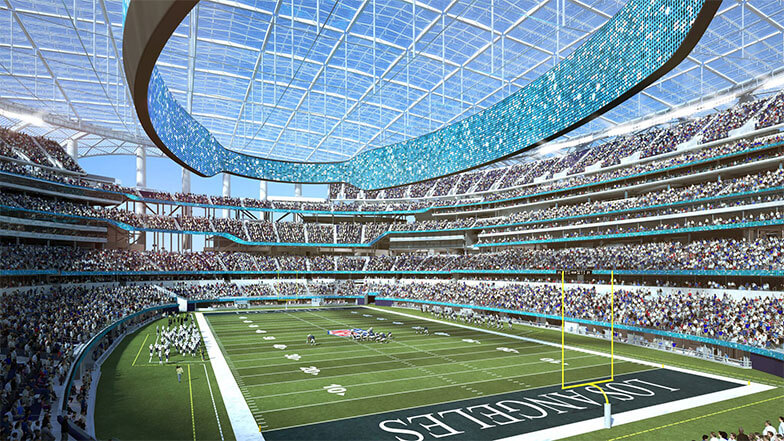 The Los Angeles Stadium and Entertainment District at Hollywood Park will be the home of the NFL’s Los Angeles Chargers and Los Angeles Rams as well as restaurants, hotels, offices, residences, and more. By coordinating closely with Smith, PPMC has been able to use prefabrication to keep its part of the building process on track.

Pan-Pacific Senior Project Manager Carl Wisdom and Purchasing Agent Andrew Glendinning will tell you that what particularly stands out in a job of this scale is the sheer volume of the plumbing involved—despite all their experience working on substantial projects.

Given that extraordinary volume, you want to do as much prefabrication work as possible, and that takes precise coordination and collaboration between all parties involved, from the supplier to the contractor, as well as other trades working on the project. The demand for coordination can be seen with something as standard as the installation of drains needed to remove water from the stadium’s seating area risers.

The stadium seating area of the arena was precast in concrete. Structural precast risers and tubs (the front row of each deck) were cast offsite in sections that stretched up to 45’ in length and weigh in at about 30 tons each. Then they were shipped to the stadium for installation.

Jay R. Smith Mfg. Co. scupper drains (1520T-G-U-SSM) were located in the tubs to remove water and debris running through the stadium during wash downs and weather events. The drains would eventually be installed in forms used to cast the concrete. However, they first needed to be prepped and protected for the pour.

To help speed up this process, Jay R. Smith Mfg. Co. removed the finished grate and added protection by covering the drain opening with fiberboard, then adding layers of tape to bring it flush with the precast. To ensure Smith understood the magnitude of what was coming their way (259 scupper drains) and to allow time to prep the drains as required, PPMC ordered the drains far in advance.

The prepped drains were then delivered to PPMC, which added the specified nipple for the waste portion of the pipe and protected the threads from concrete using a foam gasket. Once all the preparation work was complete, PPMC shipped the scupper drains for the pour. After installation of each section at the stadium, all PPMC needed to do was go in, make their connection, and install the grate onto the drains.

Coordinating on a Game Plan

The carriers, however, were a different story. To put things into perspective, the project has more than 2,700 lavatories, urinals, and toilets throughout the stadium, and each fixture required a carrier. Wisdom said PPMC elected not to preorder the carriers, as there was a good chance they would run into trouble nailing down the number of right, left, and back-to-back connections needed. If anything changed in the plans, they would then have to go back to Smith and revise the order.

It seemed like a good call at the time, but Wisdom said that decision led to a deficit of carriers when they were needed. While Smith knew precisely which types of carriers they would need to manufacture for the project, they also had to fight against the clock to complete the order. To add to that slow start out of the gate, Smith had to modify 75 percent of the carriers to fit the low-profile, floor-mounted back outlet water closets installed throughout the stadium.

To help PPMC meet their goals and avoid further delay, Smith preassembled every carrier by attaching the barrel, faceplate, and nipple before shipping. This way, once PPMC had the preassembled pieces, they could immediately start prefabricating each battery of lavatories, urinals, and water closets.

“Smith is jumping through hoops to get them to us on time,” said Glendinning.

Smith engineers said that PPMC would be the last customer to need modifications on the carriers to accommodate similar low-profile water closets that are appearing more and more on job specifications. Creating high-quality, contractor-
friendly products that help make a job go smoother and faster is a high priority for Smith. To that end, what were considered modified carriers for this job are now available as standard figures in the Smith catalog.

Marching Toward the End Zone

Ground was broken on the new stadium in 2015, and it is expected to be finished by 2020. Once it is complete, it will be the world’s most expensive stadium, coming in at just under $5 billion. The Los Angeles Stadium and Entertainment District at Hollywood Park will be the home of the NFL’s Los Angeles Chargers and Los Angeles Rams. It will also host Super Bowl LVI in February 2022, the College Football National Championship game in 2023, and the opening and closing ceremonies of the 2028 Olympic Games.