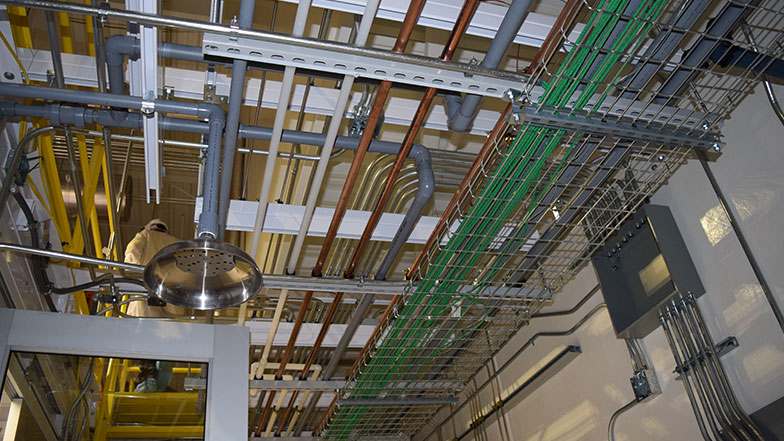 Arden Engineering Constructors relies on Trimble’s TX6 Scanner to capture a building’s MEP details much faster and more accurately than workers measuring by hand. Using RealWorks software in concert with their other BIM programs, they translate the data into digital models that are essential to effective planning and coordination among all the contractors involved.

For a recent retrofit, Arden Engineering Constructors knew that an accurate as-built assessment of the project was essential to ensure a smooth process, so they put their Trimble® TX6 Scanner and RealWorks® Office software to the test. The scan took one field worker about 4 hours, compared with an estimated 32-man hours for manual measurements—a labor savings of 90 percent.

Several years ago, Bill Cameron, building information modeling (BIM) manager for Arden Engineering Constructors recalled, the company began to see a substantial uptick in the number of RFPs for MEP and HVAC systems renovation and retrofit jobs, as opposed to new construction projects. As a first step, such work typically requires an accurate picture of preconstruction conditions. For every pipe and duct in a HVAC system, for example, there are numerous hangers, sleeves, and other components precisely positioned within the structure to support it. An as-built model gathers precise measurements for all relevant MEP elements of the building, so contractors can determine current conditions and assess the impact of the redesigned system. The conventional method for generating as-builts for MEP systems is to measure and record all components across the building site by hand. To modernize this process, Arden Engineering Constructors sought out 3D scanners and point cloud modeling alternatives.

Already a loyal user of Trimble technology, including Trimble PipeDesigner 3D and SysQue® for Autodesk Revit™ MEP, the team adopted the Trimble TX5 laser scanner and later the TX6 scanner along with RealWorks office software. They chose the Trimble TX6 3D laser scanner because it provided the speed, quality,  and range to make in-field data collection fast and efficient. RealWorks allowed them to create 3D deliverables. Arden Engineering Constructors estimated that the TX6 scanner paid for itself after about four projects with increased speed and
accuracy of gathering as-built preconstruction data.

“One of the biggest benefits of the TX6 scanner is the high-speed scanning and consistent accuracy. We estimated it would have taken about four days or 32 man-hours to complete an as-built assessment manually.”

Cutting Days Down to Hours

For a new and retrofit project for a small biopharmaceutical facility located in Cambridge, MA, Arden Engineering Constructors took on a project that included HVAC, controls, balancing and fabrication work, and the addition of a roof mezzanine. Phase 1 of the project required them to set up a temporary boiler and
chiller plant to service the existing nine-building campus, which featured 644,771 square feet of laboratory, office, and retail space across nearly eight acres. It also included all remodeled and installed duct work for the existing area and the addition to support the next phase of the project. Phase 2 involved integrating the chill water plant, new chillers, and new chilling towers.

Completing an accurate as-built assessment of the project was essential to ensure that retrofitting of additional MEP systems would not clash. Arden Engineering Constructors used the Trimble TX6 3D laser scanner to gather the precise 3D location of surfaces, HVAC components, objects, and duct work. Scans were conducted outside and indoors with scanning speeds of 500,000 points per second and a scanning range of 80 meters standard on most surfaces (and 120 meters with an optional upgrade). Cameron said each scan took approximately
seven minutes, and all the scans were completed over a four-hour period. During each, the scanner collected millions of data points, also called a point cloud.

“One of the biggest benefits of the TX6 scanner is the high-speed scanning
and consistent accuracy,” said Cameron. “We estimated it would have taken about four days or 32 man-hours to complete an as-built assessment manually.”

Cameron continued, “With the Trimble scanner, we had access to high-quality data fast, and we were able to quickly capture clean data even in bright sunlight. We scanned this project as sort of a favor to the contractor on site, so they didn’t have to put it out to bid. That saved them approximately $10,000 and helped us
secure future phases of the project.”

From Data to 3D

After the scan, the data were exported into Trimble RealWorks software to register, analyze, model, and create 3D deliverables. RealWorks essentially segments the cloud data into bite-sized pieces, which is easier for CAD modeling software to digest.

Using RealWorks, Arden Engineering Constructors modeled the point cloud’s specific MEP components and exported these solid objects to the 3D design package, Autodesk Revit, for finish detailing activities. The point cloud served as a starting point for MEP system detailing efforts and was used to determine the
project design impacts on the existing structure. Once the laser scan of point cloud data was converted, the team used SysQue to inject greater intelligence into the 3D BIM model. With SysQue, Arden Engineering Constructors was able to include real-world content in the design, including detailing, fabrication, manufacturing, and installation specifications. The model was viewed in Revit, then exported to Autodesk’s Navisworks software, which created a snapshot of the project including models, the scene’s environment, viewpoints and redlines, and measurements for coordination among trades.

“After we scanned the building, we forwarded that information on to the construction manager on the project,” said Cameron. “The point cloud from the scanner and RealWorks gave us a clear and accurate picture of what we were looking at for phase 2 of the project. We also liked that the point cloud data from the scan folded seamlessly into our Revit, SysQue, and Navisworks workflow.”

Cameron believes Trimble scanning technology along with the ability to convert point clouds into modeled 3D components help set Arden Engineering Constructors apart as a leading HVAC and MEP services contractor. The team can tackle complex projects for customers and offer comprehensive and innovative solutions that save time and money and meet the industry’s highest quality standards.

“We see the industry trending towards relationships, more than pure dollars and cents,” said Cameron. “Customers want to know that we can provide complete MEP services including balancing how our scope of work on a project impacts all other trades and the project’s overall cost. Trimble’s 3D scanner and software helps us do this and it fits into our BIM workflow. It’s just one more reason why we’re positioned much better to help customers in the MEP and mechanical services space because we’re thinking big picture.”