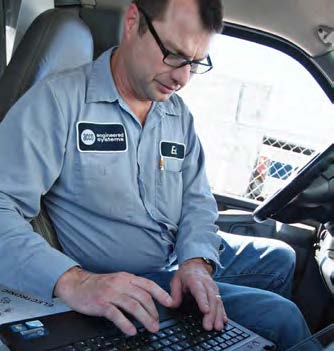 Using the MobileTech system by WennSoft, ACCO service techs electronically enter their labor at the end of each job in about a minute, then send it to the office with one click. The new technology helps ACCO streamline paperwork and run more efficiently.

In 2012, ACCO Engineered Systems of Glendale, CA, trained more than 200 service technicians to use its new MobileTech system, tailored for ACCO by WennSoft, and immediately realized more benefits from the system than expected. The new technology speeds up and even eliminates some paperwork and improves communication. By using the streamlined, electronic quoting features, ACCO has already realized a return on its investment in MobileTech.

Laying the Foundation for Mobile Success

ACCO has long understood the value of mobile technologies and has been planning a mobile strategy for years. Their first step toward a mobile solution began in 2005, when the company implemented WennSoft Signature, built on Microsoft technologies, as its new operational software solution. Chris Leu, director of information technology enterprise applications for ACCO, said the ultimate goal of the switch was to go mobile. “WennSoft had a complete system,” he said. “Even back in 2005 they had a mobile strategy.”

At the time, however, ACCO was not ready to add mobile capabilities. Instead, the contractor planned to hold out for better device options. Leu said, “In 2005 we didn’t have tablets, Androids, or iPhones. Back then it was very expensive and challenging to put that technology together.”

The administrative staff once spent every Wednesday inputting labor from work orders. Now they simply double-check the information as it is submitted, freeing them to focus on more valuable tasks.

By the end of 2008, ACCO was ready to add WennSoft MobileTech to its existing WennSoft solution. The company conducted a pilot run through at the beginning of 2009, with several goals:

Gathering valuable input from its service techs through the pilot program, ACCO worked with WennSoft to tailor the MobileTech solution to its needs. Leu said, “We worked with WennSoft to come up with a tailored screen, so the techs would see the same paperwork they were used to looking at for the last 25 years—just electronically.”

Increased Efficiency and Return on Investment

Following training of service techs throughout all locations in March 2012, ACCO saw the benefits of the switch to mobile. Because the electronic dispatch system automatically fills in the name and location for each job, the time to complete work orders was reduced. Many service techs can now process a work order in less than a minute, allowing more time to focus on customer needs.

Additionally, electronic dispatching reduced the number of calls in which the service techs arrived at an incorrect location. In the past, techs would rely on phone calls or pages to determine where to go. Phone calls were often misunderstood or pagers, limited to 240 characters, would not show the complete address, leaving the techs to guess the location.

Additionally, electronic dispatching reduced the number of calls in which the service techs arrived at an incorrect location. In the past, techs would rely on phone calls or pages to determine where to go. Phone calls were often misunderstood or pagers, limited to 240 characters, would not show the complete address, leaving the techs to guess the location.

Through MobileTech, ACCO has also met its initial goals. Service techs electronically enter their labor at the end of each job, rather than doing paperwork at their leisure and driving to the office to turn it in. “The techs can spend a minute on each job to enter labor, and with one click, it is sent to the office,” said Leu. “After that, they don’t have to worry about the call anymore. That’s a pretty big advantage.”

By entering labor in the field, service techs also relieve the billing team. The administrative staff once spent every Wednesday inputting labor from work orders. Now they simply double-check the information as it is submitted, freeing them to focus on more valuable tasks. “The company used to shut down from a service perspective every Wednesday,” said Leu. “It was a big weekly challenge to process payroll, especially when you have about a dozen locations and a couple hundred techs.”

With real-time information, ACCO can now bill on a daily basis, rather than its previous two-week schedule. The sales team also benefits—they can access information that they can act upon daily, rather than waiting 10 days for the information to become available. “It improves our visibility of what’s happening on a service call, so we can be a lot more proactive,” said Leu. “I know our sales team likes it, because I hear from them right away if the system ever goes down.”

Furthermore, the solution streamlines the quoting process. Previously, service techs would fill out work authorization forms for recommended repairs they identified while on a job.

“The electronic quoting has paid for the entire project. The nice thing is we’ll get that return every year, minus maintenance and the cost of replacing equipment.”

The techs would then hand the forms to an administrator who, in turn, gave them to a project manager or sales member to analyze and discuss with the customer to get approval for the work. Now, when the techs electronically submit a quote, it bypasses the administrator and goes directly to the appropriate person. This saves administrative time, eliminates the chance of losing paperwork, and enhances the opportunity for new business.

ACCO hardly deals with paperwork through its fully integrated system. All documents are automatically filed in WennSoft’s document imaging system and immediately show up on sales reports, which saves the company the time of tracking down paperwork. “There’s almost no touching of a piece of paper,” said Leu. “We used to have nice, extensive filing systems at all our locations, but most of them have been shut down for two to three years.”

Through these efficiencies, ACCO has achieved a quick return on investment from its MobileTech solution. “The electronic quoting has paid for the entire project,” said Leu. “The nice thing is we’ll get that return every year, minus maintenance and the cost of replacing equipment.”

Overall, ACCO finds that the mobile solution adds value to the company. ACCO is growing without adding resources, and its staff is now dedicated to more valuable tasks rather than re-entering information or moving paperwork around the office. Leu said, “Ultimately, it improves what we can deliver to the customer.”