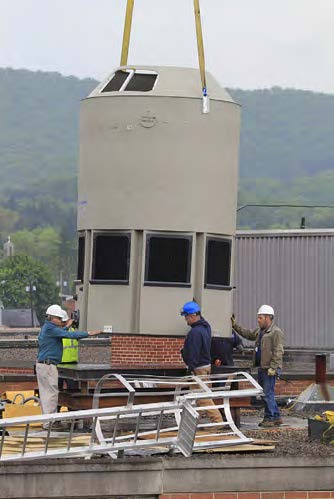 Such was the case with Davis Memorial Hospital. A subsidiary of Davis Health System, the 160,000-square-foot hospital was founded in 1904, fully renovated in 1994, and is now undergoing an expansion of 72,000 square feet. The modern hospital includes a 90-bed medical facility, with nine intensive care and 36 telemetry (monitored) beds, with services ranging from emergency treatment to acute inpatient care, cancer treatment, diagnostic services, pulmonary rehabilitation, women’s health services, and many types of surgery

Like many building owners, the hospital management was looking for more advanced cooling tower technology that would optimize performance while minimizing maintenance requirements.

“I researched various cooling tower technologies on the Internet and found a unique line of cooling towers that features a seamless plastic shell,” explained Steven Johnson, director of Davis Memorial Support Services. “The one that attracted my attention was a line that was made of HDPE, manufactured by Delta Cooling Towers. Of course, there were a lot of other models available, but most of them seemed to be the metal-clad design.”

For many cooling tower users, metal-clad models have become outmoded because they are vulnerable to corrosion from salt air, industrial gasses, and even the chemicals used to treat the recirculating water. Conversely, HDPE cooling tower shells are virtually impermeable to corrosive elements, including water treatment chemicals such as chlorine, as well as ultraviolet rays.

A Closer Look at New Technology

Johnson and engineers from Davis Memorial decided to visit the Delta Cooling Tower manufacturing site for a plant tour so that they could get a closer look at the design and building of the manufacturer’s product line, which includes models ranging from 10 to 2,000 cooling tons.

“We were all impressed with the plant tour,” Johnson said. “Not only was management helpful in explaining the features and benefits of various product models, but they also helped us confirm our preliminary specs for the cooling towers we had in mind. We were quite surprised to learn that this line of cooling towers was about 20 percent less expensive than many conventional designs.”

Johnson was also pleased with the standard warranty offered on all products. While many metal-clad cooling towers are warranted for only one year, the HDPE-based cooling tower shells from Delta carry a standard 15-year warranty. The Davis Memorial team selected a 250- ton TM Series unit and a 180-ton Paragon Series tower.

While avoiding downtime and unscheduled cooling tower maintenance were critical requirements for Davis Memorial Hospital, other features of the Delta design also had significant value.

“The variable-speed, direct-drive motors that run the fans on our new towers also provide unexpected benefits,” Johnson said. “First of all, these drives are far more efficient than we initially realized. The fan motors on our old towers were 30 horsepower each and consumed considerably more energy than the new ones, which are only seven horsepower each and at least 50 percent more energy-efficient.”

Johnson explained that the hospital’s old fan motors were either on or off. With the new variable-speeds drives, they are set up so that they only run at 100 percent on hot days.

“The new direct-drive fans are usually running at about 40 percent,” Johnson noted. “Running at 100 percent, they are only pulling four amps, which is much less energy than before.”

Johnson added that the new direct drives are also far less maintenance intensive, which results in even greater savings. With no belts, shafts, bearings, or other external parts to service, the direct-drive motors are virtually maintenance free.

Another important benefit of the new direct drive cooling towers is that they run quietly. “Drives using belts often require adjustments, or you will hear them squeal,” Johnson explained. “We’re a hospital, so quiet is expected. Also, we’re located right in the middle of a residential community. In the past, we received complaints from people in the neighborhood if the belts were squealing, particularly if it happened at night when they were trying to sleep. That was a serious problem, so our maintenance people often had to fix the belts in the middle of the night. With the direct-drive fan motors, we don’t have that problem.”

John Flaherty, president of Delta Cooling Towers, estimated that with the hospital’s combined savings on energy, water usage, maintenance, and chemicals, the payback for the new cooling towers should be within two years.