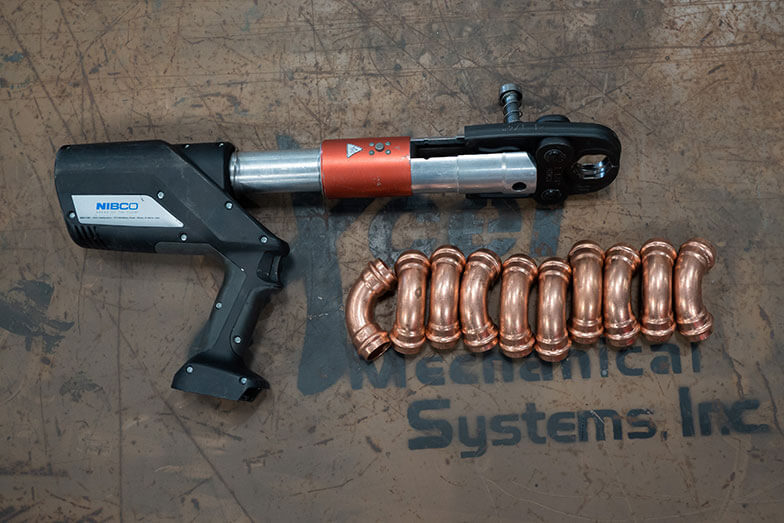 Xcel Mechanical estimated saving as much as 40 percent in labor on some aspects of an aerospace laboratory renovation project by using NIBCO Press fittings and valves.

Xcel Mechanical Systems estimated saving as much as 40 percent in labor on some aspects of an aerospace laboratory renovation project by using NIBCO® Press fittings and valves. Xcel, based in Gardena, CA, was hired to design and build the mechanical, plumbing, and process piping elements to expand and modernize an occupied research and development facility in southern California for one of the nation’s largest aerospace firms. NIBCO INC. is a sponsor of MCAA’s 2021 Virtual Education Conference.

“Leveraging press technology mitigates the inherent risks of working with open flame within an occupied space,” said Jason Gordon, Xcel Mechanical’s vice president of operations. “We chose NIBCO Press for this job for multiple reasons, including safety, time and labor savings, and aesthetics,” said Gordon, whose firm has been a preferred design-build mechanical contractor on the sprawling campus for more than two decades. “NIBCO is a proven brand name in our industry. That’s important to us because the products we select are a reflection on our company.”

The total renovation project included remodeling existing laboratories located on the ground floor of a three-story, 1960s-era research and manufacturing facility. These laboratories must allow for constant redesign and reconfiguration to meet the specific requirements of each new contract award. The owner’s primary goal was to convert the subdivided laboratory space into a large open floor plan, creating the opportunity to build out a modern, flexible, and scalable “factory of the future” that would maximize the total available 160,000 square feet of laboratory and manufacturing space and 57,000 square feet of office space.

“[Using the NIBCO Press], we saved a minimum of 30–40 percent on labor on some parts of this job, and significantly more on other parts.”

The building was stripped down to concrete on all four sides, exposing what was left: columns, high ceilings, and slabs. The original building design included old stanchion supports with piping and electrical systems running up from the floor. To free up valuable floor space, the new design features steel overhead utility racks that now run 500–600′ across the exposed ceiling for a nice, clean application. Major mechanical and plumbing systems were removed and redesigned to align with the new design.

In this facility, the mains on the overhead utility distribution racks are sized from 2″ down to 3/4″. Separately, the HVAC system has chilled water and heating hot water lines measuring up to 4″ in diameter. Some of those lines drop down from a chilled water system located on the roof that serves a newly installed air handler.

“Typically, we would use steel for those 4″ lines,” Gordon pointed out. “But since the piping ran down an existing shaft, there were safety concerns around welding or grooving the 4″ steel. And then there was the weight factor and what would be required to run steel pipe down that shaft versus copper,” he said.

“For these reasons, my foremen advocated for the additional material spend on copper. Obviously, the material cost is considerably more but we felt the safety benefits and labor savings would offset it,” Gordon said. “We are a strong believer in getting perspective from our foremen. If they support the plan, believe in the products they are installing, and it makes sense financially, then it’s a win-win.”

Gordon said using NIBCO Press on the project also meant not having to go through the facility’s hot work permitting process, which typically adds time to any project. “The customer liked that the NIBCO product removed a certain level of risk—and also the smell of soldering and flux—from an operational lab environment,” Gordon noted. “So, in the end, our customer was happy. Our safety team was happy. And our field personnel were happy.”

Gordon confirmed that NIBCO Press is easy to install, which helps reduce labor costs while keeping projects on schedule. “Material is material, but labor is what makes or breaks a job,” Gordon stated. The project’s process piping system consists of three copper lines, one each for compressed air, nitrogen, and industrial vacuum systems. Each run is 400–500′ long and includes multiple connection points.

Gordon said the press product made working in smaller areas and also making multiple connections overhead much easier from both a safety and labor efficiency perspective. “We fabricated a fair amount of material used in this job, but with a multitude of small overhead connection points located 6–12′ apart along these lengthy runs, the copper press solution was key. We saved a minimum of 30–40 percent on labor on some parts of this job, and significantly more on other parts,” he said.

Through the life of the project, the ongoing challenge was to build safely around the 100–200 employees who were working in the laboratory areas. The project’s four-phase approach called for temporarily relocating employee teams into other parts of the facility while completing construction one section at a time. “Using NIBCO Press not only reduced labor time, but it shortened shutdown periods, allowing us to get the building back online sooner.”

Although functionality and flexibility played an important role in modernizing this facility, creating a visually appealing space was also a consideration, Gordon said. “Aesthetically the NIBCO Press product is a good-looking product and a clean application overall,” he said. “For nitrogen systems, we would typically purge and braze, and afterward the copper is oxidized. When we install press, the copper looks brand new. It’s a good look.”

As the project nears completion, Xcel Mechanical will continue to use NIBCO Press systems to maintain their reputation for high-quality workmanship.

MCAA thanks NIBCO INC. for being a sponsor of MCAA’s 2021 Virtual Education Conference.