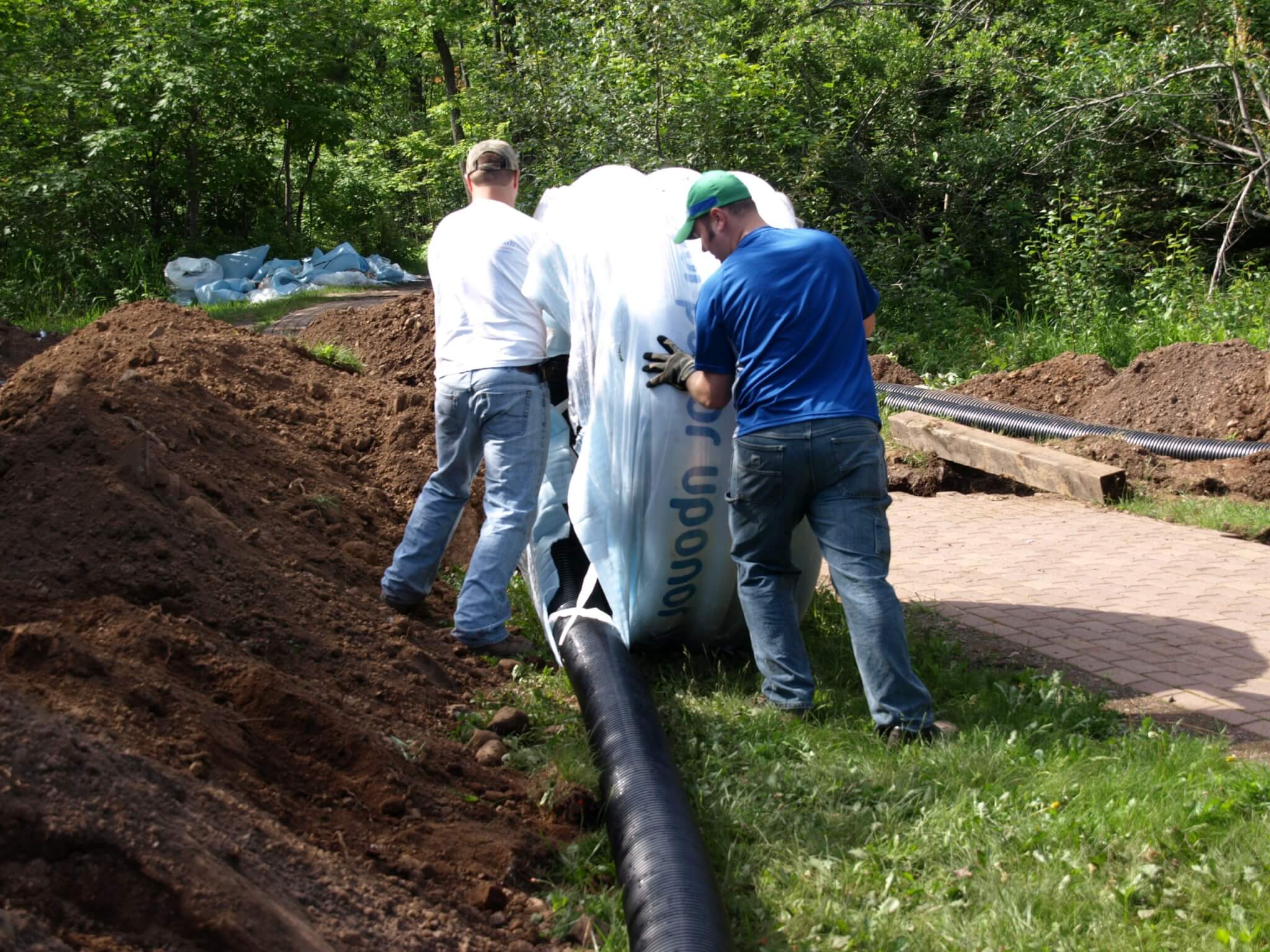 The Uponor Ecoflex piping called for by McKinstry was easy to install. Workers laid 950’ of piping in one phase of the Wolf Ridge repiping project and 1,350’ in a second phase, both in just one week.

Wolf Ridge Environmental Learning Center in Finland, MN, is a nationally accredited K–12 school and residential educational center for outdoor learning adventures. The campus, which spans more than 2,000 acres of forests, inland lakes, and streams, is located in one of the northernmost areas of the nation—where winter temperatures can fall well below zero for months at a time and snowfall accumulations can total more than 100” for the season.

The first buildings constructed on the site included two classroom buildings, an administration building, a dining hall, and a dormitory, totaling 61,000 square feet. All the buildings, with the exception of the Science Center, were heated via four 3,200-gallon cordwood boilers in a remote district heating plant located approximately 500’ north of the dining hall. Each boiler featured a simple aquastat controller to circulate the energy through the underground loops.

An underground fiberglass piping network distributed hot water to heat the buildings through air-handling coils. The fiberglass pipes were insulated with ½” urethane foam and covered with polyethylene black plastic wrap. The Science Center building was heated via an in-slab hydronic radiant floor heating system that received local electric off-peak energy for the heating supply source. The Science Center could not be part of the underground distribution loop because the ground was complete bedrock and would have required additional soil to bury the district heating piping.

The entire district heating system seemed to work well upon initial installation. However, over the first winter, the heat loss to ground was so significant that it melted the snow pack above the distribution lines. So, Wolf Ridge placed 2” polystyrene foam above sections of the piping system that were experiencing the greatest heat loss. Although this initially helped, within a few days into the heating season, the heat-loss problem was again obvious—as demonstrated by a melted path in the ground.

A few years later, Wolf Ridge added a second dormitory. This time, instead of using fiberglass for the underground distribution loop, the center decided to try another product it hoped would offer better insulation. The product, Uponor’s Ecoflex, featured PEX service pipe surrounded by PEX foam insulation and covered by a corrugated HDPE jacket.

The product allowed increased flexibility because the different layers could “move” independently from one another. It also allowed easier accessibility to the service pipe because the PEX foam insulation was not adhered to the service pipe. The project used 1,223’ of 2½” Ecoflex to supply district energy for heating and domestic hot water to the 23,000-square-foot east dormitory.

After deciding on the product to use for the underground distribution piping, Wolf Ridge also needed to consider which application would be best. The center considered several options provided by McKinstry during the energy audit. Based on McKinstry’s recommendation, management decided to upgrade the existing boilers and replace the distribution system.

Gulbranson Excavating of Eveleth, MN, dug the trenches for the new pipe, and Shannon’s Plumbing of International Falls, MN, along with members of Wolf Ridge staff and engineers from Uponor, installed the Ecoflex system. The project included 340’ of 2” supply and return pipes in a single jacket and 610’ of 3” single pipe in a jacket.

The Ecoflex pipes came in long coil lengths up to 600’, which meant the installers did not need to stop often to make connections. They used a large uncoiler to lay the pipe in the trench efficiently in just one week.

McKinstry recommended mounding the backfilled material over the pipe to distribute surface water runoff, which was especially important as springtime water percolating through the soil created some of the most challenging conditions with the fiberglass pipe.

When it came time to install the second phase of the repipe for the west dorm and education building, the consistency of the Ecoflex system allowed a fast, efficient installation that met the same one-week construction schedule. The west dorm repipe used 180’ of 2” supply and return pipes in a single jacket and 1,170’ of 4” single pipe in a jacket.

The first winter after the installation, Wolf Ridge saved approximately $7,000 in fuel supply costs—just on the wood alone. The consumption of wood dropped 21.5 percent from a yearly average of 200 cords to 157 cords—and that was during an extreme winter. Reducing consumption by 43 cords per year offered Wolf Ridge an annual savings of approximately 190 birch trees (140,000 lb.) and 860 million British thermal units (MBtu). The energy cost savings were even greater when adding in reduced labor costs of feeding and removing the ashes from the wood-fired boilers.

An Education in Energy Efficiency

Following the repipe, Wolf Ridge replaced the cordwood boilers with two new biomass wood pellet boilers to bring even greater energy efficiency to its campus. The new system is a pressurized, closed-loop system operating at 22 psi. The old cordwood boilers were only operating at 50 percent of their maximum efficiency because of corrosion buildup on the heat exchanger. The new boilers increased capacity by 58 percent from 1.9 MBtu to 3.0 MBtu while reducing the volume of water needed to store the energy by 75 percent (without including the distribution system volume).

In addition to its new district energy system, which now includes domestic hot water, Wolf Ridge has added a solar thermal domestic hot-water system, working in concert with the biomass in the east dorm. The center also benefits from a 1.2-kW solar photovoltaic system and a 10-kW wind turbine that together supply 20 percent of the Science Center’s electrical needs.

As an educational facility, Wolf Ridge uses these new energy-efficient resources to teach its students about the importance of district energy, renewable energy sources, and sustainability. It also demonstrates how solar and biomass energy sources can help increase energy efficiency.

“Everyone at Wolf Ridge is so passionate about the sciences and teaching others about the importance of energy efficiency and natural resources,” said Smerud. “I’m very proud of the work we do here, and I’m glad that our new energy systems will allow us to continue providing education in an energy-efficient environment for decades to come.”

For more information, visit www.uponor-usa.com. MCAA thanks Uponor for being an MCAA sponsor.