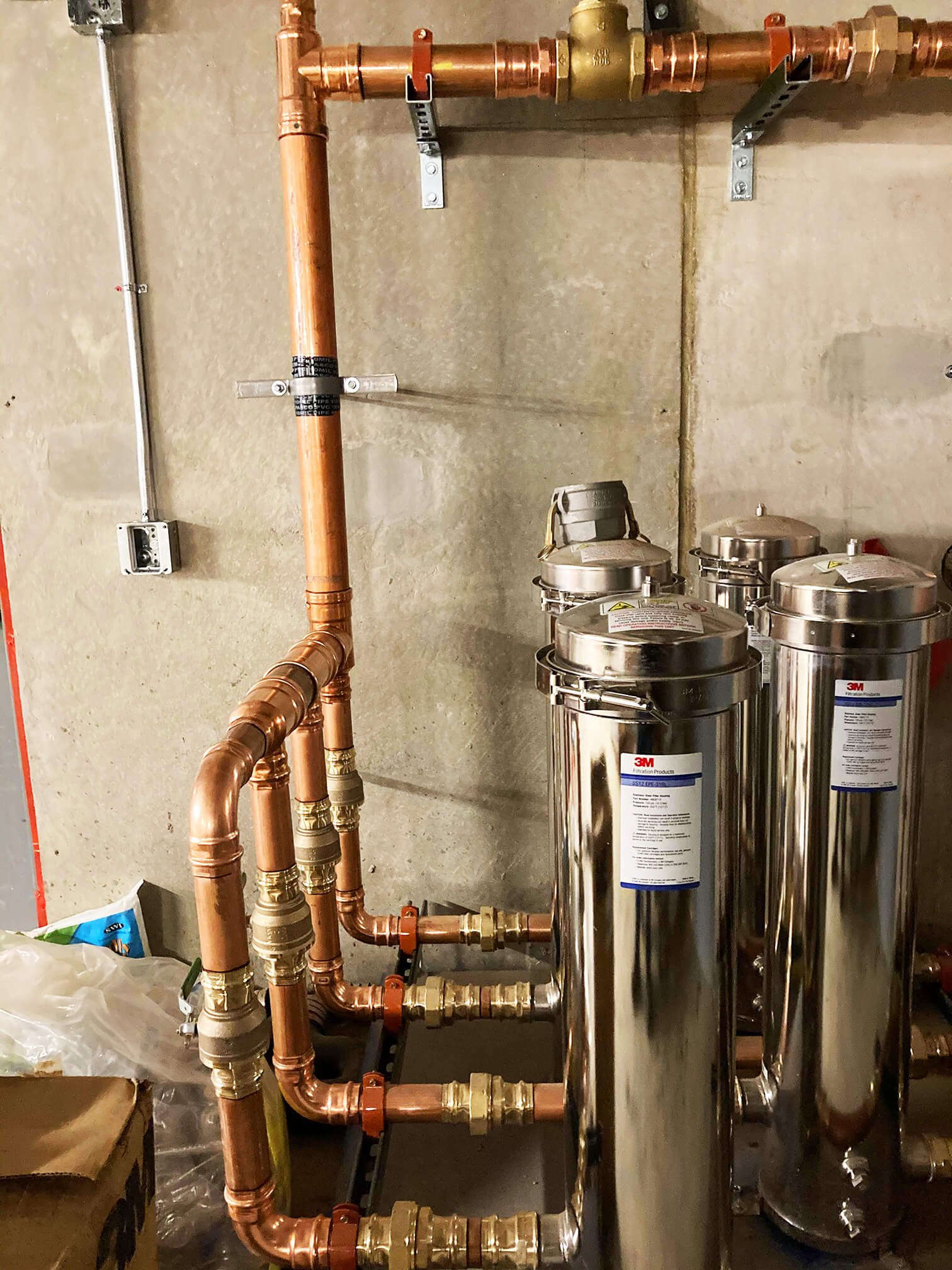 By using Viega ProPress fittings throughout the Summit Complex, Olson managed to get all the plumbing and piping in place in the short window of time allotted during the summer of 2020.

Prefabrication was just one of the ways that Olson Plumbing and Heating leveraged Viega ProPress to take on a mountain of a project: building a new visitor’s complex at the summit of Pikes Peak that met strict environmental standards … during the COVID-19 pandemic.

Building the new Pikes Peak (Colorado) Summit Complex, situated at 14,110 feet in elevation, put Olson crew members at the highest ongoing construction site in North America. The challenge of simply breathing at 14,000 feet in elevation, where the air is exceptionally thin, is tough enough. But add in the manual work done on a construction site, plus weather and COVID-19 precautions, and the jobsite becomes exceptionally challenging. Workers had to pass full physicals; they were equipped with personal oxygen cans and watched each other closely.

“Any given day, you can almost guarantee that somebody on one of the crews—whether ours or someone else’s up there—would get altitude sickness,” said Dom Wilson, field foreman for Olson. “We worked in the buddy system so you could recognize if your partner was not feeling well. What you think is a slight headache is really an attack of the altitude, and you need to get down to 11,000 feet and be evaluated by an EMT.”

The Summit Complex will replace the Summit House, built more than 60 years ago, and at 38,000 square feet, the new build involved a lot. For contractors who had the ability, prefabrication of anything possible at a lower elevation was all but a necessity.

The folks at Olson will tell you they use Viega ProPress as often as possible, but using it on a job like the one for “America’s Mountain” was extra important. Viega’s press technology requires no soldering, welding, or threading. Connect your pipes with a press fitting, use a battery-operated press tool and jaws to complete the press in seconds, and move onto the next joint. It is fast, clean and simple.

For the Olson crew, the ability to prefab so many of the pieces at their shop in Colorado Springs meant there was less work to do at altitude. Sections of pipe were trucked up the mountain on special trailers purchased by the general contractor, GE Johnson Construction Company. Crippen said the trailers had movable axles to get through the switchbacks on the steep road to the top.

But before Olson could even think about putting together sections of pipe using ProPress, they first had to pass special specifications. The Summit Complex was constructed to meet the Living Building Challenge (LBC), one of the most rigorous proven performance standards for buildings. Olson and the other subcontractors had to undergo a strenuous submittal process to ensure their products were accepted by the LBC. Viega certifies many of its products, including ProPress, to the stringent LBC requirements.

Work on the new Summit Complex began in 2018 when existing central utility plants were demolished and a temporary utility plant for blackwater was installed to keep the old Summit House operational during construction of the new building, about 100’ away.

“Midsummer was a big race to get all of the in-floor heat in and get the foundation done and the building footprint excavated,” said Crippen. “We were really close—three weeks before the weather shut us down.”

Regular Colorado weather, which can fluctuate from 30º F to 70º F in a day, pales in comparison to the weather at the top of a fourteener (what Coloradans call the state’s 58 peaks that are 14,000’ or higher) like Pikes Peak. While the temperature in Colorado Springs near the base of the mountain might be 30º F and sunny, the summit temperature is likely to be −20º F with howling winds and nothing to stop them.

With potentially treacherous weather conditions, crews working at the summit had to be on their toes all the time. Crippen described spring and summer lightning storms as “unbelievable” and noted that when lightning appeared within 20 miles, everyone had to shelter in place to stay safe.

The added curveball of COVID-19 safety restrictions complicated the project further. The logistics of getting everyone up the mountain safely, with vehicle capacities and mask requirements, was tough. Olson’s crews began plumbing and piping in the summer of 2020. With a short window to get everything to the peak and in place, the clock was always ticking in the background.

For the wastewater treatment facility at the summit, Viega ProPress Stainless connects the settling tanks and reclaimed water system. Blackwater is captured and treated through a chlorine ultraviolet light filter process. After about a year, the graywater can be reused to flush the toilets in the Summit Complex.

“This is not like your average gravity system for drainage!” said Crippen. “It’s a vacuum system like in an airplane or cruise ship. It’s part of the LBC and the green building, to be able to reuse materials. This build will be the first of its kind.”

Settling tanks at the peak separate the waste solids, which are pumped out to a truck (through copper with ProPress fittings) and taken down the mountain. The rest goes into other settling tanks where the treatment process begins.

Inside the Summit Complex are 37 water closets and 18 hand sinks. All of the bathroom facilities are serviced through copper with ProPress fittings. The entire building is heated from two electric boilers with 12 zones of in-floor heat, and the heating water is also supplied via ProPress. The building has three sump pits to handle what Mother Nature provides, and that runoff water is pumped out through copper and ProPress as well.

Each year, more than half a million people visit the summit of Pikes Peak. The new three-story Summit Complex will feature a large walkway as well as multimedia exhibits to tell the story and history of the mountain. These indoor and outdoor exhibits will also educate visitors about the climate and geography, recreational opportunities, and conservation initiatives—like those of the LBC.

Take a tour of the construction of the new Pikes Peak Summit Complex: https://coloradosprings.gov/pikes-peak-americas-mountain/page/pikes-peak-summit-complex-project?mlid=10251

Final construction work was completed at the Summit Complex in early 2021, and visitors were welcomed on June 24.

For more information, visit www.viega.us. MCAA thanks Viega for being an MCAA sponsor.