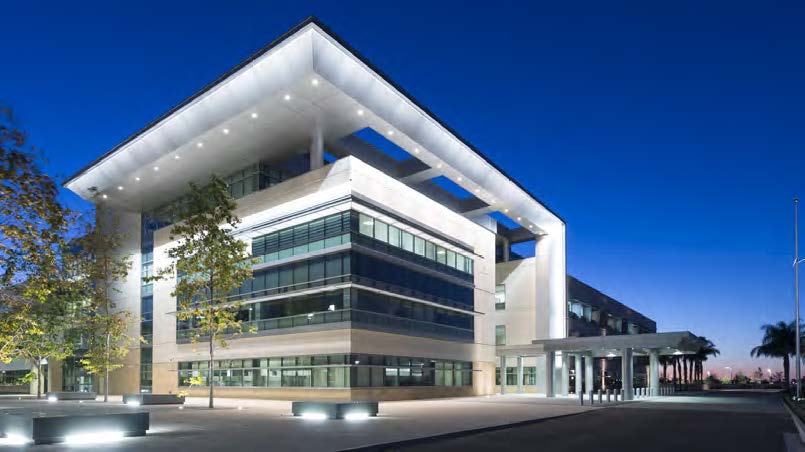 The Camp Pendleton Hospital Replacement Project had a budget of over $450 million. The 70-acre site includes a 500,000-square-foot, multilevel medical hospital; a central utility plant; a 1,500-space multilevel parking structure; surface parking; and supporting facilities. The new hospital replaced the base hospital at Lake O’Neill, which was built in 1969.

“The project schedule was exceptionally fast; it was a very aggressive schedule,” said Chris Young, project manager for Pan-Pacific. RPM also faced extra layers in the project’s chain of command. Navy construction is run through the Naval Facilities Engineering Command (NAVFAC), and a Resident Officer in Charge of Construction oversees the build.

For any other hospital in California, Pan-Pacific would typically operate under the California Plumbing Code. But because this was a U.S. Naval facility, RPM instead had to adhere to the International Plumbing Code as well as a multitude of other unique requirements mandated by NAVFAC.

Among those unique requirements, RPM had to take into consideration antiterrorism measures. “Terrorism on a military base is a big concern,” said Young. The storm and overflow drains had to be sized to accommodate over 3″ of rainfall per hour according to the 100-year storm statistical assumptions. “You have a very large-diameter overflow drain, up to 6–8″ in diameter. There was concern that someone could push a bomb in there from the ground level.”

Jay R. Smith Mfg. Co. custom-designed a downspout nozzle with a perforated latching stainless steel hinge cover that could be locked to prevent someone from inserting an object into the piping. Smith has since added the new design to their catalog, and it is now available as a standard offering. Young was so pleased with the clean look of the downspout nozzles that Pan- Pacific now uses them on other projects.

Pan-Pacific also eliminated the threaded nipple connection often used on the downspouts. “With the exterior of the building and the inside wall tight against one another, it was hard to get enough space between the sweep and the cow’s tongue to utilize a threaded nipple. Smith engineered the downspout nozzle so there are set screws around the perimeter of the downspout nozzle, which threads tight against the pipe, and the nozzle fits over the pipe to save space,” said Young.

Part of NAVFAC’s mission is to build and maintain sustainable facilities. Innovations used at the Camp Pendleton Naval Hospital include green roofs, photovoltaic cells (solar panels), solar hot water panels, and horizontal and vertical sunscreens. It is estimated these innovations will help to reduce energy consumption by 30 percent compared with a typical hospital.

The green roof at the Camp Pendleton Naval Hospital uses the Inverted Roof Membrane Assembly system, which must be installed over a structural concrete deck because of its weight. The green roof drains required staging. The drain bodies were initially installed on the job to make the concrete pour, and the tops (with perforated mesh screens) were shipped and installed later. All of the staging and shipping was coordinated to meet RPM’s schedule.

The drainage off a green roof surface is particularly important for maintaining optimum growing conditions for the plants, managing heavy rainfall without sustaining damage to growth due to erosion or pooling of water, and ensuring the sound engineering and structural integrity of the roof. Young explained that the selection of the roof drains was also important because of the hospital’s proximity to the Pacific Ocean and the aggressive nature of the air. The roof drain systems would not only have to withstand harsh weather but also hold up to the saltwater in the air.

While the weather conditions can be harsh on the top of a roof, down on the ground things are a bit different, especially in Oceanside, CA. The hospital design takes the temperate climate into consideration and provides an abundance of outdoor space for patients and their families.

RPM turned to Smith to design a custom, stainless-steel, hot and cold water connection box. The custom-made box was set flush in the wall, which provided convenient hookup connections to hot and cold water service and sewer discharge when the kiosk was in use. The Camp Pendleton Naval Hospital construction project spanned four years. The hospital officially opened January 31, 2014.