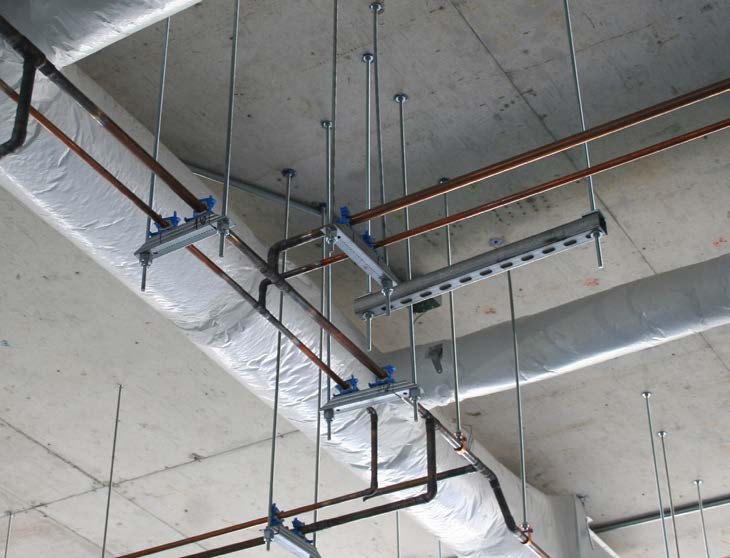 Top: By using CADDY Telescoping Strut Replacement, DSI did not have to cut strut, which saved time and also allowed them to avoid disturbing patients while remodeling a hospital.

Faced with the need to minimize noise and limit work to daytime hours for a hospital remodeling project, Dynamic Systems, Inc. (DSI) prefabricated as much as possible, calling on CADDY products from Pentair to get the job done and also saving time on the jobsite. The project called for DSI to add a floor to the hospital while the hospital was still serving patients.

Denny Gosser and the other DSI project managers meet regularly with the prefab shop to discuss how they can be more efficient on the jobsite. This constant examination of their means and methods has led to DSI becoming one of the top mechanical contractors in the booming Austin, TX, market.

Before concrete decks were poured for the hospital, the DSI team positioned preset anchors, located by using building information modeling (BIM) as well as GPS and laser-guided location solutions. Because the overhead anchors were installed before the concrete was poured, Gosser eliminated much of the timely hammer drill use that would normally be required on such a project.

DSI used CADDY ROD LOCK, a threaded rod fastening system that is available in a lot of different configurations for a multitude of applications. Unlike traditional methods that involve hours of threading nuts or other hardware onto threaded rod, with CADDY ROD LOCK, the assembly is lifted and locked into place, saving DSI valuable jobsite time.

The DSI team prefers to use a CADDY ROD LOCK Telescoping Strut Replacement, or TSR, for light-duty trapeze applications. The TSR is a strut profile that telescopes to accommodate rod spacing from about 12″ to 20″. “We really liked the CADDY TSR200RL,” said Gosser. “It’s much easier than dealing with 20’ sticks of strut everywhere. We also don’t have to cut strut, so we saved time there, and it also didn’t disturb the hospital.”

“Now that they’re available,” said Gosser, “we’ll use the CADDY ROD LOCK preset anchors for similar applications in the future. These anchors allow the threaded rod to be pushed in place, rather than threading it in. This way you can preassemble the hanger to the rod, then just shove the rod into the hanger.”

Another example of adopting an innovative solution to solve a very common problem is Gosser’s use of CADDY SLOT LOCK clevis hangers. Unlike a traditional clevis hanger, CADDY SLOT LOCK has a rigid bar that slides in place to join the two halves of the hanger, rather than threading a long bolt through the hanger halves and into a nut on the outside. Additionally, Gosser noted that CADDY SLOT LOCK makes the job easier for the installers. “It minimizes fatigue and maximizes safety as well,” he said. “The guys spend less time with the pipe on their shoulder, but also less time with their hands off the ladder.”

When asked about the reaction of the installation crew to these new solutions, Gosser said, “The team recommended using the same stuff on the next hospital.” When it comes to applying innovative products and techniques, DSI knows what they want. “We have the set of materials that we like to use, and it’s all CADDY stuff,” said Gosser.