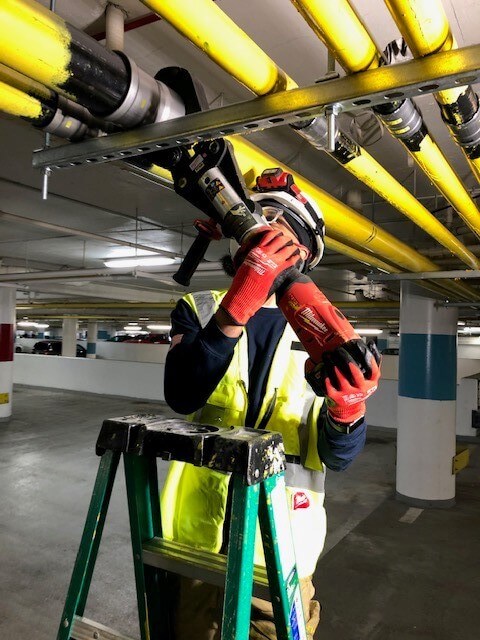 For CRW, located in the Washington, DC, area, the project “wins” include the following:

The Press Tool installation meant a gain of about 25 minutes every time one of the job’s 300-plus Viega® MegaPress® XL® fittings was installed. In total, the Press Tool saved the CRW crew 125 hours—more than five days—on the project.

Work started during the COVID-19 pandemic, but Columbia Gas of Virginia had been eyeing the large undertaking for years. The parking garage, located at a Worldgate Plaza office building in Herndon, VA, was built in the 1980s with indoor gas meters. The utility needed the meters moved to the exterior.

Utility managers were motivated to get the long-delayed project done. A Columbia Gas line had been placed on the property five years earlier, and the line was just sitting there—dead. The utility contacted CRW and asked for a price. However, CRW’s original bid for an all-weld project was considered too high.

Rudy Ford, president of CRW, was evaluating solutions to get the deal done when he viewed a Milwaukee Innovation display during a socially distanced mini-trade show sponsored by the Mechanical Contractors Association of Metropolitan Washington. Talking to Sales Representative Hyojon Robbins at the event, Ford saw 4” cordless “jaws” on a table. Ford commented, “Wow, that’s ProPress for copper,” and Robbins replied, “No, that’s up to 4” MegaPress for steel.”

Inspiration struck Ford. Milwaukee’s products were the solution for the parking garage project. Robbins confirmed that the tool is fully compatible with 2½” to 4” Viega MegaPress XL fittings for steel pipes. Ford said, “I literally left the tool display, came back to the office, and repriced the job that same day based on labor savings.” Robbins worked with Viega to go over the features and benefits of the tool, and Ford consulted with partners at Viega, too.

“I wanted my guys to work,” Ford said. “It was during COVID-19, so the garage was empty. We needed the work, and this was an opportunity to make the price attractive to Columbia Gas.”

Ford lowered the bid 15 percent based on labor savings alone. “We just went for it,” he said.

Because welders use an open flame even in tight spaces, a hot work permit is required, along with a second person for fire watch. These steps are not needed with the Press Tool, and neither are materials such as welding gas, filler material, torches, or cords. With welding, a wet system must be drained. The Press Tool using XL rings connects wet systems, skipping the draining stage and saving time.

Even during COVID-19, a few dozen cars were parked in the garage. Safety precautions in an open, active parking garage include protecting vehicles by cordoning off areas. Screens are set up to shield pedestrians from possible arc flash. Smoke and exhaust from welding must be cleared out of the air. Because CRW used the Long Throw Press Tool, none of those precautions were needed on the jobsite.

CRW Foreman A. J. Hodges summed up the advantages of the new approach. “We worked with 5,000’ of pipe on 19 different lines. Pressing made the whole job easier. The Press Tool made a dramatic difference to me and the work, plus it was easy to use,” said Hodges.

Hodges, a welder, put the project finish time into perspective. “If I had been welding, I’d only be a quarter of the way done.” He confirmed that no gas leaks were found in presses made on the 5,000’ of pipe. Ford added, “The gas company likes the results. They take pictures every time they’re out there.”

For more information, visit www.milwaukeetool.com. MCAA thanks Milwaukee Tool for being an MCAA sponsor.