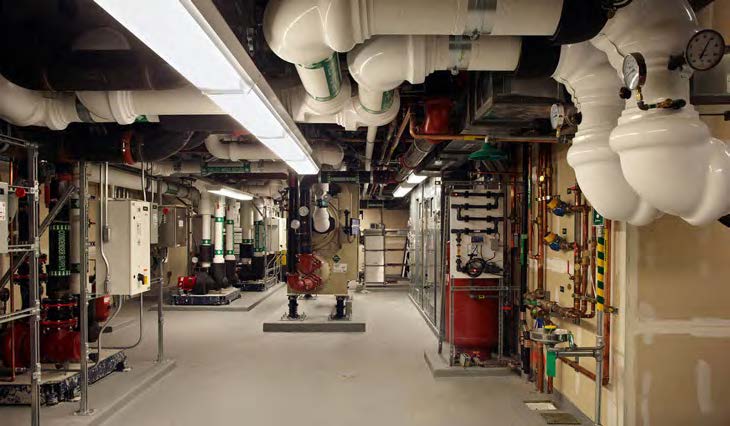 “This was not a standard job,” said Keeling. “The sheer volume of paperwork involved, including owner-directed changes and requests for information, was huge due to the complexity of the systems. Everyone on the team worked well together.”

Solar and wind power, high-efficiency mechanical systems, natural ventilation, and daylight harvesting all contribute to the remarkable energy savings at 525 Golden Gate. The exterior of the building uses roof-mounted solar arrays and wind turbines that can generate up to 7 percent of the building’s energy needs. On the interior, additional shading devices control glare and minimize heat gain while light shelves facilitate daylight harvesting. Lighting and work station equipment shut off automatically after hours.

After factory-certified testing to AHRI Standard 550/590 for water cooled chillers, two Daikin McQuay Magnitude chillers were selected for the building, one 500 tons and one 250 tons. With magnetic bearing compressors and integral variable frequency drives, these chillers are 40 percent more energy-efficient than traditional centrifugal compressor chillers. Their performance allows the building to satisfy varied operating conditions efficiently, especially at part load, which occurs frequently in the mild San Francisco climate.

The SFPUC headquarters houses more than 900 employees and includes a data center in the lower level, a childcare center, and a café. The SFPUC estimates that building and owning its new headquarters will allow the department to save local residents around $3.7 billion ($500 million in 2012 dollars) over the expected 100-year life of the building.

A Traditional Mechanical System With a Modern Twist

The building’s underfloor air-distribution system accommodates data lines and most of the ventilation infrastructure, including air-handling equipment as well as linear and swirl diffusers in the floor that supply air for cooling. The building envelope includes operable windows that occupants can control. If a window is opened, the building automation system shuts off the flow of conditioned air through the underfloor system to the corresponding zone.

With all the efficiency measures, the building’s design exceeds ASHRAE 90.1 requirements for energy efficiency for heating and cooling in new office buildings by an impressive 51 percent.

The approximately 10-foot by 30-foot mechanical room is a partial 14th floor where the chillers were installed. “The rigging requirements included setting the chillers in place and anchoring them down based on the seismic data as calculated and signed off by the structural engineers and architect,” said Keeling. “The chillers, which themselves are seismic compliant, had to be anchored to undertake a seismic event and isolate the vibration between the chillers and the building.”

From the building elevators to the waste water treatment system to solar and wind systems, a comprehensive Integrated Building Management System monitors and helps to manage approximately 13,500 data points collected from every building system. This system makes all HVAC-related information—including the plumbing and fuel oil system—readily accessible.

Another unique advanced system is an on-site grey- and black-water treatment technology called the Living Machine®, which reclaims and treats all of the waste water from the building to meet the demand for the building’s restrooms. The Living Machine can treat 5,000 gallons of water daily, reducing per-person water use from 12 gallons to five.

The SFPUC building has generated widespread enthusiasm from San Francisco residents. Public tours of the facility that began in June quickly reached capacity. The SFPUC encourages self-guided tours of the building lobby, where visitors can view the digital arts wall and read about the sustainability and architectural innovations of 525 Golden Gate.

MCAA thanks Daikin for being a major sponsor of MCAA 2013.