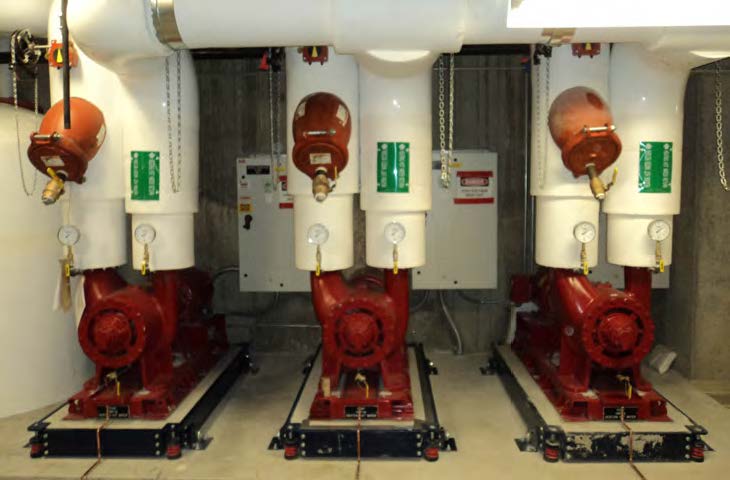 For U.S. Engineering Company, finding creative ways to keep the University of Colorado Hospital’s (UCH’s) new expansion on track helped them increase productivity while delivering on schedule and on budget. To maximize productivity, U.S. Engineering decided on a multi-trade prefabrication process using Victaulic grooved systems whenever and wherever possible.

As baby boomers age, demand for healthcare services is surging. As a result, healthcare construction projects are bigger, more complex, and have shorter timelines than ever before.

“The UCH project was extremely aggressive based on the large volume of materials in a compressed timeframe, so pre-planning and creativity were needed in order to be able to perform well on the project,” said Scott Hager, associate vice president at U.S. Engineering, who was responsible for field operations on the project. “We had a 12-month critical path for all of the multiple trades to rough in, and we were anticipating the possibility of multiple shifts, seven-day weeks, and a great deal of overtime.”

U.S. Engineering is a 120-year-old, full-service mechanical contractor that has served the Rocky Mountain region for more than 40 years from its Loveland, CO, location. One of the firm’s fabrication shops is located in Aurora, near the UCH 12-story Inpatient Tower. Work on a second inpatient tower began in early 2011, with a facility opening date set for March 2013. U.S. Engineering was responsible for installing the sheet metal, mechanical, plumbing, and piping system for the 734,000-square-foot project. The $400-million state-of-the-art building doubles the size of the facility’s emergency department and, when fully built out, adds 276 more beds.

The UCH project had two mechanical rooms in the basement. One housed the heating water and domestic hot water equipment and the steam generators; the second contained the chilled water and domestic water system equipment. A third mechanical room on the fourth floor housed large air-handling units and supporting accessories. All the chilled water and steam were drawn from the central utility plant owned by the university.

“We took steps to incorporate Victaulic grooved technology where we hadn’t before and that helped with speed and ease of installation so we could successfully deliver on this fast-track project.”

The speed and ease of use of grooved technology in the fabrication shop wasn’t the only attribute that helped U.S. Engineering maximize productivity on the UCH project. The company also credits a variety of benefits associated with the prefabrication process. For the UCH project, prefabrication created a controlled environment that made for more ergonomic working conditions and better quality control. Also, the construction team’s use of multi-trade fabrication increased efficiency throughout the entire construction process. By collaborating with the general contractor and all trades—from mechanical plumbing, piping, and duct, to fire protection, electrical, gypsum board, framing, and controls—team members fabricated and assembled entire sections of corridors and headwalls at the U.S. Engineering prefabrication shop. Once the sections were complete, they were loaded on a truck and delivered to the jobsite for installation. This construction method allows multiple parallel activities to occur, resulting in faster completion times, reduced costs, reduced site safety risks, increased quality, and improved project performance.

U.S. Engineering had prefabricated with grooved pipe-joining previously, but the UCH project was the first project on which it incorporated primarily Victaulic technology. As a result, grooved systems were used in a large portion of the major mechanical and large bore piping, including pump equipment work, headers, and connections, where the company had previously used welding. U.S. Engineering incorporated Victaulic Advanced Groove System couplings for quick and easy large-diameter connections, check valves, straining devices, butterfly valves, stainless steel systems, and flexible and rigid couplings. QuickVic® 107H Couplings with proprietary Grade “EHP” gaskets rated to 250° F (121° C) for unmatched performance on hot water systems were also included, as well as Style 607 QuickVic® copper couplings and Style 47 Dielectric Waterway fittings that served as a transition waterway between copper and stainless pipe.

“We took steps to incorporate Victaulic grooved technology where we hadn’t before and that helped with speed and ease of installation so we could successfully deliver on this fast-track project,” said Hager. “We definitely saw faster installation times in the mechanical rooms that were highly complex, and we were able to eliminate spool pieces of so many flanges by replacing them with Victaulic grooved couplings and valves.”

Hager, who began working with grooved mechanical couplings in 1989, said there were also big benefits in the quality of the completed product over welded flanges. “I have a lot more confidence in not experiencing leaks using grooved couplings. They are a lot quicker to install and are a great product.”

According to Bret Russell, superintendent at U.S. Engineering, who is responsible for managing the fabrication shop, the firm’s pre-planning paid off. No additional shifts and limited overtime were needed to complete the job successfully. And Russell would know. He measures the fabrication shop’s productivity by calculating per inch of pipe used, per hour, per day.

“We were able to groove approximately 29,200 diameter inches for the UCH project from November 2011 through August 2012. And that’s while also prefabricating for two to three other similar-sized jobs,” said Russell. “Welding and flanging can’t even compete. Grooved is more than six times faster, which is a considerable labor savings and a tremendous boost in productivity.”

By using mostly Victaulic grooved mechanical systems in the fabrication shop for the plumbing and piping, Russell’s team saw other cost-saving benefits. “We reduced the need for welding and soldering consumables and various equipment parts,” he said. “These types of savings are increasingly more important as jobs become more demanding.”

Using grooved systems also played a significant role in increasing safety in the shop. Mike Parker, project manager at U.S. Engineering, noted that the ability to take assembly off of the jobsite and into the fabrication shop in a controlled environment reduces the amount of field fitting and exponentially increases safety over welding. It also allows changes in the field without a big impact on labor. “With grooved, there’s no cutting or grinding to create sparks and flames like welding,” said Parker. “You don’t have the added dangers associated with welding, soldering, and brazing, and that’s important when you take safety as seriously as we do.”

Hager agreed, saying, “Victaulic is much less accident-prone than heavy flanges and large heavier lug style valves that we’ve used in the past. I have no doubt that grooved offers safer installation than welding.” He added that because grooved reduces labor, exposure to injury also decreases.

U.S. Engineering was recently recognized by the Colorado Division of Labor with an Excellence in Safety Award for their outstanding commitment to workplace safety and workers’ compensation cost containment. “Ensuring a safe working environment” is among U.S. Engineering’s core values.

“We were able to groove approximately 29,200 diameter inches for the UCH project from November 2011 through August 2012. … Welding and flanging can’t even compete. Grooved is more than six times faster, which is a considerable labor savings and a tremendous boost in productivity.”

Hager, Russell, and Parker all felt that prefabricating with Victaulic grooved technology was the right fit for the UCH installation. The company believes so firmly in using prefabrication as a competitive advantage that they now begin all projects by identifying what cannot be fabricated in the shop.

“Jobs are going to continue to get larger, harder, and faster, and for healthcare projects like UCH, thinking outside of the box and using prefabrication is the way of the future to meet budgets and tight schedules,” said Parker. “Anything we can do to speed up the process ahead of time and offsite keeps us competitive. Using grooved couplings from Victaulic gives us a leg up and will definitely be part of our strategy for future projects.”

MCAA thanks Victaulic for being a major sponsor of MCAA 2013.