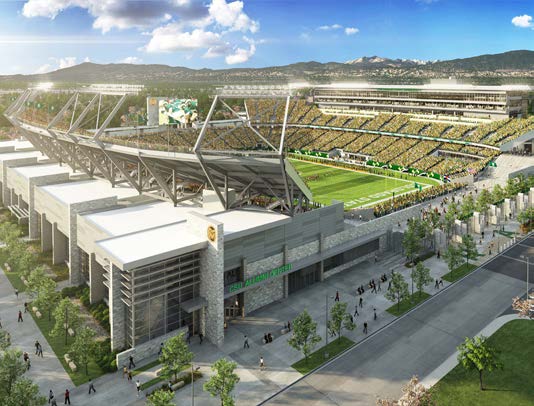 Using a variety of Zurn products prefabricated to specification, U.S. Engineering saved at least 10 percent in labor costs as they roughed in a new stadium for Colorado State University.

By consulting with U.S. Engineering during the design phase, Zurn had exact dimensions, allowing them to devise customized, engineered solutions where the carrier banks and stabilizer plates were going to be installed. In addition, prefabrication reduced installation time and made installation easier. With prefabrication, systems can be tested before shipping, so the contractor is less likely to spend time fixing problems onsite. “It was very helpful to have Zurn as a partner for a project of this scale,” said Barnett, whose firm has worked with Zurn many times in the past. “They are the front-runner for many reasons, and it’s always really good to work with them.”

Colorado State University’s new stadium will be an on-campus, multipurpose facility. It replaces the current 32,500-seat Sonny Lubick Field at Hughes Stadium, located about four miles off campus. The new stadium will also be named after Sonny Lubick, the university’s famed football coach who led the Rams to six Mountain West Conference titles and nine bowl games from 1993 to 2007. In addition to football games, the new stadium also will host other sports, entertainment, civic, cultural, and commercial events. It will also serve as the home of additional athletic offices and training spaces.