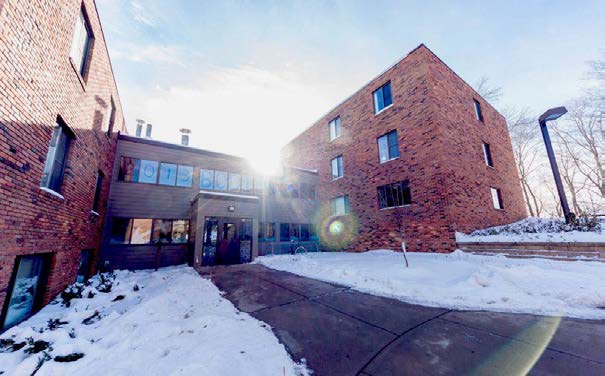 By installing Daikin Applied highly efficient Rebel rooftop units, Egan Company overcame time challenges and space constraints, providing Bethel University with a more effective, energy-saving solution to its HVAC needs. Installation of the units was phased to meet the university’s budget and had to take place when dorms were not occupied. Egan Company had to use existing openings on the roof. The units were installed in August 2013, August 2014, and March 2015.

Bethel University, a topranked, evangelical Christian university based in St. Paul, MN, needed to replace rooftop equipment original to two nearly identical residence halls built in 1977. “One of the driving forces to replacing the old units was trying to get better ventilation, drier air, and make it more comfortable inside the dorm rooms,” said Chuck Broz, HVAC technician supervisor at Bethel University.

The four-story Bodien residence hall sits on a hillside and is connected to the three-story Edgren hall by a common student lounge in the middle of the complex. While the dorm rooms in the 52,720-square-foot complex are served by existing McQuay (now Daikin Applied) fan coils (many of which were replaced in the late 1990s), student life, showers, and the variable Minnesota climate meant the existing rooftop units that supply dedicated outside air had to work extra hard to keep pace.

Selecting the highly efficient Rebel rooftops allowed the university to bypass using large amounts of chilled water from its central chiller plants in a two-pipe system to take advantage of the direct expansion (DX) technology in the new Rebel rooftop units. “One of the biggest reasons we selected the Rebel units was to get, from the DX side, significant efficiency while being able to put in the reheat air with very little moisture content,” Broz said.

The seven-ton Rebel rooftop units provide high part-load efficiencies at 20.6 IEER (integrated energy efficiency ratio), which surpasses ASHRAE’s 90.1 standard by 84 percent. “Rebel has some of the highest IEER ratings in the rooftop market because of the inverter compressors.

In combination with the energy recovery wheels (ERWs), these units are 60 percent more effective at removing moisture from the air,” said Matt Dodds, applications engineer at Daikin Applied.

Broz credits the mechanical installation services by Egan Company along with the Daikin Service Group as critical to the success of the project. “Everyone’s level of effort— including installing new curbs, pulling the old equipment off, and installation of the electrical and hot water lines—made this a very efficient and well-done installation job,” Broz said.

In addition, two of the Rebels—one on each of the buildings—feature Daikin’s Intelligent Equipment® control solution for real-time data that benchmarks performance and monitors system operation. “Our energy managers use Intelligent Equipment to gather data, and we use it to see the detail of operational data and monitor the units. We also appreciate that we can connect remotely to the units on laptop or smartphone,” Broz said.

Bethel University administrators and its students are pleased with the comfort levels. Broz said the difference in humidity levels across the two buildings was dramatic in the early operation of the new Rebels in one residence hall versus the other that still operated with the original rooftop equipment. “We’ve maintained everything below 55-percent humidity with the Rebel unit. With our existing equipment, we were well over 80-percent humidity throughout the building space, even with the fan coils in the dorm rooms, because various doors are left open.”

Quiet, unimpeded operation adds additional quality to the student’s studying and living conditions. Broz noted that the extremely-low-audible output of the Rebel units goes unnoticed by students. “The Rebel units are very quiet due to the inverter compressor technology,” he said.

Energy savings are significant given reduced natural gas consumption with less reliance on the chiller plants that serve the complex as well as the reduced electrical consumption of the Rebels versus existing rooftops.

Notably, the ERW technology on the Rebels (which heats up outside air) provides significant energy savings, especially during Minnesota’s cold winter months.

Broz recommends Daikin for not only HVAC equipment, but also service solutions, adding, “The Daikin Service Group crew is very good, and we appreciate that they call to make sure the equipment is running well.” Bethel University was so pleased with the performance of its Rebel units that it ordered a new four-ton Rebel rooftop unit to serve its new, state-of-the-art wellness center, which houses its fitness center and exercise science program and opened in fall 2015.