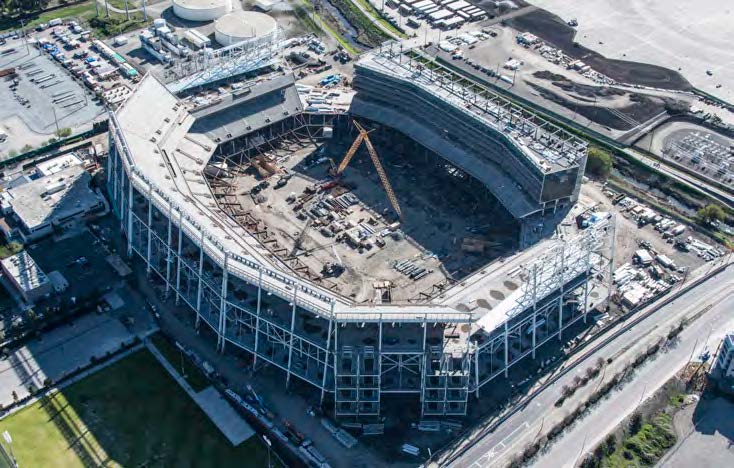 Building a new professional sports stadium would typically take at least three years, but Levi’s Stadium was completed in just over two years, thanks to contractors like F. W. Spencer & Son, who used a massive prefabrication effort and prefab-ready products from Jay R. Smith Mfg. Co. to meet the short deadline.

Usually, a contractor gets everything approved and then starts the project. But for Levi’s Stadium, timing was everything. All aspects of the work had to be done efficiently and quickly. F. W. Spencer & Son was able to manage multiple complex tasks occurring all at the same time. To keep the project moving quickly, Jay R. Smith Mfg. Co. got the materials requested together and shipped them before they were even needed on the job.

“We built the entire job basically in a warehouse,” said Steve Sandkohl, project manager at F. W. Spencer & Son. That meant every battery, every fixture location, and all the rough-in plumbing work for the concessions and restrooms were completely built and fastened right into a concrete slab in the prefab warehouse. Jay R. Smith Mfg. Co. Quarterback Water Closet Supports were designed with prefabrication in mind. F. W. Spencer & Son chose them based on anchorage requirements and ease of mounting to shipping channel for transport to the jobsite. Levi’s Stadium was the first project to use the new Quarterback Water Closet Support.

Because F. W. Spencer & Son was building as much as possible ahead of time, how to transport the finished build to the stadium was a key consideration in choosing the materials. “It doesn’t do any good to do prefab if you can’t safely transport without damage,” said Sandkohl. “A lot of the decision-making on elements we used weighed all those factors.”

Once everything was air-tested and complete, F. W. Spencer & Son cut the finished installation into manageable sections to be transported to the jobsite. Because everything had been staged with precision, it was a case of simply coupling everything together onsite.

The job also called for modified heavy-duty trench drains to be installed on both sides of the field, specifically in areas where heavy equipment would be moving in and out of the stadium. Once again, Jay R. Smith Mfg. Co. moved quickly. They designed a heavy-duty grate to go with the trench drains that could withstand different load ratings. Ninety-foot sections were shipped to the staging warehouse where all the channels were connected together for each layout. Each section was framed and bonded together. The trench drains were then lifted onto flatbed trucks with cranes and taken to the stadium.

The prefabrication allowed longer runs to be installed faster on the jobsite with no delays to the job schedule because the joints were already made. All the contractor needed to do once the assembly was delivered to the jobsite was to set in place and secure the trench drain run for the pour.

Because the trench drains were made of fiberglass, there was some concern that they could be brittle. To address the concern, a strut channel was used to box the trench drains in, essentially using the channel for support. As a result, everything stayed straight on the ground.

“The only way we could get the job done in such a short timeframe was to do it this way. You can have the prefab work going on for a longer amount of time. While they were building we were prefabbing,” said Sandkohl. At the job’s peak, they had 200 plumbers working.