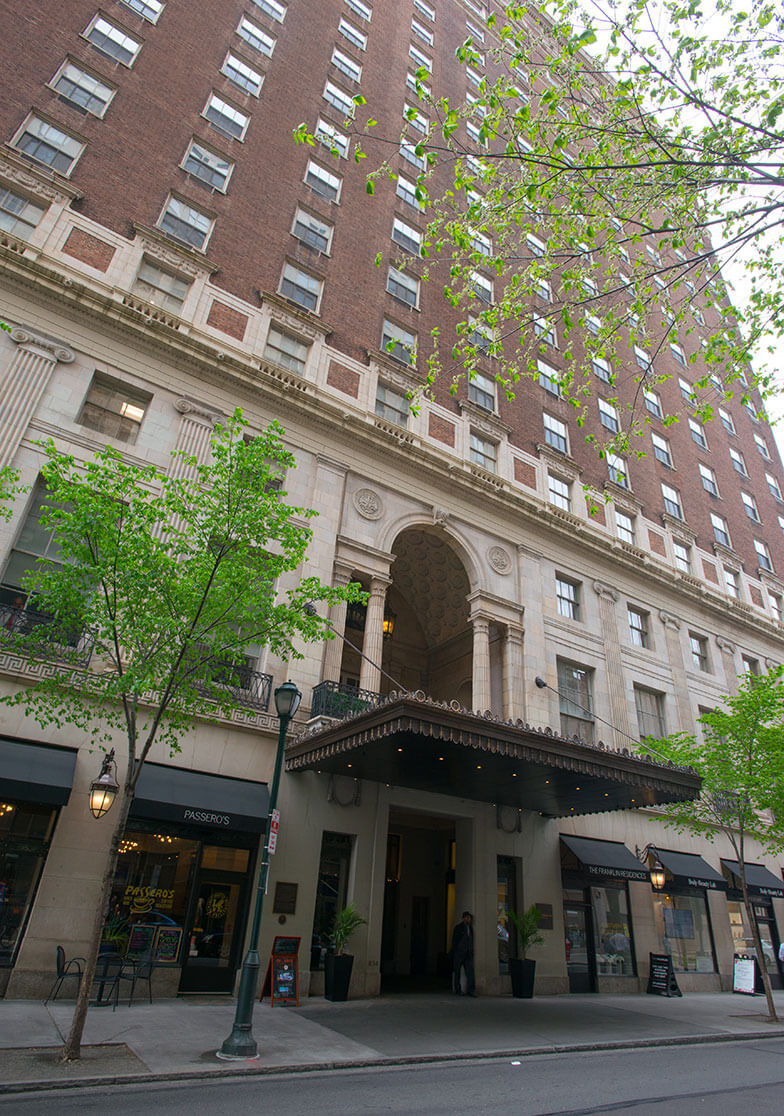 To meet the demands of the luxurious Benjamin Franklin House in Philadelphia, Elliott-Lewis Corporation installed a new, energy-efficient EVAPCO cooling tower with increased cooling capacity in the same space as the previous tower.

Downtown Philadelphia’s Benjamin Franklin House needed an HVAC overhaul but, like most historic buildings, had no room to expand. EVAPCO reached into its archives for the specs of the building’s original cooling tower and created a more powerful, up-to-date version for the same space, making the installation process easier for Elliott-Lewis Corporation.

Time for an Upgrade

The Benjamin Franklin Hotel—now known as The Franklin Residences or, simply, “The Ben”—was built in 1923. Upgrading historic sites typically comes with challenges, such as limited space. The building’s owners recognized that keeping tenants and guests comfortable during increasingly warm and humid summers would take the right systems and equipment working with minimal or no downtime.

A key component of The Ben’s cooling system is the cooling tower that serves a water-sourced heat pump loop in the building. For many years, this loop met most of the building’s cooling needs. Several suites still use packaged terminal air conditioner units, but many tenants have requested the switch to heat pumps. In addition, the retail space expanded from one floor to two. These changes have increased demand on the heat pump loop.

Mike McCauley, sales engineer at Elliott-Lewis Corporation, explained yet another reason for the demand increase. “Some equipment loses efficiency as it gets older. Back when it was built, the system was designed to meet certain demands. Well, those demands have changed. We have warmer summers now, and that’s taxing on older equipment. You can have the best maintenance in the world and [the system] still won’t be as efficient as it once was.”

The increased demand did not come with increased floor space for a second cooling tower or even a new, larger one. The owners were faced with a challenge: how to get more cooling capacity using the same footprint. At the same time, the existing cooling tower, which had served the building since 1984, was reaching the end of its useful life.

“Our company maintains the cooling tower on this site,” said McCauley. “We realized that the equipment was at its end of life and told the owners that if they didn’t replace it soon, they’d be spending lots of money refurbishing it.”

When the original cooling tower was built, it was not subject to certifications or ASHRAE 90.1 requirements, and building codes were different too. The building needed a new cooling
tower that met current requirements—yet had the same footprint and a greater capacity. Engineers were called in to tackle the design, and Elliott-Lewis Corporation, which has served Philadelphia for a century, was chosen to install the new cooling solution.

The original cooling tower was a discontinued EVAPCO unit, a PMTQ cooling tower. So, EVAPCO retrieved the design from their archives and built a new one to meet all the requirements for the project, including a sharply increased cooling demand, while maintaining the same footprint. EVAPCO’s solution increased the system’s cooling capacity on the heat pump loop from about 565 tons to 675 tons, without sacrificing space.

The original galvanized material was replaced by stainless steel, ensuring durability and a long lifespan. The addition of a custom fiber acoustic base for the tower ensured that the new unit was fully up to code.

The new tower also needed to meet or exceed current codes for thermal and acoustic performance. The building sits in a densely populated part of Philadelphia, surrounded by office buildings and residences, so noise is a concern. The new unit features EVAPCO’s super low sound fan instead of the typical centrifugal fan that would be used with a forced draft system.

In addition, the unit has four fans drawing a total of 60 horsepower, up from the original unit’s 40 horsepower. Despite this increase, which achieves a greater capacity, the unit’s performance is more energy-efficient at part loads. Each fan is driven by a variable frequency drive (VFD) designed to run at part loads rather than cycling on and off when the demand changes.

With VFDs, the unit can run all four fans at, for example, 30 percent, which is much more efficient than running one fan at 100 percent. The unit only uses the energy needed at any given load.

The heat exchanger, originally designed to meet the lower demand, would not serve the upgraded cooling tower to provide extra cooling to the building. Rather than replace the heat exchanger, the owners chose to modify the existing piece of equipment. Because there was enough room to add additional plates to increase capacity, the original heat exchanger was cleaned and expanded.

Replacing the old cooling tower with a modernized version allowed for minimal pipework, saving Elliot-Lewis time. “There were some piping changes,” said McCauley. “Old pipe was replaced because of its age, but other than that there was only some rerouting of pipes to accommodate the new tower dimensions.”

Controlling the cooling tower required integration of the unit’s VFD controllers into the building management system. This step proved to be a challenge at first, but since its startup, the unit has been able to meet its required performance with no complaints from the owners. With its sturdy equipment and supportive professionals, The Ben is sure to maintain its reputation for luxury for many years to come.