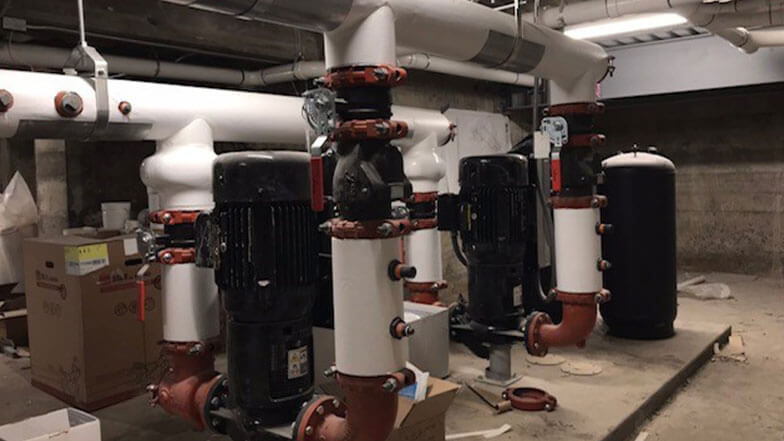 Collaborating with Victaulic’s Virtual Design and Construction team to use BIM to schedule the work resulted in significant time savings, allowing Kruse installers to complete 80 percent of the basement in just a few days.

Victaulic’s building information modeling (BIM) expertise saved Kruse Corporation an estimated $15,000 to $20,000 on the renovation of Union Station in Wichita, KS, while the streamlined construction approach reduced build hours from 4,000 to 3,100, yielding an additional $40,000 in labor savings. The combination of BIM services and Victaulic products simplified coordination,
reduced risks during construction, and cut the manpower needed for this project in half.

Laying the Foundation for Project Downtown

Project Downtown is Wichita’s master plan for developing the city’s urban core to increase the community’s quality of life and encourage regional economic growth. It focuses on key stretches of the downtown area and includes both private and public investment. Union Station, a two-story train depot built in the early 1900s as a central railway station, was repurposed as a commercial office building when the city ended its passenger rail service in 1979. Today, it is central to the city’s ambitious urban renewal project.

In September 2018, Kruse was selected to renovate the hydronic piping system in Union Station. The project schedule was ambitious—even without considering the unknowns of a building more
than a century old and the fact that work would have to take place during the winter holidays. With a move-in date of April 1, 2019, for the new commercial tenants, Kruse was determined to meet the exacting schedule, so they reached out to Victaulic and laid out the requirements and timeline.

Before construction could begin, it was important to understand the workspace. Union Station’s mechanical room was in the unlit basement, which meant there was limited space. The area was only 6′ high, and the contractor knew at the outset there was insufficient space for the hydronic system. Excavation would be necessary before work could begin, so it was critical to understand the layout, potential interference from existing structures, and the proposed placement of the new system components.

Site assessments usually begin with a sketch made from physical measurements, a process that takes a lot of time and can be flawed. Victaulic’s Virtual Design and Construction (VDC) team used a FARO 3D scanner to assess the basement instead. Using the scanner allowed the team to quickly compile measurements of the room and the existing piping network while eliminating the need
to go back to the jobsite for a missing measurement. As the project progressed, the scans streamlined design conversations, because the model and the scan could be overlaid to ensure the designs were aligned with the space. While traditional site assessment methods would have taken two to three days, the digital scan was completed in a single day.

The scan verified that the planned installation matched the room dimensions and confirmed which areas needed to be excavated. The data, made up of more than 40 scans, fed into the BIM software, ensuring the correct dimensions were used. As a result, designers from Victaulic, Kruse, and other trades were aware of any potential interference as components were assembled for the hydronic piping systems.

Using Victaulic Tools for Revit®—a pipe-routing software add-in—the VDC team drew all piping sized 2.5″ and larger and submitted the drawings to Kruse. Once everything was approved, Victaulic began drawing equipment and piping schematics and shared a virtual model with the Kruse design team.

Taking advantage of Navisworks to identify clash detection, designers from both companies began piecing the system together, noting, for example, that previous electrical components posed impediments that would require piping to be routed around them. This information allowed the teams to coordinate workarounds that would permit construction to proceed without interruption,
streamlining the design and avoiding costly and time-consuming rework down the road.

Using Trimble layout software, the teams were able to see where components were placed in relation to one another. The Victaulic model was imported to the Kruse model to ensure system design was coordinated throughout the project. Kruse laid out duct work and hangers based on the piping design developed by Victaulic. Once the designs were confirmed, semi-trailer trucks excavated
47 loads of earth to prepare the space for the hydronic systems.

A nearby Victaulic facility manufactured the pipe spools for installation and shipped them to the jobsite, following the BIM assembly map provided by the design team. Because Kruse knew exactly what was coming and when, they efficiently organized and executed a systematic construction schedule. While work was being done in the Victaulic shop, Kruse was installing hangers in preparation for the pipe spool delivery. Once a spool arrived on the jobsite, it was lifted straight up into the hangers.

With piping systems being installed in a confined space, ventilation was a safety concern. Welded connections would not be feasible because of the open flames and fumes. Kruse decided the most efficient way to meet the schedule would be to use Victaulic’s grooved mechanical joining system, which would allow joints to be connected safely and easily in this space-restricted area.

Using BIM to schedule the work resulted in significant time savings, allowing installers to complete 80 percent of the basement in just a few days. Everything fit as intended, enabling accelerated installation. By using visually inspectable parts, workers could verify proper installation as the system came together, enabling work to proceed safely and delivering a reliable and robust system.

Wichita celebrated the grand re-opening of Union Station on May 16, 2019.