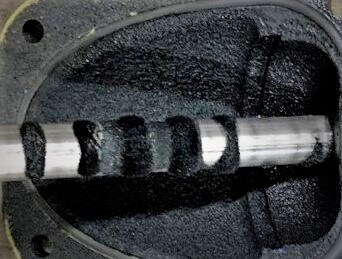 AMS retrofitted existing Y-strainers with Metraflex’s LPD Mag Y-strainer, which has a neodymium magnet that attracts metal particulates before they reach the pumps—an easy solution to the persistent pump failure problem. This photo shows the cover plate before blow down.

Called on to help a Chicago condominium that was having repeated pump failures, AMS Mechanical Systems determined the cause to be metal debris in the pumps. Metraflex Company’s LPD Mag, a high-efficiency, low-pressure-drop Y-strainer with a neodymium magnet, proved to be the perfect solution. AMS found the new, low-cost strainers were easy to install and effectively fixed the problem.

First, the pumps in the residential downtown building began making excessive noise before starting to leak or seizing up. The building had a new, closed-loop system that consisted of 11 individual pumps with electronically commutated motors (ECMs), 11 LPD Y-strainers, and boilers that used copper heat exchangers.

Since the system was put into service in 2017, AMS was brought in to replace 30 pumps with ECMs caused by pump failures within the first two years. Having to replace a pump is no easy or cheap task. “In just one year alone we replaced more than a dozen pumps,” explained John Lueder, client manager at AMS.

Looking at the pumps, it became evident that the powerful magnets in the ECMs were attracting iron oxides and other magnetic particulates into the wet rotor of the pump. The buildup on the rotor either wore through the housing, resulting in a leak, or the pump seized up.

“It is a brand-new system,” said Lueder, “so it was weird when the pumps kept failing.” The source of the iron oxides causing the trouble was the carbon steel pipe. Further analysis determined that the copper heat exchanger was causing galvanic corrosion of the carbon steel pipe, which resulted in additional iron oxides that ultimately found their way into the ECM pump wet rotor and caused failure.

Lueder consulted with Dan Watkins, vice president of Bornquist, the local manufacturer’s representative for Metraflex, who also assisted in the initial design of the system. Watkins is very familiar with the LPD Mag Y-strainer from Metraflex and knew it would be the perfect solution.

According to Watkins, “Almost every single pump failure was due to excessive debris; the iron oxides were definitely causing issues.”

Because this system already had 11 standard LPD Y-strainers supplied by Metraflex, the solution seemed simple: the LPD Mag Retrofit Kit. With the kit, the contractor simply removes and

replaces the standard LPD cover plate with the retrofit cover plate that includes a dry well for the powerful neodymium magnet.

“It was like a no-brainer,” Lueder said. “We felt better about trying something with minimal effort and a low price point after we have spent thousands replacing failed pumps. The installation was easy, and there was no drawback to using them.”

Dave Smolen, service technician with AMS, had the same opinion. “The kit was simple to install and intriguing. I was willing to do anything to help me in not having to replace these pumps so often.”

Smolen continued, “These LPD Mag cover plates have been installed for nine months now, and I have had no troubles with the ECM pumps.”

The next step was to blow down the LPD Mag strainers to clean out any debris or iron oxides. The LPD Mags were blown down in accordance with the instructions provided with the product. The pumps were on and pressurized and 150° F, at 25 psi. The magnet was pulled halfway out, the valve was opened, then the remaining length of magnet was pulled out. This process pulls the metallic particles down into the blow-off port, allowing for a clean blowout.

One of the unique advantages of the LPD Mag strainers is that you can blow them down with the pumps running, as well as with the system shut down. Lueder explained, “The blow-down process went well. We needed to be more prepared and ready for the rush of water, but the magnet held the particulate really well. The instructions made sense, and it worked to remove the metal particulate in the line.”

When blown down, the first strainer released a large cloud of black sediment followed by relatively clear water. For the second strainer, the system was shut down and the cover plate was removed completely to get a sense of what was being attracted to the magnet.

After seeing the large accumulation of sludge and iron oxide that the magnet had attracted, it was time to reinstall the cover plate and blow down the second strainer. The system remained on and the engineers held a large bucket to capture debris from the blow down.

The third strainer to be blown down was installed at a higher elevation and required a hose to direct the water into a container. After hooking up the hose to the blow-down valve, the blow-down process was the same as for the other strainers.

The LPD Mag works around the clock. Using the formula for exponential decay and knowing the volume of water circulating, users can predict when 95 percent of the magnetic particles will be captured.

Since the installation of the LPD Mag Retrofit Kits, there have been no more pump issues. “We did not find any additional pumps with an issue related to that. So, so far so good!” said Lueder, three months after the first blow down. Nearly a year after installation, it is evident that the new LPD Mag Y-strainers with neodymium magnets have brought the mechanical room a (silent) sigh of relief.