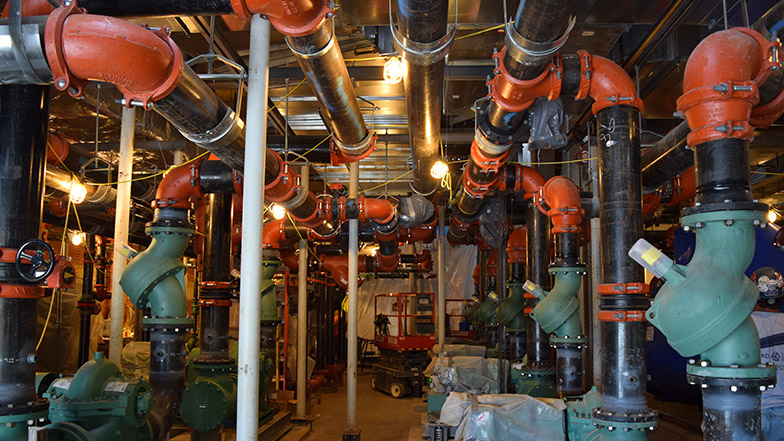 By prefabricating 90 percent of its piping and using Victaulic’s grooved couplings, Arden was able to install the entire mechanical room for a massive renovation in less than two months.

Contracted to design and install the mechanical, electrical, plumbing, and fire protection systems for a massive renovation, Arden Building Companies faced a tight timeline, a tight space, and a tight budget—all of which made welding a poor choice for completing the mechanical room. Using Victaulic’s easy-to-install grooved connections, Arden joined, hung, and installed pipe quickly and efficiently once it was lowered into the mechanical room. Arden estimated that the speed of installation reduced overall costs by approximately $100,000.

Built in 1912, the two-story, 58,000-square-foot South Street Landing Power Station in Providence, RI, provided electricity to jewelry, textile, and machinery manufacturing firms through the early 20th century. The historic power station, decommissioned in the 1990s, has since been transformed into an impressive seven-story, 265,000-square-foot, state-of-the-art nursing education and administrative office complex, which opened in April 2017. It is now home to the Rhode Island Nursing Education Center and Brown University.

John Puniello, vice president of Arden, recalled the difficulties his team came across—specifically with the top-floor mechanical room. “Not only did Arden have just six weeks to complete the large mechanical room, but the space was tight, making maneuverability and installation difficult, and, since the mechanical room was saved for last, it required each section of pipe be installed in a specific order,” he said.

After closely analyzing the timeline, the budget, and the scope of work ahead of them, the Arden team quickly realized that welding the condenser and chilled-water piping would take too long and had the potential to drive the project over budget. So, they called Victaulic. Having used Victaulic on previous projects, Arden saw firsthand how Victaulic’s innovative piping technologies reduced installation times and increased efficiencies without sacrificing safety or reliability.

According to Puniello, the Arden/Victaulic partnership led to an “erector set” approach. Arden designed and prefabricated 90 percent of the piping systems at its facility, relying on Victaulic’s grooved connections for installation onsite.

The entire mechanical room was delivered to the jobsite, and the installation went directly from the truck to the hanger. Arden designed and prefabricated nearly all of the systems in-house, using their 33,000-square-foot facility, located just seven miles from downtown Providence. Once onsite, they used a crane to lift each piece of equipment into the mechanical room through a large hole in the roof.

Overall, it took less than two months to put the entire mechanical room together once the pieces were prepped and delivered onsite—an unachievable feat with a welded solution.

“Given the nature of the project, I knew the condenser and chilled piping job was well-suited for the Victaulic portfolio,” said Don Forsythe, Arden’s senior foreman. “Their solutions provide ease of installation and time savings, which was just what we needed to complete the job.”

“Their grooved solutions, couplings, and valves enabled us to work quickly and efficiently, exceeding our expectations and saving us money.”

“Victaulic’s products were a huge complement to our own prefabrication capabilities,” explained Puniello. “With a project of this size and on such a compressed schedule, our partnership provided us the needed resources and solutions to get the job done on time.”

“Their grooved solutions, couplings, and valves enabled us to work quickly and efficiently, exceeding our expectations and saving us money,” said Forsythe. “The condenser and chilled water systems have been tested and are running nicely.”