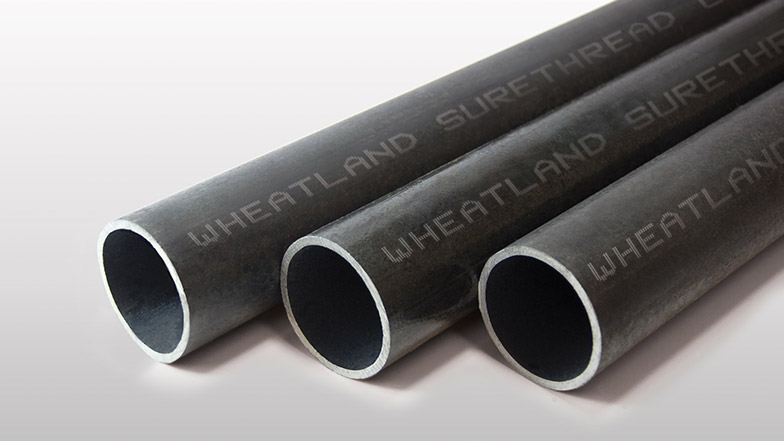 In 2015, Atomatic Mechanical Services won the bid to install a large chiller plant in a renovated office building in Chicago’s West Loop and chose Wheatland Tube pipe for nearly every part of the project. Atomatic knew that reliable, high-quality, domestic pipe is easier to weld then imported pipe and much less likely to deteriorate or cause leaks—so it would save Atomatic time both onsite and after installation. As expected, the system has had no leaks, which helped allow the chiller plant to become operational two weeks ahead of schedule.

The loft-style high-rise building, now known as the Gogo Building, is home to high-profile tenants such as Gogo, Twitter, and Uber. Atomatic used a total of 1,600 tons of Wheatland Tube cooling pipe in sizes ranging from 1/2” to 16”. The crew set up a pipe fabrication station onsite for cutting, threading, and welding and made more than 200 screwed joints. With eight pipefitters working six days a week, plus overtime, they completed the project in just five months.

Atomatic’s focus on total quality has always been the key to its success and steady growth. While other HVAC providers try to cut costs by using imported pipe, Atomatic remains loyal to high-quality domestic pipe from Wheatland Tube. “We’re growing because we put quality first and always use the best pipe,” said Nick LaMonto, construction manager at Atomatic. “That’s how we’re different from our competition. And I think our customers respect that. We do it right the first time, so they don’t need to call us back to fix leaks. They call us back for more new projects.”

“So we might spend a little more on materials by buying Wheatland pipe, but we make up the difference in labor savings during installation. It’s more than worth it.”

LaMonto has seen a lot of pipe since he entered the industry nearly 30 years ago. He has seen the welding process cause inferior pipe to split along the seam and develop leaks. He has seen imported pipe deteriorate over the span of a year when exposed to the elements. And he has seen a substantial difference in quality when using pipe from Wheatland Tube, especially when welding, threading, or cutting Wheatland’s SureThread™ continuous weld standard steel pipe.

“Import pipe acts funny sometimes when you weld and thread it, because the steel can be inconsistent,” LaMonto said. “But SureThread is made of quality steel, so it doesn’t have any hard and soft spots. It’s annealed during the manufacturing process, which makes it much easier to work with.”

LaMonto never gives quotes involving any other pipe, and he works with a supply house that keeps Wheatland Tube’s product well stocked. Occasionally, though, the supplier runs out, and Atomatic has to use imported pipe to meet a deadline. Such a situation happened recently, when Atomatic needed to install gas piping on a roof. Workers tried to use the imported pipe that the supplier provided but had such a hard time with the threading that they gave up and replaced all the pipe with product from Wheatland Tube when it was back in stock. Atomatic finished the job easily and knew the pipe would perform well for their customer.

By using Wheatland Tube pipes, “we do it right the first time, so they don’t need to call us back to fix leaks. They call us back for more new projects.”

Because the team at Atomatic understands the quality difference between Wheatland pipe and imported pipe, they also understand the cost difference. Imported pipe is cheaper upfront but costs more in labor when workers have to recut inferior pipes, rethread or clean up uneven pipe ends, and fix leaks.

“We obviously want to be competitive and make a profit on every job, but we don’t want to use inferior product. Leaks are embarrassing and a pain to repair,” LaMonto said. “So we might spend a little more on materials by buying Wheatland pipe, but we make up the difference in labor savings during installation. It’s more than worth it.”