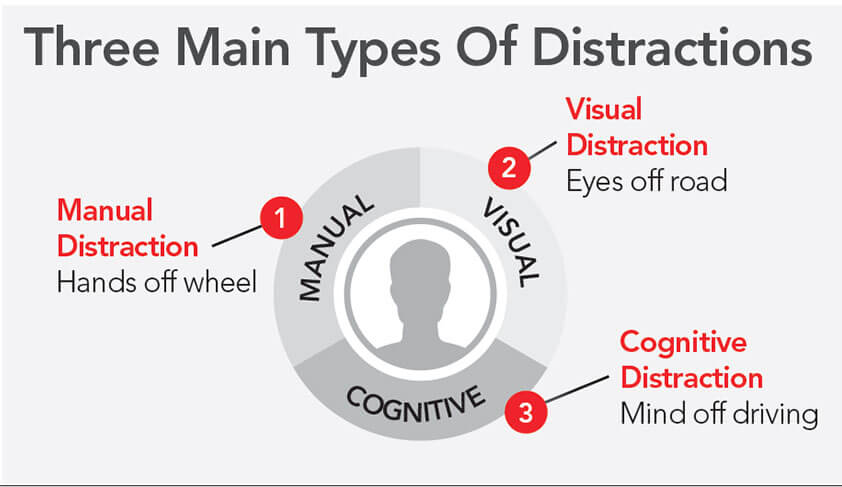 According to the NSC, an estimated 25 percent of crashes involve cell phones (conversations and text messaging).

Distracted driving poses significant risk to every business that has employees who drive both company-owned and personal vehicles for company business. Common activities that divert attention from the road include texting, most mobile phone use, eating and drinking, reaching for an object, talking with a passenger, and reading navigation systems. According to the National Safety Council (NSC), for the second consecutive year, more than 40,000 people died in motor vehicle crashes in 2017. According to a 2017 NSC public opinion poll, 74 percent rated distracted drivers as a major concern for traffic safety.

Use this guide to assist in developing and supporting a program that helps in the control of driver behaviors, based on statistics about the impact of cell phone use and driver distractions, such as talking and texting. (Go to the NSC’s website to download a poster explaining the risks of distracted driving: Hands-Free Is Not Risk-Free.)

What Is Distracted Driving?

Any activity that could divert a person’s attention away from the primary task of driving is considered distracted driving. All distractions endanger driver, passenger, and bystander safety. According to the NSC, distractions now join alcohol and speeding as leading factors in crashes that cause fatal and serious injuries.

Texting is a distraction that requires all three types of attention—manual, visual, and cognitive. Studies show that using voice-to-text is more distracting than manually composing texts. The NSC estimates a minimum of 341,000 vehicle crashes involved the driver text messaging. According to NHTSA, five seconds is the average time your eyes are off the road while texting. At 55 mph, that is enough time to cover the entire length of a football field.

A common misconception about talking on the phone while driving is that use of a hands-free device is a safe alternative to holding a phone to your ear. In 2013 NSC estimated 21 percent of crashes, or 1.2 million crashes, involved talking on handheld and hands-free cell phones.

Under the doctrine of vicarious liability, employers may be held legally accountable for the negligent acts of employees committed during the course of their employment. Employers may also be
found negligent if they fail to put a policy in place for the safe use of cell phones. According to the Network of Employers for Traffic Safety, motor vehicle crashes at work cost employers an estimated:

(Learn more about the costs of motor vehicle crashes to employers.)

More than 80 percent of the nation’s 94 million cell phone owners use them while driving—at least sometimes. Many states have legislation to regulate cell phone use and texting while driving. At least 13 nations, including England, Germany, and Japan, have banned the use of cell phones when driving a vehicle. Check state laws regularly, as legislation may have recently changed.

In the past few years, cell phone usage has been an issue in several lawsuits, and employers are being held responsible if a worker causes an accident while talking on the phone. So why are employers concerned about cell phones? Cell phone records can be subpoenaed to prove the employee was on the phone when the accident occurred. Other distractions cannot be identified
to a specific time, and many drivers do not want to say they were distracted and not driving safely.

While there is no guaranteed defense to liability, developing appropriate policies, training, and enforcement mechanisms can help limit potential liability and increase public safety. Several companies are deciding on a total ban to prohibit employees from using cell phones while driving company or personal vehicles for work. With over 150,000 employees, Cargill is the largest privately held corporation to implement such a strict policy. According to the NSC, 1 percent of companies believe that productivity declined as a result of implementing a total ban. In contrast, other companies adopt cell phone safety guidelines and focus on training and enforcement. Each company should determine whether the benefits of employee cell phone use outweigh the risk. Many companies are opting for a total ban on cell phone use unless absolutely necessary.

All workers are at risk of crashes, whether they drive light or heavy vehicles or whether driving is a main or incidental job duty. To protect themselves, employers should consider establishing a written policy restricting any use of a cell phone and ensure employees read and sign the written policy. The restriction should include the use of hands-free headsets, because studies indicate it is the conversation, not the physical act of holding the phone, that contributes to accidents.

To learn more about how CNA can help your company maintain business income while reducing commercial auto exposures, visit www.cna.com/driverperformance.