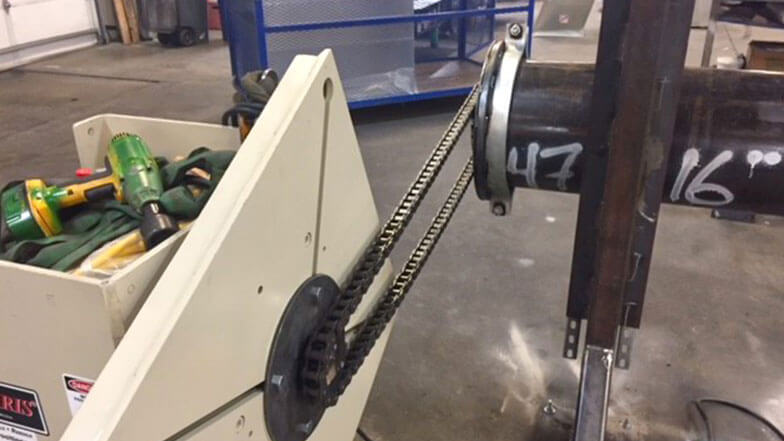 Faced with a tight working space, Hermanson Company took advantage of Miller Electric’s new XMT® 350 FieldPro System welder along with a custom-built pipe turner so the mechanical contractor could make hundreds of high-quality welds in a fraction of the time that hand-turning would have required. The innovative approach not only increased productivity but also contributed to a safer, healthier work environment.

In 2017, the Port of Seattle broke ground on the North Satellite Modernization Project at Seattle-Tacoma International Airport. The project involved expansion and renovation of a 45-year-old facility to enhance the passenger traveling experience. As part of the mechanical upgrades, Hermanson Company, a mechanical and plumbing contractor located south of Seattle, was awarded a contract to install 3,400 lineal feet of 16” welded steel chilled water piping in an existing utility tunnel located under the main terminal leading to the North Satellite.

The tunnel measured only 7′ high by 6′ wide and was already fitted with multiple building infrastructure services, including existing chiller piping and electrical conduit. Available space to route new piping was at a premium, and existing infrastructure had to be removed from service and demolished to complete the upgrade. Hermanson shop foremen, engineers, and field techs began working out the most efficient methods of phasing, fabricating, transporting, installing, and joining to successfully and safely install infrastructure chilled water piping in such a constricted space.

Paul McLain, Hermanson’s pipe shop foreman (who has more than two decades of industry experience, including 17 years as a welding instructor for United Association of Plumbers & Pipefitters (UA) Local 32 and an American Welding Society inspector), developed a fabrication plan. “Based on past experience working in tight spaces, I knew that rotating the pipe in place was the best way to achieve the highest performing, quality welds,” recalled McLain. “We had just never done it on this scale before.”

Employing pipe turners when fabricating pipe assemblies is standard practice for Hermanson Company welders. Rotating the pipe allows for use of pulse spray or regulated metal deposition (RMD) welds rather than stick welding and creates a better deposition rate. Welds on rounded surfaces like pipe can create “weld puddle”—the result of gravity pulling on the weld material. Additionally, pulse spray welds reduce weld smoke, which is an important health consideration when working in constricted spaces. Overall, rotating pipe as it is welded is much easier on the welder and provides a more consistent, better quality weld.

McLain knew a pipe turner was the answer and consulted with Hermanson engineering staff to calculate the torque value needed to rotate a series of 13′ pieces of 16” standard-weight pipe at lengths up to 200′ long. Once the values were determined, McLain worked with a fixed welding automation fabricator to build a pipe turner that could handle cumulative weights up to 12,500 pounds while welding. The pipe turner consisted of a motor, sprockets, a variable speed foot peddle, and a heavy gauge chain that attached to a sprocket bolted to the end pipe section. “Think of a bicycle assembly—just on a massive scale,” said McLain.

Once the pipe turner was fabricated, it was shipped to Hermanson’s pipe shop in Kent, WA, where McLain began simulated field testing. Working with project-specified materials, tests allowed welders to simulate the same wire-feed welding process currently used in the Hermanson shop. Amperage tests were also completed, and it was determined that the pipe turner was only running at two thirds of its maximum capacity, thereby ensuring adequate amperage for the field operation.

Meanwhile, at the jobsite, preparations were being made to stage the chilled water pipe in the utility tunnel for installation. An access point was cut into the tunnel from the ground level of the North Satellite, the existing piping was removed, and a crane was set to lower hundreds of 13′ pieces of pipe onto custom-built rolling carts. The pipe sections were then positioned in the tunnel, where workers reloaded them onto carts and moved them into place. Electricians installed three-phase, 110-volt power every 100′ along the tunnel for lights, tools, and welding equipment. Traditional welding wire feeders would have been too large for the space, but Miller Electric’s new XMT 350 FieldPro System welder was a good fit. Measuring just 24” x 11” x 17“, the FieldPro and its power supply took up less than half the space of traditional welders and was positioned on a cart for easy mobility.

Once all the pipe was in place, a team of three welders and pipefitters began the process of making over 340 welds to connect the stacked supply and return chilled water piping in the tunnel. In addition to creating a superior weld, the pipe turner saved the crew valuable time that would have otherwise been spent hand-turning the pipe with a series of chains and come-alongs. The simple and effective approach achieved with the pipe turner allowed the project team to accurately forecast labor and meet schedule deadlines with no recordable injuries.

Editor’s Note: Sadly, just prior to publication, Paul McLain, 43, passed away. Paul’s take-charge and lead-by-example management style will be sorely missed by his fellow Local 32 union members, his two sons, and friends and coworkers at Hermanson Company, where he worked and innovated for more than eight years.