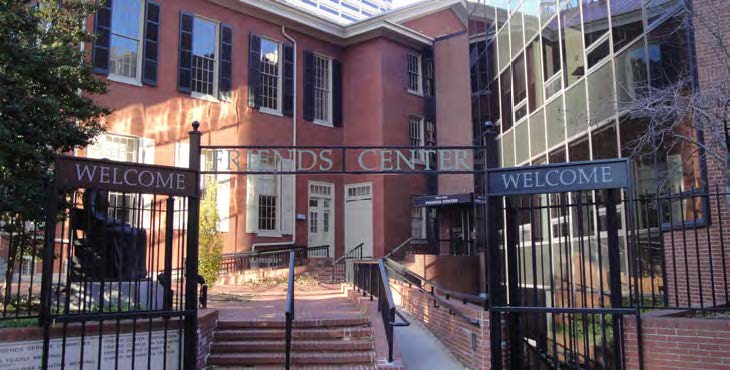 By opting for Carrier’s geothermal exchange system, Elliot-Lewis helped The Friends Center in central Philadelphia upgrade its heating and cooling plant and earn LEED® Platinum certification, despite the challenges posed by an urban location and national landmark status. The Friends Center campus in central Philadelphia is owned and operated by The Religious Society of Friends, commonly known as the Quakers.

Friends of the Earth

Faced with the need to renovate the heating and cooling plant, the Friends decided to take this opportunity to eliminate their reliance on fossil fuels and secure the future comfort of worshippers, office inhabitants, and the children and staff of the onsite daycare center using 100-percent renewable energy. Environmental integrity, responsible use of resources, and the goal of carbon neutrality were driving forces in the Friends’ decision-making process. In addition, their design solution had to take into account the campus’s location in center-city Philadelphia.

The centerpiece of the $12.5 million Friends Center renovation is a Carrier geothermal exchange system designed to eliminate the property’s reliance on fossil fuels for heating and cooling. Using deep wells installed directly below the Friends Center campus, the new system—which includes Carrier geothermal heat pumps, air handlers, air terminals, fan coil units, hot water coils, and digital controls—enabled the Friends to use geothermal technology despite their metropolitan location, in which the extensive surface water-loop of a typical geothermal system would have been impossible. In addition, the i-Vu® open protocol web-based building automation system was specified, enabling Friends Center staff to monitor and control every aspect of the geothermal system as well as other building functions.

The Friends Center campus includes three buildings: the Race Street Meetinghouse, a national historic landmark built in 1856, and two modern facilities that house office and conference space. The 54,000-square-foot facility is home to 19 nonprofit organizations and a daycare center. It is used by about 300 employees and 75 children each day, plus the congregation of the Central Philadelphia Monthly Meeting. In addition to the goals of eliminating the Center’s dependence on nonrenewable resources and cutting greenhouse gas emissions to zero, the integrity of the Meetinghouse had to be preserved.

Geothermal technology was identified as the key to the Friends Center’s sustainable future. A traditional geothermal system would have required a well field larger than possible in the middle of Philadelphia. Instead, six deep wells—the first in Pennsylvania—were drilled for the Center’s system. Each well is six inches in diameter and more than 1,500 feet deep. Water from the wells is used to supply the geothermal heat pumps, which provide heating and air conditioning for the Center. Carrier geothermal equipment was chosen to transform the latent energy of the well water into comfort for the inhabitants of the Center.

Jonathan Salemo, project manager for Elliott-Lewis, said, “We chose Carrier because they provided heat pumps and controls that met our requirements in terms of efficiency, capacity, features, and cost. I was very impressed with the operation of the Carrier water-to-water heat pumps and with their ability to operate as both a chiller and a boiler, allowing the system to provide simultaneous heating and cooling.” This ability enables Friends Center staff to manage the comfort of the highly diverse areas of the facility using one integrated system that draws solely on renewable energy.

To avoid wastefully replacing equipment that was still in good working order, the new system was integrated into some existing components. The facility could not use ductwork, so individual water-to-air geothermal heat pumps were used to provide efficient space comfort. In the two newer buildings, Carrier’s Aquazone 50PSW water-to-water heat pumps replaced the existing chiller and city steam system. The existing air handler was improved with a variable speed drive, which increases efficiency and extends equipment life, while the air system was upgraded to variable air volume, another efficiency improvement. Finally, fan coil units were deployed in perimeter spaces to offset heating loads.

Robert Pry, senior controls engineer for Carrier, said, “One of the most significant challenges of the controls design at The Friends Center was the integration of water, air, and ancillary systems. The equipment was connected via the open protocol i-Vu system, which allows staff to observe and control the operation of the HVAC and rainwater collection systems.”

In the end, the careful process of renovating The Friends Center paid off. The Center eliminated its fossil fuel emissions of 326 tons per year and is now positioned for a sustainable future in its center-city location. The Center was rewarded with LEED Platinum certification, indicating that the Friends have obtained their goal of responsible comfort and good stewardship of resources.