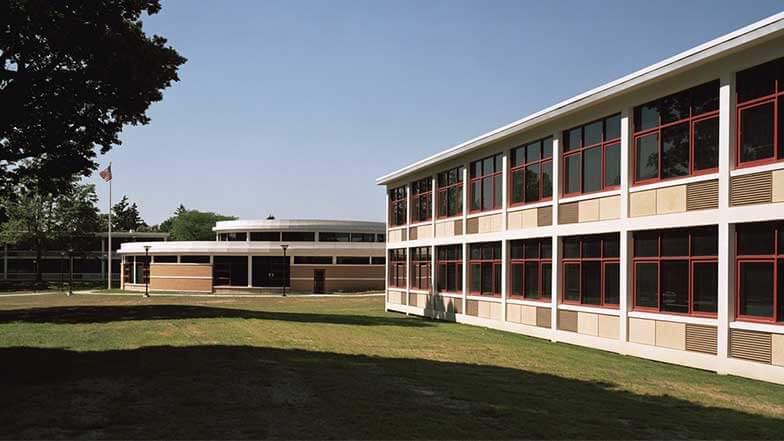 Built in the 1950s, White Plains High School in New York has stood the test of time, so when an HVAC upgrade was needed, school administrators wanted to keep it simple—and minimize cost and downtime. They selected Daikin Applied variable refrigerant volume (VRV) solutions to replace their aging systems with new, more efficient ones that fit the bill. Now, the school not only has a comfortable climate but also a more energy-efficient, quieter, and healthier classroom environment.

White Plains High School’s B-Wing is one of two original structures on campus and leverages the common architectural design methods of the era in which it was built. Exterior structural beams have ensured the integrity of the 12,000-square-foot building over time. However, the original design posed some challenges when it came to updating the HVAC system.

School administrators knew they wanted a like-for-like replacement of the current unit ventilators (UVs) to minimize downtime, avoid the added expense associated with designing a new solution, and continue using the existing hot water system. In designing the replacement system, it was recognized that the exterior structural beams were blocking the free-air space for the new, more efficient compressorized UV design, which required higher condenser airflow than the older UV models.

To eliminate the need for condenser airflow, the school installed Daikin Applied UVs, which come with factory-installed electronic expansion valves (EEVs) and use remote Daikin VRV IV heat pump condensing units. These UVs can bring up to 100-percent outside air directly into the classroom, and without the need for condenser airflow, the existing louver opening was sufficient.

The VRV condensers were placed outside on ground level, where there is ample space and airflow to reject heat in cooling mode. The UVs were also able to use the existing hot water heating system during the cold New York winters. The UVs were ideal for the school because they allow for individual control of heating and cooling and direct integration of fresh air into the classroom.

The design included demand control ventilation, a feature which increased operating efficiency for the school and translates into dollars saved for the district. EEVs in the system modulate the precise amount of refrigerant to each zone, meeting the requested set point in a gradual and efficient manner. The demand control ventilation feature continuously monitors carbon dioxide levels in the classrooms and brings in fresh air accordingly, optimizing the volume of outside air supplied to the space and reducing energy waste.

The single air filter in each unit removes particulate from outside air before it is conditioned and supplied to the classrooms. The filter is easy to access and replace, easing the burden on facilities staff.

VRV condensers come with a corrosion-resistant coating, test-rated for 1,000 hours of salt spray, which makes the equipment suitable for harsh weather and coastal areas such as White Plains, NY. The hydrophilic coating also washes away dirt after rainfall, further extending the life of the system.

White Plains’ Director of Facilities, Frank Stefanelli, was pleased with the solution Daikin provided, adding that the students are the ones who are most thrilled. Before the upgrade, “We got many calls from students and teachers saying that the classrooms were too warm,” said Stefanelli.

“When I went to walk the B-Wing you could see the kids were sweating,” he continued. “Even in the winter, the rooms would get too warm from the lack of temperature control. It pained me to see the windows open on my way home from work.” This winter however, the windows have been closed, and students are thankful for the enhanced comfort delivered by Daikin.

For more information, visit www.daikinapplied.com. MCAA thanks the Daikin Group for being a benefactor of MCAA19 and supplying beverages on Tuesday evening.