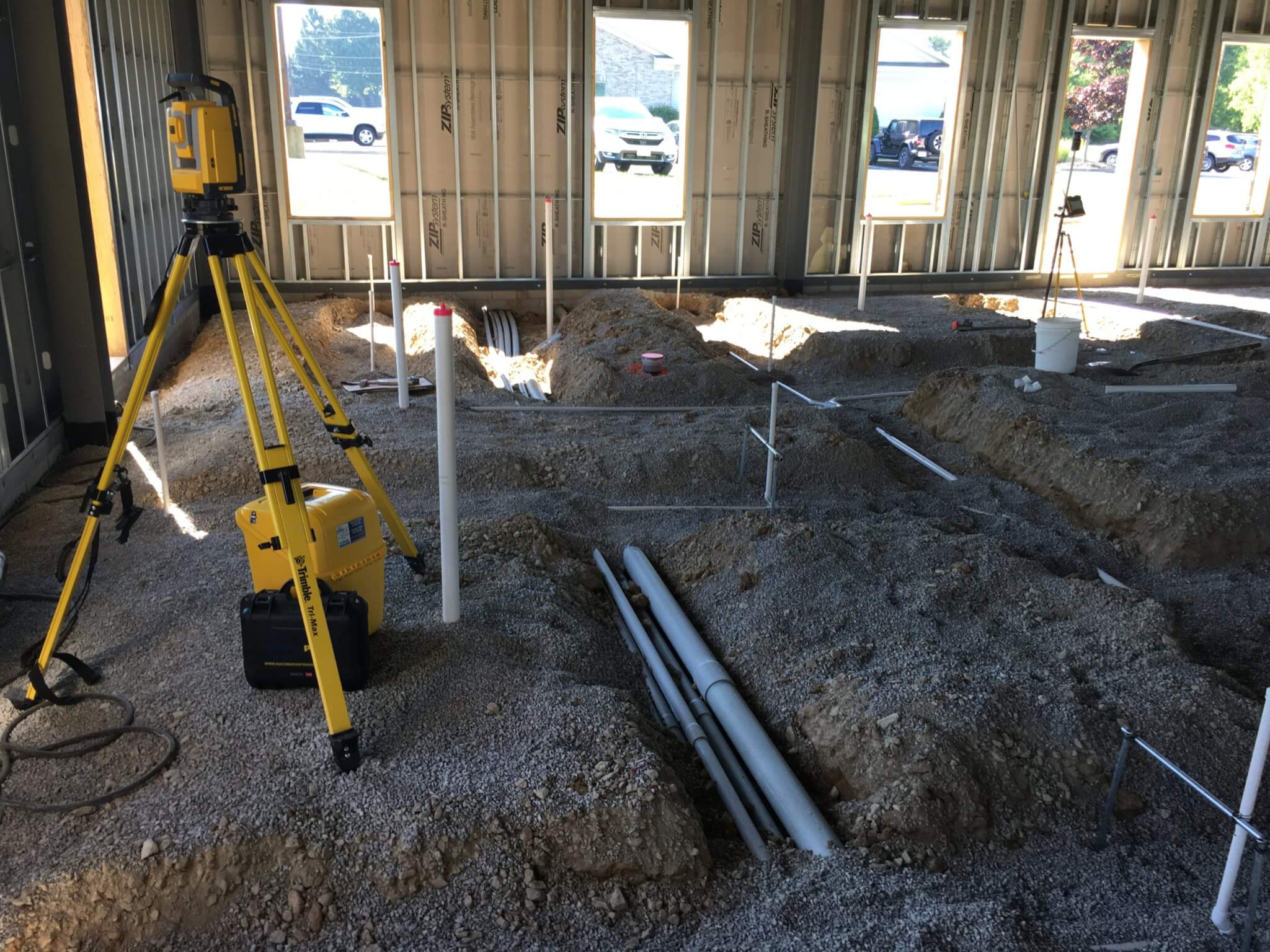 The reliability of the Trimble X7 Scanner and the information it provides have transformed Warner Mechanical’s approach to installing underground piping.

Moving Away From Manual

Historically, when Warner Mechanical was working on a prefabrication project, the team would go out to the field with a tape measure and measure the area, take as many notes as possible, and bring the information back to the office. Often, they would then think of other measurements they needed or wanted and would either go back and do more measuring or hope that the prefabrication would work with the existing measurements. If they were not working on a prefabrication project, they would do all of the measuring and fitting in the field.

Doug Riddell, BIM/CAD coordinator at Warner Mechanical, had been doing 3D modeling for two years and was pushing the envelope from a technology perspective. One of the hurdles he faced during prefabrication was that although the 3D model was a great tool, accuracy could vary by about two inches—which is two inches too much when it comes to tight tolerances for prefabricated piping that need to hit a precise point on a coil or boiler connection. Further, the variance can increase by another two inches based on the type of building or where the equipment is installed in the building. So, when all variances are factored in, prefabrication measurements could be up to four inches off on prefabrication.

Warner Mechanical wanted to implement a system that would improve the company’s prefabrication process and get its team up to speed on the latest technology. “The biggest reason we were interested in investing in a scanner was that we wanted to be able to scan the mechanical room on a new construction site once the equipment is installed and set,” said Kevin Phillips, senior project manager of Warner Mechanical. “The goal is to bring that information back into the model to see where the deviations are so we can dial in the accuracy before we prefabricate from the 3D model.” In addition, the company was looking for a way to increase efficiency and save time.

Working with Building Point Ohio Valley, a Trimble reseller, Warner Mechanical purchased a Trimble X7 3D laser scanner powered by Trimble FieldLink software because of its advanced features and lower price point. By preparing their Revit model with Trimble SysQue and then exporting the data to Trimble FieldLink, Warner Mechanical can use one software application to capture and register scan data, align it with the 3D model of the project, and visualize the scan data, model, and field layout points on a tablet controller without leaving the project site. This workflow enables the team to be efficient with their time while on the job and avoid additional processing time back in the office.

One of Riddell’s favorite features of the X7 scanner is the Trimble Registration Assist for in-field registration that allows for automatic scan orientation and alignment with the last preselected scan. He also likes the ability to customize the scanner to allow for faster scans and the ability to view both scans and 3D models on the tablet controller for onsite viewing.

Once the mechanical equipment is installed in a building or facility, Warner Mechanical can go to a site and use the scanner to capture an area and easily compare the scan data measurements with the 3D model on a tablet controller to see whether there are any deviations between the scan and the model.

“The Trimble X7 scanner allows us to control our working atmosphere for prefabrication while also removing the added variables of a busy construction work area. The scanner also gives us exact information, which greatly diminishes the labor burden,” said Riddell. “It is efficient, user-friendly, and informative.”

Warner Mechanical describes its experience with the scanner as invaluable because of the amount of information gained, which has helped alleviate issues even as they were just getting started with the technology. “The X7 scanner has touched several different areas of our business and improved our operations considerably in just the short time we have had it,” said Riddell.

On a recent project involving the mechanical room for a local elementary school, the Warner Mechanical team used the scanner to visualize the room and see it from different angles to pinpoint the exact systems. After installing the new systems, they were able to go back in and scan everything so they had both the original 3D model and the final installation scan file to overlay. They discovered an issue with the doors of an air handler hitting pipe when opened, and the clearance was accounted for in the modeling. They wanted to find out whether the manufacturer’s model was accurate and also whether their field workers put the pipe in the proper place. Using FieldLink allowed them to see exactly where the equipment was set in the model and compare it with what was actually installed in the field.

The speed and accuracy of the scanner is helping Warner Mechanical save time and labor resources. Further, they are increasing safety for their team by using the scanner to facilitate preconstruction efforts. Because the most dangerous spot on the construction site is the actual field, doing preconstruction in a controlled environment with pinpoint accuracy from the scans eliminates some risk.

Another unexpected benefit was that general contractors now know Warner Mechanical has a 3D scanner, which allows the company to play a major role in creating 3D models for other contractors. This capacity gives them an edge in doing the mechanical portion of projects and enables them to generate additional revenue streams.

The X7 scanner has helped further Warner Mechanical’s mission to embrace technology and facilitate collaboration between the office and the field. “We utilize scans for accurate prefabrication and layout and can also use the real-time viewing feature to quickly show scans to project managers,” said Riddell. “The future looks to be incredibly exciting as we learn more about the scanner, and we are excited to apply this technology on many more jobs to come.”

MCAA thanks Trimble for being a sponsor of MCAA’s 2021 Virtual Education Conference.