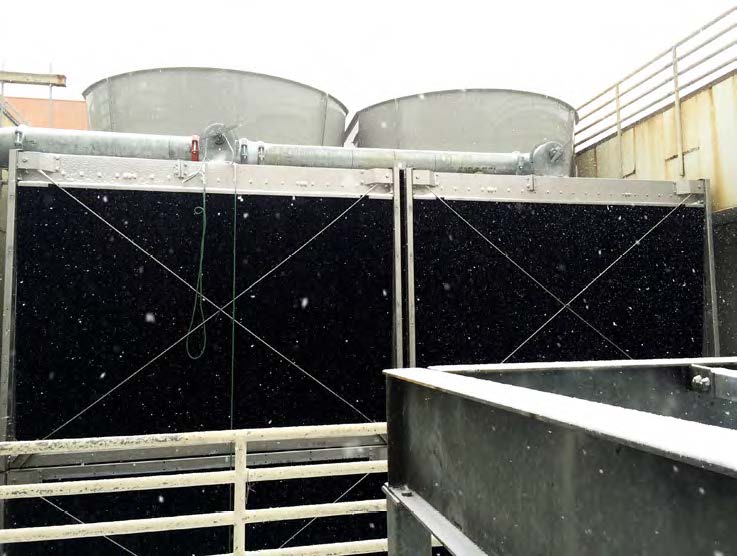 The project took place at Boston University’s medical campus, in an early 1990s, 10-story university laboratory research building that uses 100-percent outside air. Because of tight clearances of mere inches on all sides that made replacing the three towers incredibly difficult, EMCOR needed an option that fit the space. The location would not allow room for ladders or fan deck extensions.

Replacing older cooling towers can be challenging because of differences in footprints, other dimensions, and product options. Because the two Marley NC towers chosen were close to the same size as the three aging towers, making them fit was a tall order. The project team measured multiple times to make sure they got it right. Nonetheless, everyone on the team agreed that performance was a much more critical concern than any space-related struggles that would come with their tower choice.

As it turned out, the weight of the chillers proved to be even more difficult than the fit. Complicating things further, the installation needed to be completed during the college intersession between Christmas and the new year.

The two Marley NC Cooling Towers installed on top of the building in late December of 2014 required special modifications to make them fit in such a tight space. The towers had to have handrails on all four faces and ladder openings on one side only.

The team worked out a smart rigging plan, dropped in the cooling tower modules, and slid them into position. The installation required a 600-ton crane to place the chillers and cooling towers during the oneweek installation period. The roads were required to be closed, which minimized disruption, and good weather helped—the temperature remained around 40° F with no snow in Boston during that week.

Traditionally, the university’s maintenance staff would winterize their cooling towers by shutting them off and draining them, so from approximately mid-September through mid-March, there was no cooling available. Therefore, on the occasional higher temperature days in October or March, the temperature inside the building could rise by more than 10° F above ideal conditions.

The project team developed a new scheme. In winter, the tower would run water through the cooling coils and to the heat exchanger—in essence, the load that was on the process tower would be cooled by recovering heat from it and using it to preheat the 100-percent outdoor air required for the building. In doing so, the team was able to recover heat from the process cooling loop, which also had the side benefit of circulating water to eliminate potential cold spots in the cooling coils. Not only would this approach make the towers more efficient, but also the towers would last longer by avoiding some of the issues that had taxed the original equipment.

Turning Down the Noise

Another issue that proved to be a concern was tower noise—specifically, the transfer of vibrations. Because of the sensitivity of the floor directly below, the existing installation used springs. But as the project team examined the springs, they found them ineffective.

Although it was thought that the new cooling tower would perform satisfactorily without springs, the team decided to provide the same level of isolation design for the new towers as in the original installation. Piping was optimized for better water flow, and the entire structure was reworked. Additionally, new grillage provided needed structural support. With a better support structure and new steel, the client got a quieter option that was better than new.

By combining high-performing cooling towers with the ingenuity of a talented project team, an effective solution was reached—one that will last for a long time. The new cooling system has been operating since March 2015 and is performing up to expectations.

A project of this scope with this many challenges could have been incredibly difficult with disappointing outcomes. But with proper planning and clever solutions by the EMCOR team, along with the powerful capabilities and configuration of the new SPX cooling towers, the installation was fairly routine, with low risk and no surprises.