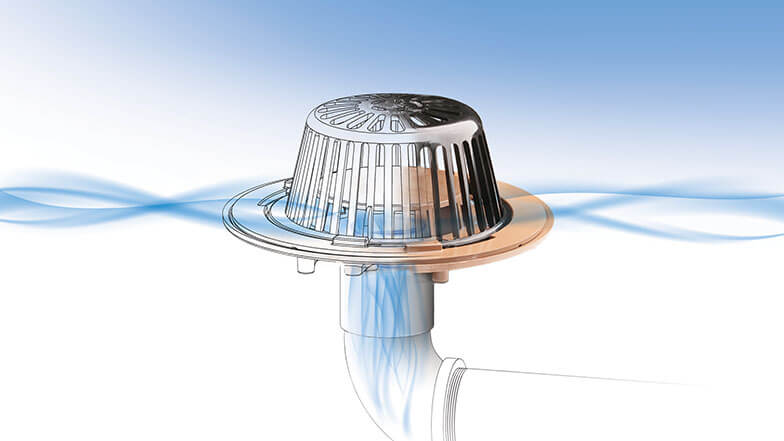 Smith siphonic drains, combined with a properly designed siphonic system, will completely fill up, or prime, with water and initiate a siphonic flow within as little as 15 seconds.

Siphonic drain systems are not well understood in the United States, but they allow for greater flexibility in design, are far more efficient than a traditional drainage system, and often save money in labor and materials. Siphonic drainage is not new. It has been used since the early 1970s, and in Europe it is considered the norm. Jay R. Smith Mfg. Co. is the first American company to design, manufacture, and market a siphonic roof drain. Still, many plumbing engineers rarely consider siphonic systems for buildings in the United States.

Most people are familiar with the principle of the siphon. A siphon is created by placing one end of a flexible tube into a container filled with fluid—say, a car’s gasoline tank. The other end of the tube goes into a container placed at a point lower than the first. Once you start the flow of fluid, usually by suction, gravity takes over and continues to draw the fluid through the tube. If air does not enter the tube or the tank does not run dry, the liquid will continue to move from the tank into the container. The greater the elevation difference between the inlet and outlet of the tube, the faster the fluid will flow. This effect is known as a siphon.

This same principle can be applied to a roof draining system. However, with a roof, because the piping only drops downward, the priming process occurs naturally, with no suction needed to initiate it. The priming starts at the drain itself. A unique air baffle inhibits the addition of air into the piping system and stops the vortex, producing a more linear flow. Smith drains, combined with a properly designed siphonic system, will completely fill up, or prime, with the water and initiate a siphonic flow within as little as 15 seconds.

How exactly are a traditional system and a siphonic system different? A conventional drainage system is an open system, meaning air is always present, and there is little if any pressure change throughout the entire system. As a result, the pipe is usually only half full of water. Even during periods of heavy rainfall, the rest of the pipe is full of air. This results in a channel flow, much like a trench drain.

A siphonic system is a closed system, meaning that the airflow is shut off by the air baffle, causing the piping system to completely fill with water and fully use gravity in the vertical drop. When the piping system primes, it depressurizes, meaning the water pressure through the system is reduced because of gravity on the vertical drops. In this setting, atmospheric pressure pushes the water into the drains with a force of 14.7 pounds per square foot. The capacity of the siphonic system is determined by the piping system itself and the height of the roof drain above the point of discharge.

Because the piping primes and operates when 100-percent full, or full bore, the same amount of water can be carried off the roof through smaller piping at higher velocity. This can reduce the cost of the piping system by up to 50 percent compared with a traditional system.

A siphonic system offers greater flexibility in design and an easier installation than a traditional system, because flow velocity is independent of the pipe orientation, so the pipes can be laid flat. The ability to run the piping flat also means it can be easily installed in a ceiling, reducing or eliminating trenching and excavation underneath the slab. Finally, higher velocities nearly 100 times that of a traditional system mean that a siphonic system is also self-cleaning, reducing the need for maintenance.

Most buildings or structures can benefit from siphonic roof drainage, but siphonic systems are especially ideal for buildings with large footprints, such as airport terminals, aircraft hangars, covered malls, office complexes, factories, convention centers, warehouses, train stations, retail stores, and distribution centers. The only situation that is not ideal for a siphonic system is a building with divided roofs, or cricket systems, with multiple peaks and valleys. In this instance, the system can be more challenging to balance, and overflow systems are usually more complicated.

MCAA thanks Jay R. Smith Mfg. Co. for being a major sponsor of MCAA2020 and providing the badges and lanyards.