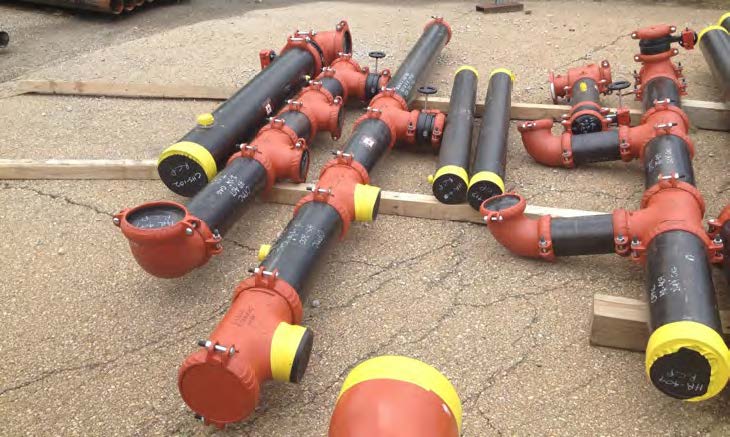 Using Victaulic grooved pipe and couplings, P1 Group prefabricated most of the piping for the OPRMC because of space limitations at the fully functioning medical center, saving time onsite as a result.

Victaulic’s Construction Piping Services (CPS) division helped P1 Group, Inc. win the bid for a major hospital expansion project by creating a 3D model of the mechanical systems, electrical systems, and ductwork. In the bid, P1 Group also made the case for Victaulic grooved mechanical piping systems for the project to save time and costs on installation.

“We view Victaulic as labor-saving and project cost-saving, so we propose it on many jobs because we believe it gives us a competitive edge,” said Eric Affolter, project manager at P1 Group.

More Than One Hurdle

As the Kansas-based mechanical contractor began work on its proposal for the Overland Park Regional Medical Center (OPRMC) project, a $110-million hospital expansion, the contractor speculated that a 3D model could help tip the scales in its favor. Although P1 Group has in-house detailing services, the availability of resources was limited at the time of the proposal. Even more daunting, the specifications called for welded piping systems. P1 Group would need to make the case for grooved systems in its bid package.

In 2011, HCA began planning a sizable expansion to handle growth in the geographic area, resulting in increased patient volumes. The plan called for the addition of a three-story patient tower and a new parking garage, as well as renovations to the emergency department and trauma center. A walking trail was also added to the grounds. In total, 127,000 square feet of space was added to the medical center. Mechanically, plans called for the addition of two boilers and a deaerated tank, two chillers, three chilled-water pumps, and three condenser water pumps in the central plant, plus seven air handling units. Two heating-water pumps and two heat exchangers were added to the remote central plant.

Standing Out from the Crowd

When the OPRMC project entered the bid stage, the mechanical systems were not fully designed; the conceptual design represented only about 20 percent of the job. As one of the preselected mechanical contractors for the project, P1 Group was focused on formulating a creative solution to help win the job.

P1 Group is one of the nation’s premier mechanical, electrical, and service contractors, with more than 1,000 employees. Incorporated in 1998, P1 Group’s founding companies have been in business since 1919. The Lenexa, KS-based company provides a variety of specialty contracting services through its commercial, industrial, and health care divisions, with offices in Kansas, Missouri, Iowa, and Nevada.

Temporarily unable to meet the demands for 3D modeling in house, P1 Group looked for alternatives to offload some of the modeling work and turned to Victaulic for assistance. The manufacturer also offers drawing and coordination packages through its CPS division. Dedicated project teams work with contractors prebid to produce 3D, proposal, or first-pass precoordinated models. In the preconstruction phase, services are tailored to meet the contractor’s needs, from basic drafting services to full business information modeling (BIM) coordination packages.

Although P1 Group had not previously worked with the Victaulic CPS team, it was well acquainted with the company’s products and the services and support that back them up. Despite reservations about outsourcing the prebid modeling work, Affolter reported that the project team went into it open-minded. “We work quite a bit with Victaulic, so we felt confident they knew what they were doing,” he said. “Evaluating the cost, it looked like it would be comparable or there would be savings, to some degree, to what we would have done.”

The Victaulic CPS team adhered to the BIM execution plan and developed a 3D model of the piping and equipment layout based on the portion of the project that had been designed. In addition to serving as a selling tool, proposal models offer contractors a head start on mechanical space design and coordination upon being awarded the project.

Making the Case for Grooved Piping

With the detailing resources challenge solved, the next step was to ensure the proposal would be the lowest bid. “It was a competitive preconstruction proposal, so we needed to have the lowest number in order to secure the project,” Affolter said. “We were trying to utilize any advantage we could.”

One of the advantages P1 Group employs is Victaulic grooved mechanical piping systems. The P1 Group preconstruction team prepared a cost comparison for welded versus grooved piping as part of their proposal submission. Victaulic systems were offered as a voluntary deduct. HCA accepted the proposal and awarded the mechanical and plumbing system coordination and construction to P1 Group.

The design work that had been started prebid continued after the contract was awarded in early 2012. To complete the fully coordinated BIM drawing, the Victaulic CPS team modeled the central and remote central plants while the P1 Group detailing team modeled the systems in the new patient tower. A majority of the mechanical systems were designed using Victaulic components, including hot and chilled water, condenser water, pumps and boilers, plus some of the domestic plumbing. Victaulic QuickVic™ and AGS couplings were used to join piping systems from 2.5″ to 24″ in size.

With the models complete, CPS generated fabrication drawings, shop drawings, and spool sheets tailored to P1 Group’s installation plan to jumpstart fabrication. P1 Group began mobilizing onsite in late 2012, and by early 2013, fabrication and installation of the mechanical systems was underway. Most of the piping was prefabricated in P1 Group’s shop and sent to the jobsite for installation as the laydown area and work space was limited at the fully functioning medical center.

Space constraints also created challenges in the existing central plant, but the use of Victaulic systems helped overcome them. “We had to run some new services—chilled water, condenser water, large-diameter steel pipe services—through an existing mechanical room,” Jordan King, field foreman on the OPRMC project, explained. “Really, Victaulic was the only way to go. Trying to weld in some of those places just wasn’t feasible.” Mechanical and plumbing system installation was completed and fully functional by March 2014. The grand opening ceremony celebrating the completion of the overall project was held later that year on August 19.

The OPRMC expansion was the first HCA project that used Victaulic piping systems, but it will not be the last. The successful installation resulted in a mindset shift; the owner now accepts the pipe-joining method, and grooved systems have been used in another HCA facility.

The project was a success, with P1 Group crediting the help of Victaulic. Affolter recounted that it would have been hard to handle all the work in-house. “It helped manage our resources and talent internally with outsourcing it to [CPS],” he said of the modeling and BIM coordination. Overall, Victaulic CPS services and grooved piping systems helped P1 Group win the project and deliver an on-time, on-budget completion.

For more information, visit www.victaulic.com. MCAA thanks Victaulic for being a major sponsor of MCAA 2016 and for cosponsoring the Annual Golf Tournament.