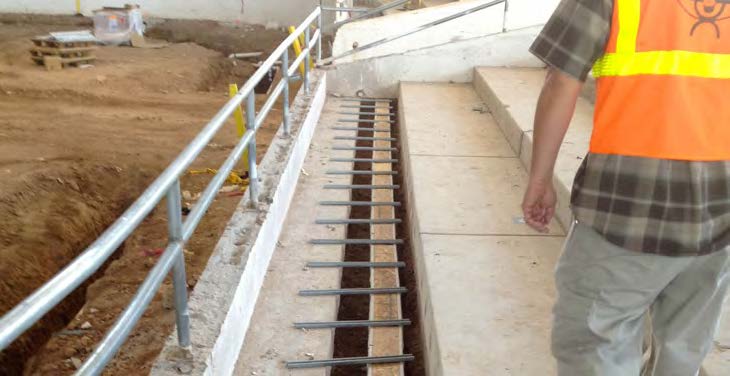 By installing the Enviro-Flo drain from Jay R. Smith Mfg. Co. in Scottsdale’s Equestrian Center, staff can hose down the seating area after events without worrying about the water flowing into the arena’s dirt floor. The Enviro-Flo was easier to install than standard floor drains, saving time and money.

All stadiums and arenas tend to get dirty, but an arena floor covered in dirt poses a unique problem. Keeping such an arena clean is the challenge that Scottsdale, AZ, faced when it decided to undertake a $42.8-million expansion of the Tony Nelssen Equestrian Center at WestWorld—a challenge solved by an Enviro-Flo drain from Jay R. Smith Mfg. Co. In addition, the Enviro-Flo was easier to install than standard floor drains, resulting in cost savings.

The goal of the expansion project was to enclose the Equidome and introduce climate control. But the dirt floor means that during the course of a show, horses’ hooves kick dirt up into the air that floats into the grandstand, covering the stadium seating and floors in a fine coat of dust.

One might think people in dirt houses shouldn’t throw water, but that’s exactly what the WestWorld Equidome Arena employees do after each show. Thanks to the ingenious use of the Enviro-Flo drain, it turns out hosing down the stands is the fastest and easiest way to clean up without creating a larger mess.

The challenge was how to capture all the water coming out of 1-1/2” fire hoses used to wash down the stands, which was heading straight for the dirt floor of the arena. To avoid ending up with a mud pit, the arena needed a way to catch all that water and dirt and get it out of the seating area quickly.

Installing standard floor drains into the existing concrete structure would not do the trick. Not only would water have to be directed specifically to the drains, but also the drains would not get rid of the water fast enough. There was the potential for mud to build up and clog the drain, resulting in an overflow situation.

Instead, contractors installed a trench drain system around the entire perimeter of the arena at the bottom of the existing seating area. This system would allow WestWorld employees to hose down the stands from top to bottom and from any point in the grandstand. The Enviro-Flo from Jay R. Smith Mfg. Co. with a presloped (.6 percent) radius channel and smooth, uniform interior was selected to handle the high volume of water and dirt.

Water and dirt would flow down through the grandstand and go straight into the trench. The drains had the ability to deal with a rush of water and dirt moving down and out of the stands. The trench drains were able to capture the water and prevent it from reaching the dirt-covered arena.

One reason for choosing the EnviroFlo was the cost savings due to easier installation. The lightweight, 100-percent polypropylene construction, along with the Enviro-Loc® mechanical interlocking joint and molded outlet connection, make the EnviroFlo contractor-friendly.

For jobs similar to the Equidome where the trench drains have to cover a lot of ground, the Enviro-Flo II will be available in 20-meter sloped and 20-meter non-sloped configurations. The tongue-in-groove connection will also speed up installation because it requires no screws or channel clips. The new channel insert, also made of post-industrial recycled material, can be easily removed by the contractor after the concrete is poured.

horse urine better than metal rail and cast iron grates, which would have rusted or deteriorated over time. But this job wasn’t only about the mechanics. Because the Equidome hosts some of the nation’s most prestigious equestrian and other events, like the Barrett-Jackson Collector Car Auction, the City of Scottsdale also wanted a drain system that was aesthetically pleasing. The Enviro-Flo had an added advantage because it was available in a choice of colors.

The city chose a grey finish that blended in perfectly with the surrounding concrete.

Several events have taken place since the Enviro-Flo installation, and the drains are performing well as expected. Crews have been able to wash down the stands and the arena has stayed dry.