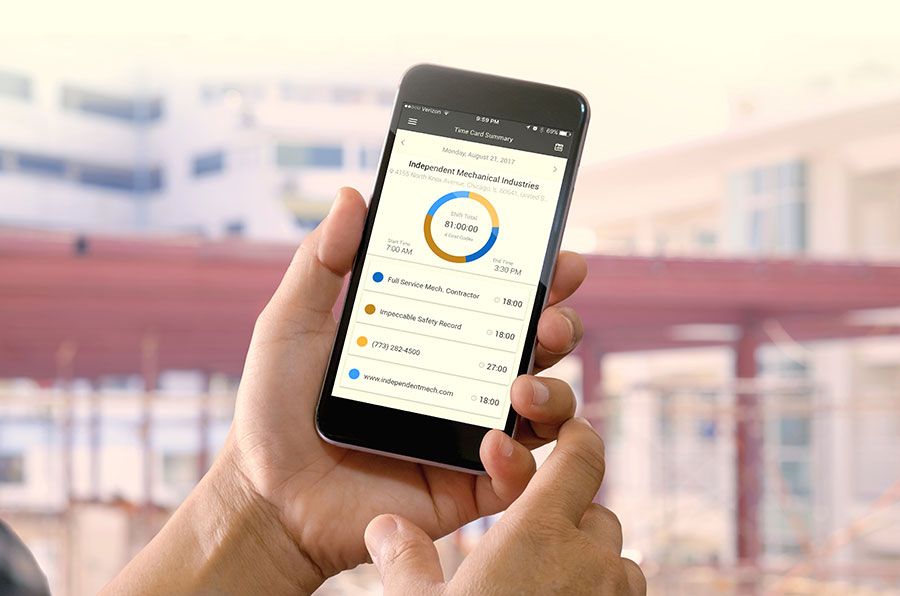 IMI foremen use the Rhumbix app on their iPhones to record time cards in minutes, so they can spend more time focused on the work at hand. As a result, the payroll process is smoother and there are fewer errors.

Manual collection of paper time cards in the field is prone to errors, takes too much time, and, most importantly, takes attention away from important jobs in the field. Since rolling out Rhumbix so their foremen could go paperless, Independent Mechanical Industries, Inc. (IMI) has found, “Foremen use the Rhumbix app on their iPhones to record time cards in just minutes, [which] allows them to clear their minds and attack the work in front of them,” said David Reynolds, IMI vice president.

Reynolds and the executive team at IMI, based in Illinois, are constantly looking for new tools for their project teams in the field to “help them run their jobs more efficiently,” he said. Furthermore, IMI wants to attract and retain the best people in the business. “We want to show our field that IMI is advancing in terms of using technology and tools they need. I hope they see IMI as the best place for them to continue their career,” said Reynolds.

Reynolds is the fourth generation of his family to work at IMI. One of his responsibilities as vice president is overseeing operations and information technology. He led the effort to incorporate Rhumbix as a key tool for IMI’s foremen and the home office.

Since rolling out Rhumbix, “all I need to do is log into the Rhumbix dashboard and review hours. I don’t have to put out fires anymore.”

Before Rhumbix, “We were faxing over time sheets or snapping pictures on cell phones and sending them in. Sometimes the picture or fax quality wasn’t great either,” Reynolds noted. “The result could be as simple as the payroll clerk not being able to read the timecard, or worse, the time is incorrectly entered and a check gets cut for incorrect time. On top of this, and most importantly, the back-and-forth between payroll and our foremen on correcting errors took valuable time away from production. That’s too much time taken away from the office and the field correcting errors.”

“[Rhumbix] is eliminating errors, saves time, and frees up our payroll clerk for other important jobs.”

Reynolds continued, “The ability [of Rhumbix] to eliminate errors from reporting time from the field to the home office was a major draw for IMI to start using Rhumbix.

“At the Home Office, Rhumbix is, without question, an efficiency improvement and timesaver,” said Reynolds. “We simply upload an Excel file from Rhumbix right into our accounting software
(Viewpoint) for payroll. [Rhumbix] is eliminating errors, saves time, and frees up our payroll clerk for other important jobs.”

Since rolling out Rhumbix, the time-card-to-payroll process at IMI runs more smoothly and does not require costly reconciliation. “I’ve been able to become more handsoff. … All I need to do is log into the Rhumbix dashboard and review hours. I don’t have to put out fires anymore,” Reynolds stated.

IMI is continuing to roll out Rhumbix to additional foremen, and the company is seeing even more time go back into production-based activities. Furthermore, IMI is reviewing Rhumbix Pro, which introduces automated reports and dashboards to measure budget vs. actual production data.

“We want to make sure our field knows that IMI is going to give them the best tools to run their job as smoothly as possible,” Reynolds observed.