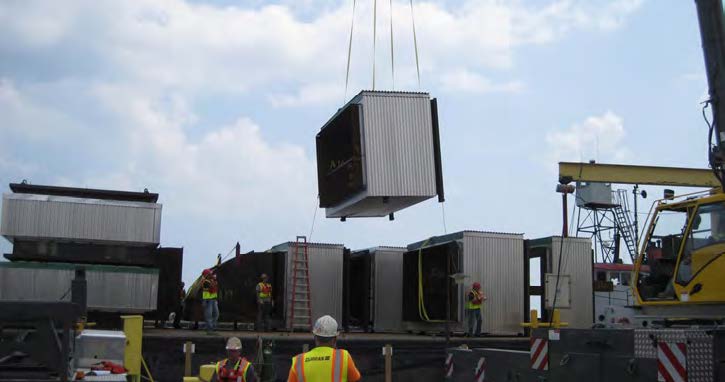 Hayes Mechanical said high-quality LGH equipment enabled them to build a complex rigging system to install new ductwork when a crane was not feasible. LGH even provided spare chainfalls in advance, allowing Hayes Mechanical to return the unused parts at no charge.

Without careful planning and support from Lifting Gear Hire (LGH), Hayes Mechanical might not have been able to install the new ductwork required by the Environmental Protection Agency (EPA) for a Midwest power generation company, which would have caused the power plant to close. Thanks to high-quality LGH equipment, backed up by a strong commitment to customer service, Hayes Mechanical finished the project on time, and the unit was released back to the customer ahead of schedule.

For the “hot to cold duct conversion” project, Hayes Mechanical installed new ductwork to reverse the flow of gases going through an existing electrostatic precipitator using air chain hoists, trolleys, MODULIFT® modular spreader beams, and rigging supplied by LGH. The project involved changing the flow of gases going through the precipitator to reduce the operating temperatures, which would in turn reduce mercury emissions. According to Bill Bluis, the vice president of industrial construction at Hayes Mechanical, the boiler flue gas duct modification project required the removal of over 625 linear feet of existing ductwork to be replaced with a new reconfigured design.

“With as many pieces as we needed, we knew we’d be getting the commitment and dedication that we needed for our equipment from Lifting Gear Hire.”

The existing precipitator structure was directly over the ductwork that required replacement, which prohibited the use of a heavy lift crane. Moreover, staying on schedule was paramount to the success of the project. The plant faced closure if the work was not completed and the EPA emission parameters were not met by the end of the year. These challenges also impacted the way the new ductwork would be built.

Bluis added, “This was an outdoor project, with the plant being located right on Lake Michigan, so weather was definitely a factor. Additionally, we were working around an operating facility with the second boiler on line during the course of the work.”

The biggest key in implementing the project plan was developing concepts to perform the rigging and execution of the temporary rigging design so that Hayes Mechanical could work with the duct fabricator to manufacture 72 duct modules complete with insulation and lagging in certain sizes for the areas in which they were to be placed. The new duct modules were shipped by barge to the Waukegan Harbor and later trucked a few miles down to the plant.

Bob Segiet, project manager and site construction supervisor, said, “We had to design and install an extensive system of monorails, trolleys, and chainfalls to demo out over 400 tons of the old duct and to maneuver the new modularized sections back in.” Segiet continued, “When we talk about the monorail system, it wasn’t one point of entry and one end point. We erected 60 tons of temporary structural steel and used upwards of 70 individual rigging pieces like the chainfalls and trolleys to manipulate a few different locations at the same time in order to move the duct work in and out of the structure. It couldn’t be done one piece at a time. It would’ve taken too long.”

Despite the challenges involved, it was clear to Bluis and Segiet just what was needed to ensure a successful project.

“We involved LGH’s local representative early on,” said Bluis. “We knew the quantities of the rigging we would be using were a little more than what they were used to seeing on a power plant job from us. We worked with the local rep to make sure we had the right pieces and quantities available right from the start of the job. Of course, there were other vendors available, but what sold it for us was obviously the quality of the equipment. With as many pieces as we needed, we knew we’d be getting the commitment and dedication that we needed for our equipment from LGH. Not to mention, if we had a piece of equipment go down, we’d get a spare or a replacement in less than 12 hours.”

“We have worked with LGH for many years,” Segiet added. “Because of the reliability and condition of the equipment, we were very confident that when the equipment came out, it was going to be rebuilt, inspected, and ready to go. Also, LGH provided all the documentation we needed for the lift plans as well. This made it very easy for us to get right into the project.

“There’s always potential for a piece to go down,” Segiet concluded. “When you’re using 46 chainfalls it’s a real possibility. However, LGH gave us spares, wrapped them in plastic, and told us if they’re not used, then return them and you will not be charged. That’s quality of service I’ve never seen before.”

From an engineering standpoint, the goal was to reduce the operating temperatures of the precipitator by 350° F. Thanks to the efforts exerted by Bluis’ and Segiet’s team, Hayes Mechanical was able to accomplish their endeavor, and the project was deemed a success. Reducing the operating temperatures of the precipitator lowered the mercury emissions present in the facility, allowing the facility to meet the EPA standards required and continue operation.