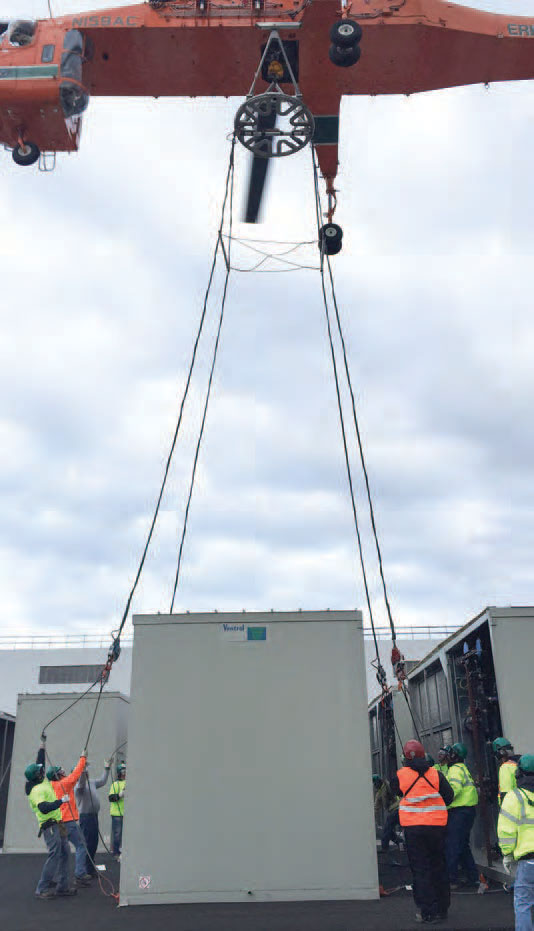 To keep on track with its project timeline, John W. Danforth Co. turned to Erickson Incorporated, a global provider of innovative aerial services, to place 44 sections of rooftop HVAC units securely in place in just one day. Erickson flew a Sikorsky S64 Aircrane helicopter above SolarCity’s 1.2-million-square-foot factory in Buffalo, NY. The Aircrane has a 25,000-pound lift capacity and easily carried the HVAC units—weighing between 14,000 and 18,000 pounds—in less than seven hours.

“Partnering with Erickson and strategizing on this unique delivery method saved the project many weeks of installation time, as well as substantially lowered total install cost of the units. Utilizing a traditional method of land cranes and rail systems posed a much higher safety risk and ultimately may not have supported the required construction completion dates,” said Rich DeLotto, project manager with JW Danforth.

“Partnering with Erickson and strategizing on this unique delivery method saved the project many weeks of installation time, as well as substantially lowered total install cost of the units.”

In late September, Erickson met with all parties at the job site to review operational details, such as rigging, flight path, and roof delivery. To ensure efficient operations the day of the lift, Erickson suggested that the ground crew rig have the helicopter at all times. Empty rigging was then hauled back from the roof by the helicopter. Metal bump stops and guides were also used on the dunnage to act as mechanical assistance for precision placement of each set.

In the first week of November, the HVAC units and equipment arrived at the jobsite by truck. A land-based crane off-loaded the units. The Aircrane and support equipment arrived a day ahead of schedule to avoid heavy winds forecasted later in the week. Last, a prelift walk to check of all areas was performed on the day before flight.

On the lift day, a safety briefing was held at 6:30 a.m. and flight activity began at 7:30 a.m. With three pilots aboard the helicopter and a 26-member crew on the ground and roof, all 44 units were lifted in just six-and-a-half hours. The crew on the ground included JW Danforth employees, plumbers and steamfitters from UA Local 22, and sheet metal workers from UA Local 71. The flight path was a direct route between the materials pick site to the rooftop set site. Flight activity ended at 1:30 p.m.

JW Danforth was very thorough in communicating plans to the ground crew. That close coordination with Erickson resulted in a safe, efficient project.