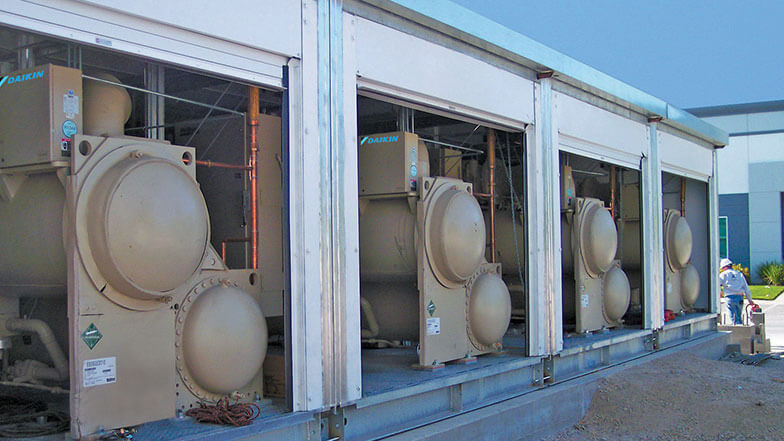 With fast installation as high a priority as efficient cooling, Herakles Data of Sacramento, CA, chose pre-engineered, pre-assembled Daikin Modular Central Plants to meet their cooling demands. “Our number-one requirement in selecting a new system was speed,” said Laurence Stancil, director of facilities at Herakles Data. “The new cooling system had to be installed and operating as fast as possible, with minimal interruption.”

Four Daikin modular systems were successfully installed in just one week, resulting in no downtime for the data center. Moreover, the new systems
slashed energy use, earning Herakles Data a substantial municipal rebate.

Positioning itself as the ultimate data center, Herakles Data offers uninterruptible power, improved cooling, and redundant internet bandwidth to its co-location customers seeking to outsource their primary or disaster recovery IT infrastructure. At a co-location data center, corporations rent specific spaces to operate their data servers in a common physical location alongside the servers of other companies.

“Final site assembly was a very clean process—fast, easy, and efficient. … I would never do it the old way again.”

With all the critical servers housed in the facility generating heat, “cooling is essential to our business,” said Stancil. “In fact it’s the number-two essential factor after uninterrupted power for our customers.”

Herakles Data President and CEO Lou Kirchner stressed how important cooling is to their success. “We’ve had customers come to us after leaving a previous data center because cooling was inadequate or unreliable,” Kirchner said. “And with the newer servers being more powerful and more compact than ever, they produce even more heat. With our facility near 100-percent capacity, it’s critical that our cooling capacity be able to handle the heat of the newest generation of servers.”

Herakles Data realized that its rapid business growth meant that it had outgrown the capacity of its existing four air-cooled Daikin chillers. It now needed additional capacity that could meet the demands of its mission-critical interior space and ambient temperatures that typically reach 95° F during the summer. “Under California’s Title 24 standards, we couldn’t add a fifth chiller to meet our growing capacity needs, so we had to consider alternatives outside the box,” said Stancil.

“Modular central plants are a simple yet brilliant solution to today’s business requirement for consistent, quality design and zero downtime. It’s the only way to go.”

Herakles Data evaluated its alternatives and selected Daikin Modular Central Plants. Modular central plants are pre-engineered and pre-assembled, with the chiller, pumps, cooling tower, and interconnected piping from one supplier, and then shipped to the jobsite for final assembly. Their unique modular configuration reduces site assembly time compared with traditional “site built” cooling plants, with the chiller, cooling tower, pumps, and piping all coming from separate sources.

Stancil was initially skeptical of the modular central plant concept, but the installation process made him a believer. “Our first four modular ventral plants were dropped, bolted, and wired—fully assembled—in a week. I’d compare it to changing a propeller in flight,” Stancil said. “You have to get it right the first time. And we did. Final site assembly was a very clean process—fast, easy, and efficient.”

It was so fast and easy that Stancil now prefers the modular central plant concept to the traditional site-built central cooling plant. “I would never do it the old way again,” he said.

Kirchner was especially pleased that the one-week installation process resulted in zero downtime for the data center. “It was seamless for our customers,” said Kirchner.

Kirchner’s original goal of increased cooling capacity to meet Herakles Data’s projected growth was not only achieved, but also surpassed. “We provide N+1 business solutions for our customers, meaning we meet their needs plus provide redundancy,” he said. “Today, however, we have surpassed that goal, because we typically run only two of the four original modular central plants. That results in 2N cooling capacity today available to our data center customers.”

In addition to fast-track construction and commissioning, the new Daikin Modular Central Plants resulted in impressive energy savings compared with the old system. “Our old system used 3,600 kilowatt hours (kWh)/ton a day; the new system uses 2,800 kWh/ton a day for a 22-percent reduction in energy,” Stancil noted. That reduced energy usage earned Herakles Data a $50,000-rebate from the Sacramento Municipal Utility District for the new system.

Kirchner sums up the entire experience as phenomenal. “Modular central plants are a simple yet brilliant solution to today’s business requirement for consistent, quality design and zero downtime. It’s the only way to go.”

For more information, visit www.DaikinApplied.com. MCAA thanks Daikin Group for being a benefactor of MCAA18 and providing beverages on Wednesday evening.