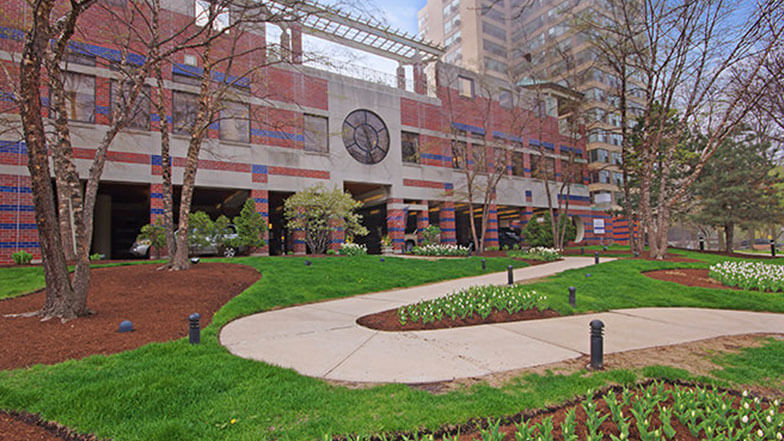 Through careful planning and coordination with the city, Daikin successfully installed a new chiller in the Brookdale Senior Living Center in Chicago with minimal disruption to the senior residents and their neighbors.

A construction project at a senior living facility presents a specific set of challenges. For the Brookdale Senior Living Center in Chicago, Daikin overcame those challenges by combining customized products, advance planning, and know-how for successful installation of a new chiller, ensuring the project stayed on time and within budget.

Daikin North Central Regional Owner Sales Manager Robert Ambrose and his team set out to upgrade the HVAC system at the 42-story high-rise senior living residential complex. “The original machines from construction were approximately 30 years old. In the course of conducting a comprehensive inspection of one of those machines in the summer, it was discovered that to continue with those machines just didn’t make any financial sense,” Ambrose said.

Brookdale Senior Living Center is located in a busy residential neighborhood along Chicago’s famous Lake Shore Drive. Installing a chiller in an active neighborhood is a big task on its own. Adding on the needs of an on-site population of seniors to the mix, the installation became that much more of a challenge. “We had a chiller made to order,” said Ambrose, specifically a Magnitude® magnetic bearing water-cooled chiller to serve approximately 158,000 square feet of space. Daikin’s Magnitude WMC chiller is up to 40 percent more efficient than standard centrifugal chillers.

To install the chillers, “We made a pretty prolific rig,” Ambrose stated. “It was a significant lifting process that involved coordinating emergency medical services, city street access, and the care and well-being of 200- plus senior residents.”

Ambrose explained, “We had to consider a route in the event of any medical attention being needed, for services to enter uninterrupted and unimpeded. We were occupying the entire means of getting to this building. We were using almost two blocks to build the crane. There was a hospital one street over, so we made sure their route was open. We had to make sure we could get to this building and do all this within the methods of operation of the city of Chicago.”

With so many moving pieces to consider, getting the work done in a speedy fashion was vital. “The work began at 7 p.m. on December 7th,” Ambrose said. “It took 12 hours to build and erect the crane. It was ready to go by 8:30 a.m. on December 8th. We removed one machine and brought out the other machine in pieces, disassembled the crane, and gave them back access to the site by 10 p.m.”

Even with the quick turnaround, the need for emergency access did come into play. “There was an ambulance call,” Ambrose noted. “We didn’t impede the emergency medical services’ ability to get in, remove the person, and go. We got an ‘attaboy’ from the fire department for that.”

Along with coordinating with the city and emergency services, Ambrose’s team also established a strong working relationship with the management and residents of the building. Jeffrey Ludwig, Brookdale Senior Living’s regional director of property management, was impressed by Daikin’s extensive planning and communication in advance as well as throughout the execution of the project. “Watching the chiller lift was like watching a well-composed orchestra,” said Ludwig. “The Daikin team did an outstanding job. There were no issues. We beat the time and made the budget. It was a mutually successful project.”

Ambrose said it was fortunate that some uncontrollable factors never came into play. While the weather was obviously beyond the team’s control, the Daikin team did its best to plan even for that. “We tried to forecast this,” Ambrose said. “We had everything ready to go four weeks before we needed to do it. We weren’t playing around. This wasn’t a roll of the dice. We were waiting and waiting for the weather to break at the right time, and it did.”

MCAA thanks the Daikin Group for being a benefactor of MCAA2020 and supplying beverages on Wednesday evening.