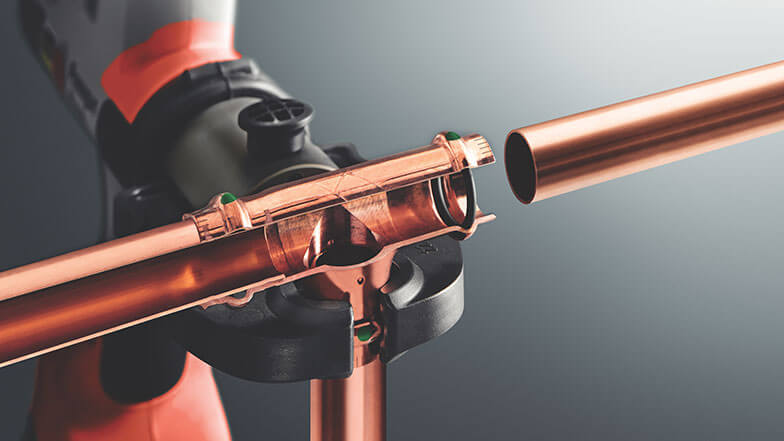 Brandt uses Viega ProPress almost exclusively because of its reliability and ease of use; the company says it has saved countless dollars in installation time as a result.

Tools Pay for Themselves Quickly by Minimizing Installation Time

“We’ve been using Viega for a long time,” Hawkins continued. “The first project I remember using press on was the Plano Presbyterian Hospital, around the mid-2000s. We have a standard spec set up for all our work, and I’d say probably 98 percent of our work is Viega. Really, it’s a Brandt standard.” The new campus includes several office buildings and a specialty building, plus multiple parking garages on about 100 acres of land. The main plant has five 1,200-ton chillers and five cooling towers to deliver the chilled water to the buildings. That work was all done in ProPress Copper, sizes 3” and smaller. Approximately 75 restrooms across the campus receive hot and cold water run via ProPress as well.

Hawkins pointed out that Brandt has a large stock of ProPress guns, and that it is easy to train new employees on them. At first, he said, the cost of tooling was concerning to some, but after so many years and countless dollars saved on installation time, everyone can see how quickly the tools pay for themselves. Plus, the ease of use of ProPress is important for the way Brandt runs their installations.

“We have a pretty rigid policy. Every joint that’s made, it has to be signed off by the installer. He puts his employee number on the joint,” Hawkins explained. “In our many years of use, we might have had a couple of issues, but they were installation issues, not issues with the fittings.”

Viega District Manager Joel Armstrong lent a hand at the beginning of the project, training some of the employees working on the installation to make sure everyone was on the same page. Hawkins said Brandt usually conducts a refresher course for large projects like these so that there are no issues down the line during installation.