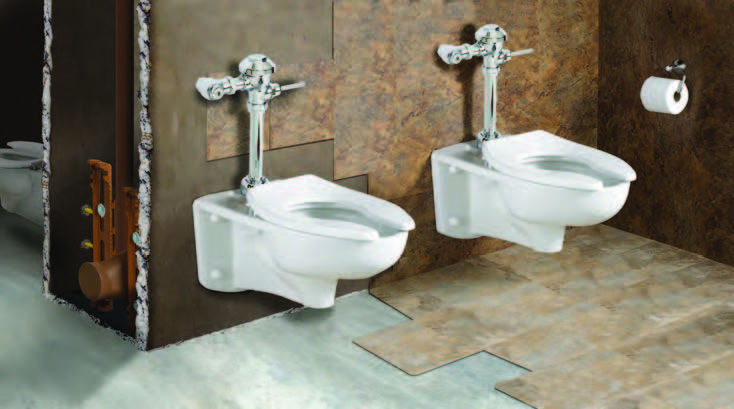 The Children’s Hospital Colorado, Anschutz Medical Campus, in Aurora, CO, had been open less than 5 years when their reputation as one of the nation’s leading hospitals led them to expand the still-new facility. In February of 2011, the hospital embarked on a $230 million renovation and construction project, which included a three-story addition and renovation of 89,985 square feet of the existing structure. The renovations took place in active areas of the hospital that administered critical care to patients. Throughout the project, all of the contractors were challenged to think outside the box to minimize the impact of the work on patients and caregivers.

As any plumbing contractor who has worked on a health care facility knows, off-the-floor mounted fixtures are the standard, because infection control is paramount. Off-the-floor water closets make cleaning floors and walls efficient and thorough. Concealed water closet supports are essential to provide the proper structural support while relieving any loading from the wall structure.

The Quarterback Water Closet Support’s new leg design provides easy front access to the securing bolts, allowing easy height adjustments even with adjacent wall framing. Four securing slots per leg allow for the securing of attachments and accessories. This design provides versatility in the prefabrication of water closet batteries while allowing the required slope in the horizontal waste line. The redesigned legs also provide a better fit against the angle iron often used for prefabrication. When working inside a shallow chase, an offset in the faceplate moves the legs back, providing a rough in depth that is 3/4” shallower for singles and 1-1/2” shallower for doubles.

Another significant improvement is the new vent placement. Vent placement 2 3/8” from the centerline of the waste outlet eliminates interference with the water supply to the flush valve, especially in back-to-back applications.

Most of Braconier’s work on the hospital project took place in individual patient rooms, rather than public restrooms with multiple fixture installations. The project involved a mix of newly constructed patient rooms and, on some floors, rooms that had been shelled out during the original construction.

When working in the individual patient rooms, Braconier found it beneficial to start the water closet support setup in their fabrication lab. They unboxed and assembled the faceplate to the fittings, adjusted them to the correct fixture outlet roughing height, and sent them to the jobsite.

The labor savings that resulted from using the Quarterback Water Closet Support and assembling it offsite reduced Braconier’s costs and added convenience. For the hospital project, however, Braconier found themselves in a situation where speed was especially important.

In the hospitals’ Neonatal Intensive Care Unit (NICU), for example, the project called for converting a oneroom unit, where patient beds were separated by curtain dividers, into individual rooms to give the families of these vulnerable patients privacy during a very stressful time in their lives. The NICU was to remain operational while the work was taking place. The last thing Braconier wanted to do was increase the stress on the patients and families there. Stone said the Quarterback helped Braconier workers get in and out of the area with as little disruption as possible.

In total, 50 water closet carriers were installed. The entire project is expected to be completed in April 2014.

Stone said of Jay R. Smith Mfg. Co., “The products are good or we wouldn’t buy them. They listen to the feedback they get from contractors and use that feedback to review and innovate their product lines, helping customers meet demands of ever tightening schedules in today’s marketplace. They have a good inventory, so we’re able to get what we need when we need it. Their customer service is second to none.”