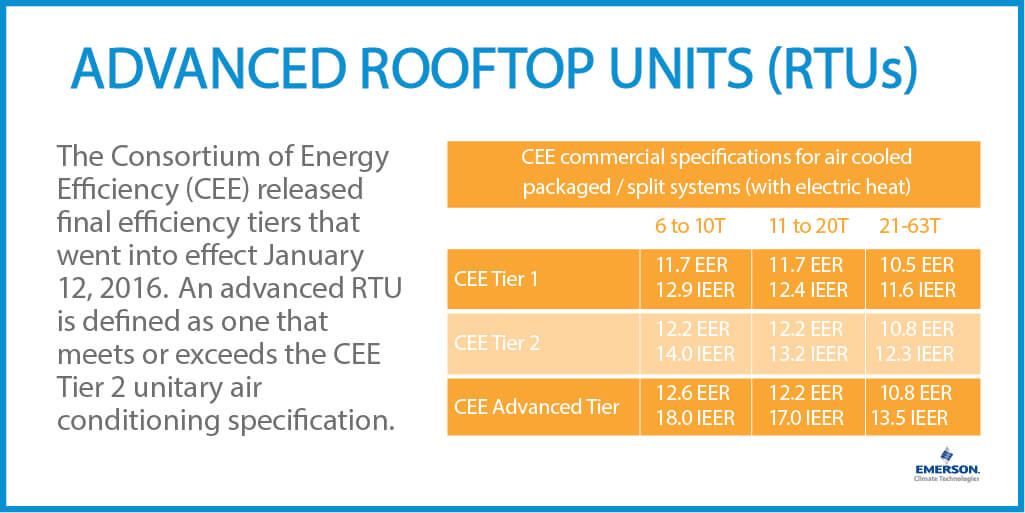 New CEE efficiency tiers for some products went into effect in 2016.

Emerson conducted a survey in 2015 of more than 450 HVAC professionals and found that only 11 percent are aware of upcoming commercial HVAC regulations and many don’t understand how those regulations will impact their business. Here are 10 things you need to know about the changes affecting the commercial air conditioning (AC) market.

1. Changes will affect many buildings. According to the U.S. Department of Energy (DOE), over half of the commercial real estate space in the United States is cooled by packaged HVAC equipment.

2. New energy code adoption is done state by state. The latest revision for commercial HVAC is ASHRAE 90.1-2013, which has already been adopted by five states. The balance of states have either adopted revisions that are older or have no standard code.

4. New regulations will be implemented in two phases. The first phase will begin in 2018 and will require, on average, a 13-percent efficiency improvement in systems. Five years later, an additional 16-percent increase in efficiency, on average, is required for new commercial units.

5. New regulations are expected to lead to cost savings and less pollution. Over the lifetime of the products, businesses will save $167 billion on their utility bills, and carbon pollution will be reduced by 885 million metric tons.

6. New efficiency tiers for advanced rooftop units (RTUs) are already in place. The Consortium of Energy Efficiency (CEE) released final efficiency tiers that went into effect January 12, 2016. An advanced RTU is defined as one that meets or exceeds the CEE Tier 2 unitary AC specification.

7. Buildings will need new or retrofitted higher-efficiency RTUs. A building owner can save as much as $3,700 per RTU by replacing aging equipment with high-efficiency units or retrofitting with advanced controls. Consider that a typical big-box retailer may have more than 20 units.

8. Regulations are driving system redesign. System manufacturers are redesigning AC equipment now to meet 2018 minimums and revising product portfolios to include new mid- and premium tiers above the minimum levels.

9. Modulation solutions can help regulation compliance. A cost effective way to meet efficiency standards is by installing tandems. In fact, according to an Emerson survey, 45 percent of contractors expect an increase in sales of tandems and trios as a result of new efficiency standards.