Demand for the PPP may be fading:  There were a few articles that came out on May 11 (example CBS and Business Insider) indicating that the demand for PPP loans seem to be slowing, one article indicated that as much as 40% of the second tranche of funds remain available. This is likely the result of the recent surge of comments from various sources (Mnuchin, Treasury, etc.) which have led companies to question eligibility, but also an indicator that general demand is finally being met. For those who are still attempting to attain a loan, it appears there is still time.

Comments from the SBA Inspector General:  The Office of Inspector General’s mission is to “provide independent, objective oversight to improve the integrity, accountability, and performance of the SBA.” This group authored an analysis of the PPP implementation process and also outlined some concerns regarding the forgiveness process and the term of the loans. There is a lot to unpack with respect to the document but here are some thoughts that were drawn from and important expert (below).  We don’t yet know if this document will somehow influence changes in the program, given the nature of the covered period, there is very limited time to do so.  It is possible that it will only be informational, we will see:

“In addition to the 75-percent payroll criteria, the maturity term established by the Administrator and the Secretary would require the borrowers to repay any amount not eligible for forgiveness within the remainder of the initial 2-year term. The Act, however, allowed for a maximum maturity of up to 10 years. SBA’s requirements could result in an unintended burden to the borrowers. For example, PPP borrowers who do not use at least 75 percent of the loan for payroll (therefore use more than 25 percent of their loan proceeds for nonpayroll expenses) may not be able to have all of their loan forgiven. It may be important to consider that many small businesses have more operational expenses than employee expenses. Our review of data from round one found that tens of thousands of borrowers would not meet the 75-percent payroll cost threshold and would therefore have to repay the amount of nonpayroll costs in excess of 25 percent in less than 2 years.”

The Rise of the Subcontractor

Join host Todd and guests “Queen of Prefab” Amy Marks of Autodesk, David Evans of Starr Electric, and Bob Snyder of Binsky and Snyder as t...

Did you know that 47% of construction companies reported spending less than 1% on IT? Make sure your experience is represented by taking #2020ConTechSurvey! Take the survey now at http://ow.ly/nEAO50AXJZn 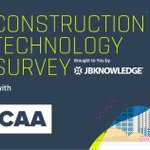 For sure. Totally comfortable in my #ConstructionDork status. There needs to be more of us and we need to spread these ideas faster through the industry. Keep up the good work, Dorks! https://twitter.com/pwrliftnerd/status/1292864688590651392