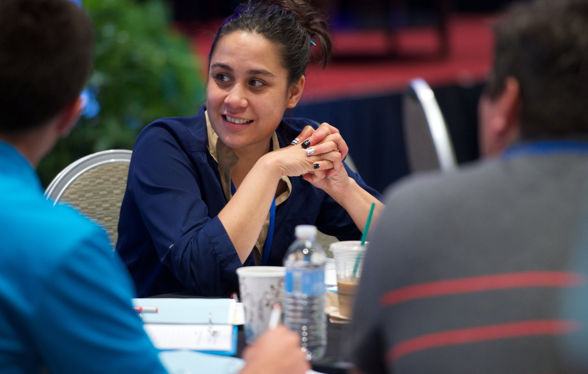 If you’ve hired a college student as an intern or a co-op, apply for a $1,000 Student Internship Grant from the Mechanical Contracting Education & Research Foundation (MCERF). Hire another intern and apply for another grant. You can apply for up to two grants through the end of this year.

Student interns or co-ops can greatly benefit your business. They will be eager to put their knowledge and skills to work on an actual project.  They have a fresh perspective on projects and problems, technology capabilities and a desire to learn more about our industry. With the added bonus of the grant, this initiative is a win-win.

If you would like to hire a student intern or a co-op for this spring and summer but haven’t found the right candidate, try MCAAGreatFutures.org.  Almost 240 well-qualified students from colleges and universities across the U.S. and Canada–all members of MCAA student chapters–have posted their resumes and are eager to talk with you about internships or full-time employment opportunities.  Check it out today! 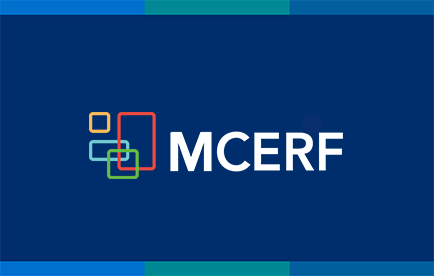 The California Plumbing and Mechanical Contractors Association (CPMCA), Benicia, CA, has contributed an additional $7,500 to MCERF, which raises their

total contribution to the Mechanical Contracting Education & Research Foundation (MCERF) to $262,500.  Charles (“Chip”) Martin, Executive Director of the CPMCA, says that he and the entire membership of CPMCA  support MCERF’s efforts to underwrite education for our industry and to help recruit and retain great young people for the industry.

President of MCERF, Mark Rogers, thanked the leadership and members of the CPMCA for their years of support of the Foundation.

Arden Building Companies, LLC (Pawtucket, RI) have contributed an additional $1,000 to MCERF, bringing their total contribution to $5,200 to the Mechanical Contracting Education & Research Foundation (MCERF).  Robert Bolton, President of Arden, says that he and all the Arden companies stand firmly behind MCERF’s efforts to “support industry education, particularly their emphasis on student and faculty internships.”

MCERF President, Mark Rogers, thanked Robert and all Arden associates for their support of the Foundation.

ARCA/MCA Executive Vice President, Richard J. Sawhill, said that the Board and

members of the association perceive great value in the work the Foundation does on behalf of the industry and that he looks forward to working with the Foundation for years to come. 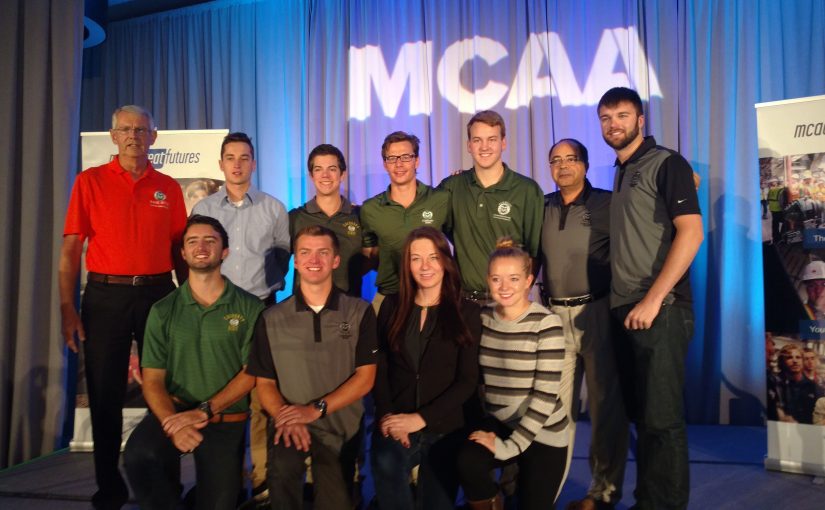 If you’re looking for a well-qualified student to hire as an intern or to fill a full-time professional position, MCAA has yet another resource to help you with your search—MCAA’s Student Chapter Contacts list.

Go to MCAAGreatFutures.org for other helpful resources. A map of all MCAA student chapters will show you which colleges and universities have established programs. And, once you get a lead on a great candidate, search our resume postings on the same site for that promising student. 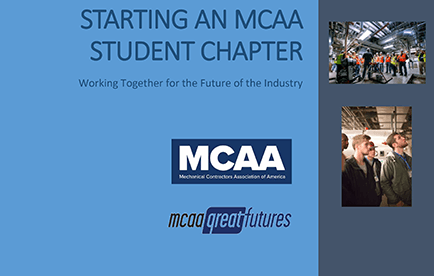 If your experience at the 2016 Student Chapter and Mechanical Contractors Summit inspired you to organize an MCAA student chapter, “Starting an MCAA Student Chapter” can help.

The brochure is revised, redesigned and updated to cover all the steps involved in organizing a new MCAA student chapter as well as the benefits of the program to help you recruit members. 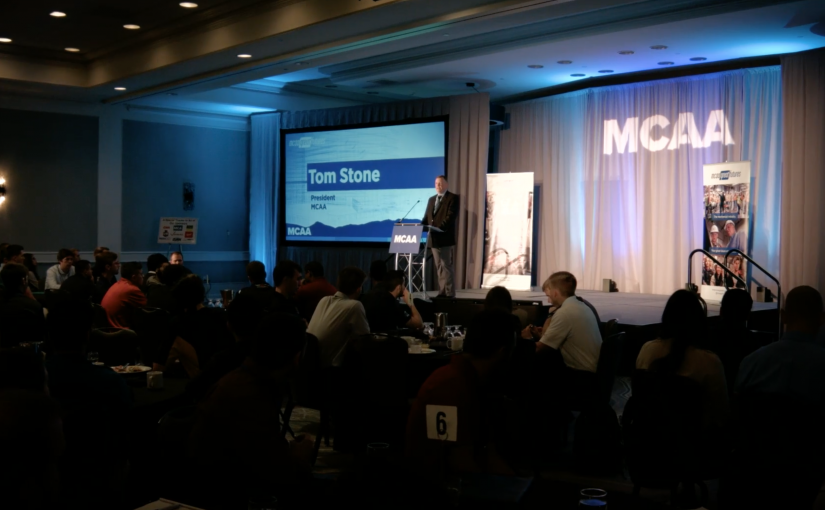 The Summit opened with a Technology Exhibit. Presentations from representatives of four of the industry’s newest and most dynamic technologies were featured, including those using augmented reality and the latest iterations of 3D printing. Attendees tried on, tested, tinkered with and talked about the technologies that they will use in their future career.

The educational program opened with welcome remarks by MCAA President Tom Stone followed by session led by David Hyland and John Santangelo of Trimble who discussed Robotic Total Station, the latest updates in the device and how this technology is being used in the construction industry.  Then Timothy Drake, president of the University of NE-Lincoln student chapter, explained how his chapter won the 2015 Student Chapter of the Year and offered some ideas about what chapters could do to improve their chances of winning next year. Jon Finch of Milwaukee Tool led a session that took real-world examples of young people who used social media to enhance their careers but who made some mistakes that ranged from silly to career-terminal!  Finch suggested ways for students to avoid such mistakes and how to be social media savvy when using those media to bolster their careers.

Dr. Blake Wentz of the Milwaukee School of Engineering ran the mini competition and presented the project and the background for the annual mini competition—the construction of a college fraternity house. The highlight of this annual event was the game show format similar to TV’s popular “Jeopardy” that involved all the student teams. A combination of teams 3 and 4 won the game and a $50 cash prize.

A panel featuring four recent graduates (all of whom were members of the MCAA Colorado State University student chapter) now working for MCAA contractors answered questions from the audience about what they’ve learned since leaving the college and joining the workforce.  They discussed the importance of work place chemistry, learning from the “seasoned veterans” and the value of internships as an excellent experience and skills-building tool.

The highlight of the Summit, however, was a tour of the Breckenridge Brewery, a local Denver favorite. Attendees learned how old-world artistry and modern technology combined to make some of the best craft beer around and then enjoyed a dinner featuring some of Denver’s favorite delicacies, including elk burgers.

Next year, we head to Indianapolis for more challenges and networking opportunities.

Frank Schaetzke of Pipersville, PA made a personal contribution of $500 to the Mechanical Contracting Education & Research Foundation (MCERF).  This brings Frank’s total personal contributions to MCERF to $2,500.  Frank is Vice President of National Contractor Accounts for Zurn Industries, LLC.  He hopes his support allows “…MCERF to continue its outstanding support of industry education and internships.  These efforts really differentiate the mechanical contracting industry from others.” 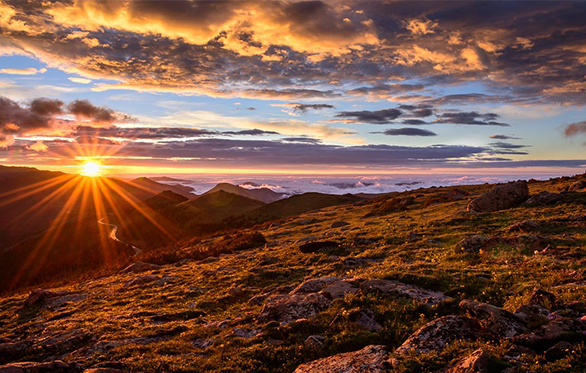 Sponsors of the GreatFutures 2016 Student Chapter and Mechanical Contractors Summit (October 13-15, Denver, CO) helped make this our best Summit ever.  MCAA thanks host MCA of Colorado and these fine member companies for their contributions to this annual conference: CNA, Milwaukee Tool, Murphy Company, NIBCO,  Victaulic, Viega, U.S. Engineering and Zurn.

Each of these companies sponsored some aspect of the Summit. CNA contributed to a buffet luncheon, NIBCO supported the backpacks, Viega sponsored the t-shirts, Victaulic covered the water bottles and Zurn sponsored Subway gift cards. MCA of Colorado, Murphy Company, U.S. Engineering and Milwaukee Tool contributed to a dinner at the Breckenridge Brewery, which Summit attendees also toured.

The Summit drew more than 240 future professionals, faculty advisors, MCAA members, local association executives and guests for learning and networking. Student attendees gained more insight into the mechanical contracting and service industry and may even have met a future employer!

The conference opened with a technology exhibit, organized by BuiltWorlds, featuring the latest technologies that mechanical and service contractors are using at project sites and throughout business operations to increase productivity and profits. Educational sessions, announcement of the 2016-2017 MCAA Student Chapter Competition and the annual mini competition with a new twist offered a memorable experience. 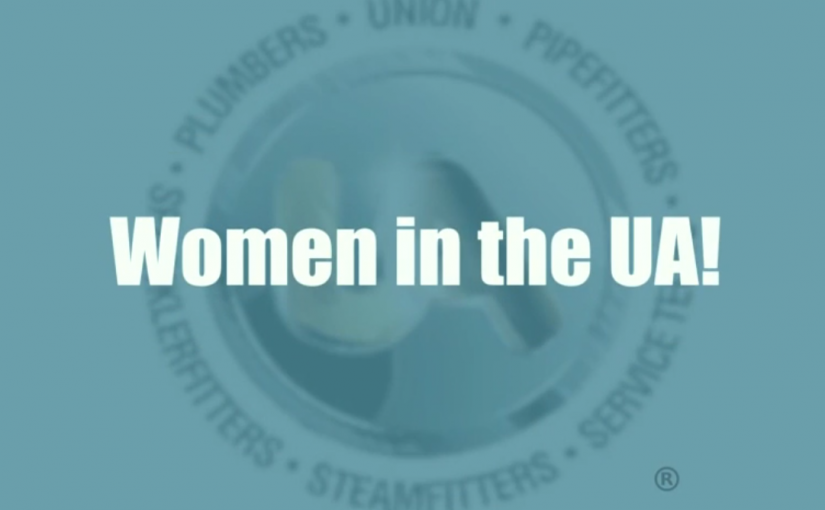 The effective/enforcement date for two provisions in OSHA’s recently revised Recordkeeping Rule has been extended from August 10, 2016 to November 1, 2016.

The deadlines for submitting injury and illness reports remains the same. 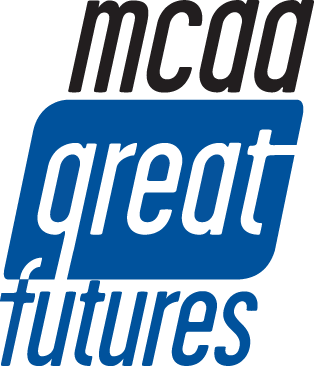 Sixteen faculty members from as many universities came to the P1 Group, Inc. in Lenexa, KS in June for a three-day crash course in mechanical, electrical and plumbing systems (M-E-P) – the 2016 Mechanical-Electrical Academic Consortium’s (MEAC) Faculty Training Camp.

All the sessions were designed to brief faculty on M-E-P basics and suggest effective ways to teach the information to students. The P1 Group not only hosted the conference this year, but also arranged tours of its fabrication facility and a new addition to the Olathe Medical Center that’s under construction. Thanks to the P1 Group for hosting the conference and arranging the tours, Shannon Nicklaus for organizing the conference and to MCERF and Electri International for their financial support!

MCAA has just made available its Safety Bulletin with information about the Occupational Safety & Health Administration’s (OSHA) revised recordkeeping rule to Improve Tracking of Workplace Injuries and Illnesses.

The revised rule requires affected employers to electronically submit, annually, specified occupational injury and illness information directly to the agency. The bulletin provides information on key compliance dates and a summary of recently amended provisions in the rule (29 CFR 1904). 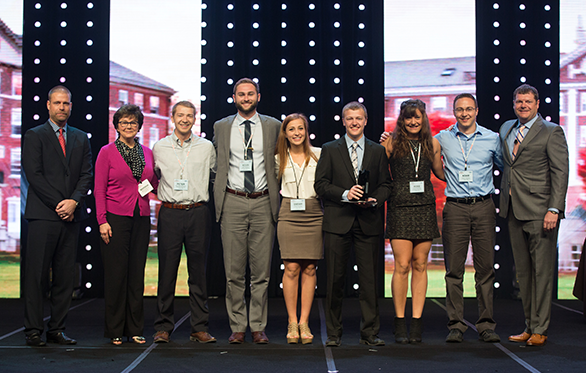 Outstanding MCAA student chapters, an educator and students’ achievements were celebrated at the Annual Awards Breakfast on March 23.

Career Development Committee Chairman Troy Aichele awarded trophies and cash prizes to the finalists of this year’s Student Chapter Competition: first prize and $10,000 went to Student Chapter for Mechanical/Electrical Specialty Contracting at the University of Nebraska-Lincoln and the $5,000 prize for second place went to the Rocky Mountain Chapter of MCAA at Colorado State University.

The Mechanical Contracting Education & Research Foundation (MCERF) has received a $5,000 donation from the MCA of Houston, raising its total contribution to $102,500.

The Board of Trustees greatly appreciates the contribution which helps fund MCERF’s education and research activities that keep our industry growing and thriving. Find out more about MCERF activities by clicking on the link below and then consider making a donation.

The Piping & Service Coalition, a Western New York partnership of more than 50 contractors and nearly 1,000 highly-skilled union craftspeople represented by Plumbers & Steamfitters Local Union No. 22, has made a $25,000 pledge to the Mechanical Contracting Education & Research Foundation (MCERF), a first-ever labor-management contribution.

The pledge will be paid in five $5,000 installments over the next five years, the first installment was presented earlier this month.

Robert Beck, president of John W. Danforth Company (Tonawanda, NY), and a proud member of the coalition, told MCERF “…the mission of the P&SIC is the promotion, advancement and education and training of the piping and service industry.” He noted that the coalition saw common values between themselves and MCERF in their mutual commitment to member education, which is what convinced them to make their pledge.

MCERF President Mark Rogers and the Board of Trustees expressed their deep appreciation for the generous support and the coalition’s commitment to education. Find out more about MCERF programs and how they benefit our industry by clicking on the link below.

The MCERF Board of Trustees is very grateful for the contribution, which helps the Foundation continue its education and research programs that help our industry thrive and grow. Find out more about how MCERF is working for you and then donate by clicking on the link below.

The Reilly Family Memorial Scholarship will be awarded in $5,000 annual increments to a worthy student for the next 10 years.

The MCERF Board of Trustees is very grateful for the generous gift in support of future industry professionals. Find out more about the MCERF program, its activities and the support it continues to provide to advance the industry through education and research. 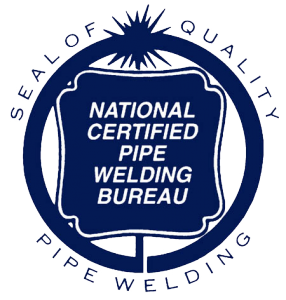 Brandon Boyd and Josh Wilson of Mathey Dearman, Inc., a manufacturer of pipe fabrication tools, explained how modern technology is affecting the productivity, quality and safety of projects. Real-world examples of success and challenges and the development of new materials and alloys and their effects on processes and equipment were aso  covered. Tim Gittens of Liburdi Dimetrics Corporation led a session about “Optimized” Orbital Welding, a process that can be used to isolate and manage welding process variables to produce defect-free—or optimized—welds.

Plan on attending next year, April 23-26, in San Antonio, Texas.